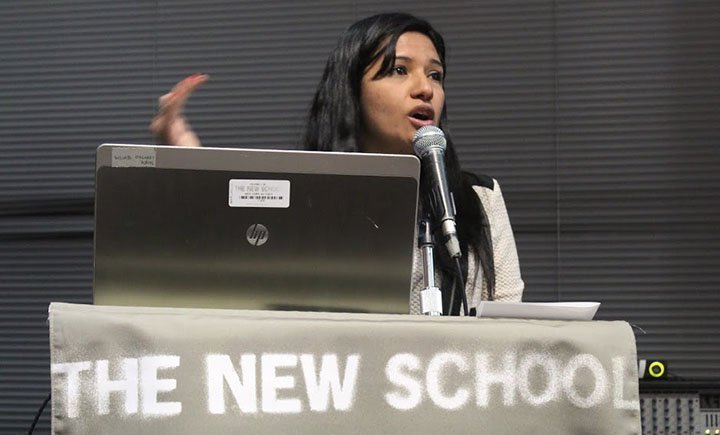 Beatriz Pilar Córdova Aquino, from Lima, Peru, successfully completed a two-week academic exchange at The New School in March of 2015. During the Fellowship, Beatriz worked to deepen her research and work related to the political participation of women in provincial and district elections in Peru following the implementation of a gender quota mechanism. Several studies have reported the Peruvian case as a successful model of gender quota implementation to the extent that, after the application of this mechanism, the participation and election results of women increased significantly at both the national and subnational level. Beatriz’s work presents a more complete picture of the reported success story by contrasting election results with the position on election lists given to women in recent regional and municipal elections. Her results show that inequality in elections continues to persist in the country and further policies should be implemented to promote gender equality in Peru’s electoral system.

Beatriz Córdova is a professional in political science and education with more than seven years of experience in public service. She currently works for the Center of Electoral Processes Operations (COPE), where she monitors activities related to Peru’s regional and municipal elections. Prior to her work at COPE, she worked for Peru’s National Jury of Elections as a specialist in political analysis and a communications analyst for the Center of Electoral Processes Operations (COPE). She holds a Masters in Governance and Electoral Processes from the Instituto Universitario de Investigación Ortega y Gasset in Spain and will begin second Master’s Degree in Gender Studies in the Fall of 2015.

During Beatriz’s two weeks in New York City, she had the opportunity to present her work and receive feedback from New School faculty and students in two seminars and to attend a graduate level course Public Policy in Action: Advancing Social Equity in America. She also met individually with academics and practitioners in her field.

During Beatriz’s two weeks at The New School, she was required to present her work during two closed-door seminars with New School faculty and students. These exchanges are opportunities for the Fellow to receive detailed feedback on their ongoing research and preparation for their final presentation.

On February 24th, 2015, Beatriz had her first seminar with Professors Michael Cohen, Lisa Servon and Jeff Smith, OLA Coordinator Desiree LaVecchia, and graduate students Belen Terceros (The New School) and Stephen O’Connell (CUNY). Beatriz presented her research to the group, starting with a brief overview of Peru’s electoral and gender quota system and then explained how her research shows that the gender quota itself is not enough to achieve gender equality in electoral politics. The seminar group raised several important questions for Beatriz to consider as she moves forward in her work, including: Would having a pre-determined number of women in the legislature necessarily be a good thing? Has the quota system effectively pulled women in from less-formal (organizational roles, community-based, activists, organizers) leadership roles into the electoral process? How high are the stakes for women to be included in elections? Do any women in the last positions ever actually win an election? If they do, are there follow-on effects in subsequent elections?

Beatriz’s second seminar was held on March 3rd, 2015 and was attended by Professors Michael Cohen, Sakiko Fukuda-Parr, Lily Ling, Christopher London, Alberto Minujin, and Maxine Weisgrau, OLA coordinator, Desiree LaVecchia, graduate students Maria Carrizosa and Martha Jaimes. The seminar also included members of a delegation from the Universidad Nacional de San Martin presided by Rector Carlos Ruta, the director of the PNK Fellowship from UNSAM, Marcelo Bufacchi, and Lic. Solange Novelle. This seminar focused on redefining the central question of Beatriz’s work and on sharpening her argument. Having met with professional and academics in the field, her research had broadened, and strengthened. With the help of faculty and students in the second seminar, Beatriz prepared for her final public lecture presentation. 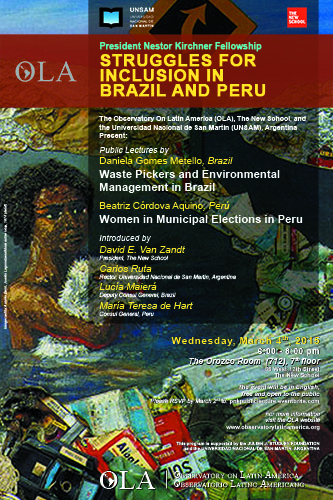 On March 4th, 2015, PNK Fellow Beatriz Pilar Córdova Aquino presented her research alongside PNK Fellow Daniela Metello in a Public Lecture, “Struggles for Inclusion in Brazil and Peru” held in the Orozco Room at The New School. The lecture was attended by a large audience, including faculty, students, a documentary film maker, and the general public. New School President David Van Zandt and Carlos Ruta, Rector of Universidad Nacional de San Martin from Buenos Aires opened the evening, noting the history of the PNK Fellowship program, the successes of Beatriz and Daniela and the opening of the 5th Edition of the Fellowship. Margarita Gutman, Co-director of the OLA, then introduced Beatriz, noting her career, academic history and her current research as a means to situate the audience to the topic.

Beatriz clearly articulated her analysis of gender equality in Peru’s electoral politics in relation to the gender quota mechanism to a packed audience. She began with a brief history of women’s electoral rights in Peru, highlighting women’s suffrage in 1955 and the implementation of the gender quota in 1997. She then explained the basics of the country’s electoral system, and how the provincial and municipal districts operate. After presenting this basic information, she set out to answer the following questions: Has the gender quota system changed the patterns of women’s positions in the political parties’ candidates’ lists? Do women have the same opportunities to participate in politics as men? Do women have equal opportunities to become authorities?

Beatriz’s presentation was enhanced by a wealth of data related to the gender quota in Peru. Her analysis of the data showed that inequality in elections continues to persist in the country and that the gender quota mechanism alone will not close the electoral gender gap in the country. Beatriz explained that achieving gender equality in Peru’s electoral system will happen through not only policy changes, but challenges to current social and cultural norms. She closed her presentation with some challenges she hopes to address as she furthers her research and work: Are the elected women making a difference in the political agenda? Is the gender quota having an impact on less formal leadership roles? What are the political parties’ inner obstacles to include women? What strategies have the political parties developed to include women?

+ What is it like to be a President Néstor Kirchner Fellow?, by Beatriz Córdova Aquino

The PNK Fellowship has been expanded to all Latin American and Caribbean countries, and will award four fellowships for 2015-2016! Information is open, and submissions are received from March 1st to May 25th, 2015