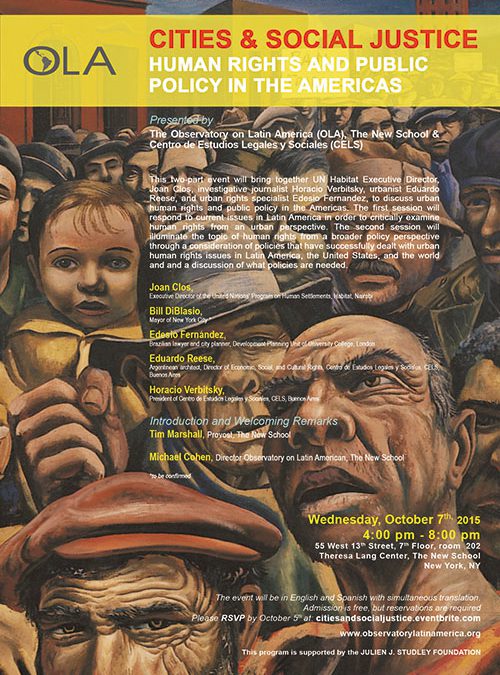 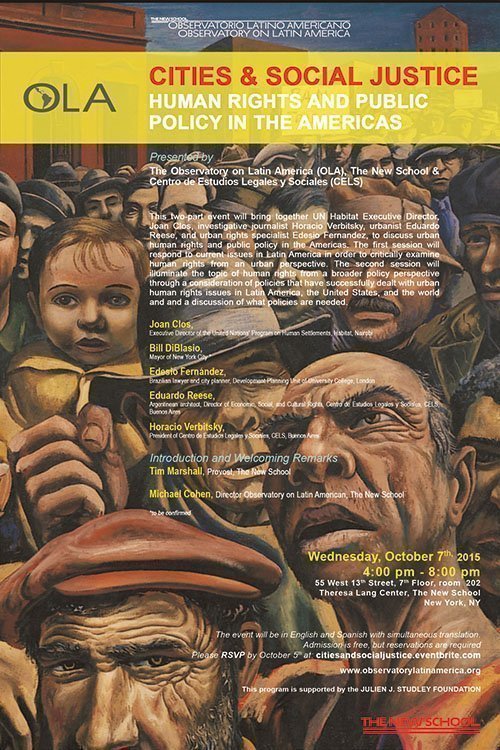 This two-part event will bring together New York Mayor Bill de Blasio, journalist and human rights advocate Horacio Verbitsky, urban and community planner Ron Shiffman, urbanist Eduardo Reese, urban rights specialist Edesio Fernandez, and Don D. Chen Director of the Just Cities Program of Ford Foundation, to discuss urban human rights and public policy in the Americas.
The first session will respond to current events such as issues of race, class, police brutality, etc. in the Americas to critically examine human rights from an urban perspective. The second session will illuminate the topic of human rights from a broader policy perspective i.e. what policies have successfully dealt with urban human rights issues in Latin America, the United States, and the world and what policies are needed.

The event is, free and open to the public
Seating is limited, reservations are required
RSVP by October 6th to citiesandsocialjustice.eventbrite.com

Brief Bios of the speakers

Bill De Blasio is the Mayor of New York. and has strongly championed the rights of the poor in New York City. His Administration has been pro-active in addressing the inherited crisis in housing, education, and race relations in New York. He also has personal experience working in Latin America and is well-placed to discuss the current issues he faces in the broader context of human rights in cities in the Americas.

Edesio Fernandez is a Brazilian lawyer and social scientist who is a Professor of Urban Studies at University College, London. He has extensive global experience working on urban human rights. Most recently he has been involved in the Right to the City movement which has gathered growing support in Latin America.

Eduardo Reese is an architect and specializes in urban and regional planning. He is Director of Economic, Social, and Cultural Rights, Centro de Estudios Legales y Sociales,CELS, Buenos Aires. He is professor of urban management at the National University of General Sarmiento. He has been a major promoter of the Law on Fair Access to Habitat enacted by the Legislature of the Province of Buenos Aires in 2012. In previous professional positions, he was technical advisor for the master plans of more than 20 cities in Argentina; Secretary of Socioeconomic Policies, Ministry of Human and Social Development of the Province of Buenos Aires; advisor to the Council of Urban Planning of the City of Buenos Aires; and Secretary of Planning in the city of Avellaneda.

Ron Shiffman is a city planner with 40 years of experience providing program and organizational development assistance to community-based groups in low- and moderate-income neighborhoods. He received the 2012 Jane Jacobs Medal for a lifetime leadership, awarded by the Rockefeller Foundation. Trained as an architect and urban planner, he is an expert in the areas of financial packaging, innovative community-based financing, real estate development, and community-based planning. He has had extensive experience bringing together private and public sector sponsors of housing and related community development projects. In 1964, Ron Shiffman co-founded the Pratt Institute Center for Community and Environmental Development [PICCED]. In addition to his former role as director of PICCED, he is a tenured professor at Pratt Institute’s School of Architecture.

Horacio Verbitsky is one of Argentina’s leading investigative journalists, and a columnist and press freedom activist. Verbitsky has built his distinguished career by fearlessly exposing government corruption and battling restrictive press laws. His best-selling book The Flight contained the first public confessions of an official involved in Argentina’s “dirty war”. Verbitsky has played a front-line role in strengthening democracy and safeguarding press freedoms in Argentina and Latin America.

+ Read on the development of this event