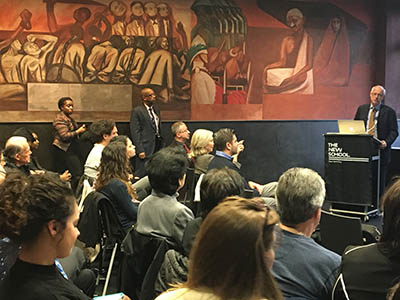 On April 19th, the Observatory on Latin America (OLA) and the Studley Graduate Program in International Affairs (GPIA) at The New School hosted a presentation by Ambassador Anayansi Rodríguez Camejo, Permanent Representative of Cuba to the United Nations in New York. Ambassador Rodriguez has had an important diplomatic career which spans more than two decades. Mary Watson, Executive Dean of The New School for Public Engagement, gave a warm welcome to the Ambassador, in front of an eager audience. Then, professor Michael Cohen, Director of the OLA shared the story of Julien Studley, one of The New School’s trustees, who was always keen to Cuban-related activities within our university as he was himself a World War II refugee, who was welcomed in Cuba for some years before coming to New York. 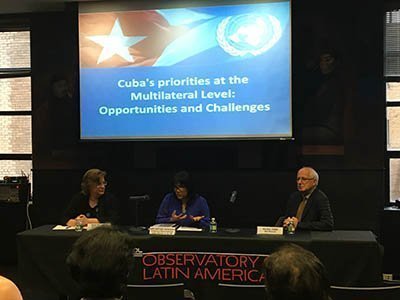 Ambassador Anayansi Rodríguez thoroughly explained the four pillars of Cuban foreign policy: solidarity, internationalism, anti-imperialism, and utility among Third World countries. In explaining these pillars, she stated: “Cuba rejects any hegemonic or discriminatory practice in international relations. Cuba also rejects interference in the internal affairs of other states, the threat or use of force, the adoption of unilateral coercive measures or aggression (like the US blockade to Cuba), and any form of terrorism”. Ambassador Rodríguez recounted some of the impressive outcomes in Cuban foreign policy in the year 2016. Among others, she mentioned the Cuban role as guarantor in the Colombian peace process, its active contribution in the fight against Ebola in Sub Saharan Africa, and its promotion of high level diplomacy like the bilateral meeting Cuba arranged between the Pope and the Russian Orthodox Church leader Kirill. 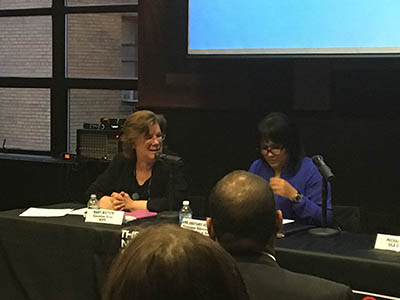 The Ambassador’s talk was filled with incisive comments. For instance, about solidarity she argued: “Cuba stands by the principle of sharing what we have, not what is left over”. She also said: “more than 51,000 Cuban health care workers offer services in 67 countries worldwide”. Moreover, she affirmed: “South-South cooperation is not a substitute but a complement of North-South cooperation”. On internationalism, Rodriguez argued that: “The struggle against terrorism cannot be a pretext for interference, aggression, or violation of the international law”. She also added: “An important challenge in sustainable development is making developed countries respect their ODA commitments”. With regards to peace the Ambassador said: “Latin America was the first region of the world to be proclaimed a zone of peace, free of nuclear weapons”. In her comments on the US-Cuban relationships, Rodriguez sharply noted that the blockade (which has caused damages over 125 billion dollars by conservative estimates) continues to be a policy priority. Despite the 2016 UN resolution against the blockade, that had 191 votes in favor, non against, and only two abstentions (US and Israel), the Ambassador asserted the executive measures adopted since the restoration of the diplomatic relations between the two countries are well directed, but still limited in scope. 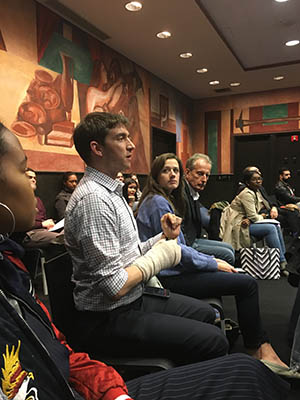 Then, Dean Watson opened the floor for questions from the audience, asking the Ambassador to give her advice to the many young professionals, faculty, and researchers interested in Cuba who were present in the room. Professor Cohen asked her how Cubans perceive the pace of change in the island in this moment of transition. Members in the audience asked about Nicaragua, about nuclear disarmament, and various other interesting questions, which the Ambassador took on seriously and also graciously. We hope this is the first visit of the Cuban UN Ambassador Anayansi Rodríguez Camejo to The New School.


This program is supported by the JULIEN J. STUDLEY FOUNDATION