The Observatory on Latin America (OLA) is pleased to announce: 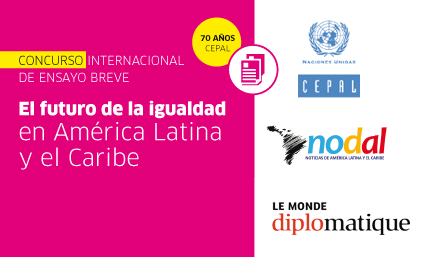 The Economic Commission for Latin America and the Caribbean (ECLAC), along with the Southern Cone edition of Le Monde diplomatique and the Nodal Latin American and Caribbean News Portal, called for submissions to an international short essay contest on the future of equality in the region.

The activity is part of the commemoration of ECLAC’s 70th anniversary, which will be celebrated in 2018, and it is aimed at young people up to 35 years of age.

This international contest is open for people from different fields and professions to present new work, in the form of a short essay, that contributes to the discussion about the future of equality in the region based on its multiple perspectives, dimensions, problem areas and conditioning factors.

For guidance purposes, this issue can be approached from the perspective of the citizenry, gender and visions about equality; the environment and development patterns; technological change, the future of work and social protection; and productive development and financialization, among others.

The essays must be written by individual authors, and each author can only submit one proposal.

The two winning pieces will be published in the Southern Cone edition of Le Monde diplomatique and on Nodal, and their authors will be invited to present their work at ECLAC’s headquarters in Santiago, Chile in 2018.

In addition, the contest judges will award up to eight honorable mentions that, along with the first two essays in the order of merit, will be published in an ECLAC compilation.

The essays should be sent to the email address concurso70cepal@cepal.org by the deadline of January 31, 2018.

View the rules (in Spanish)

Visit the ECLAC annoncement page (links to Spanish and Portuguese)