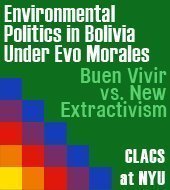 When Evo Morales became the first indigenous president of Bolivia in 2006, concerned citizens and environmentalists from around the globe looked hopefully to his leadership in environmental politics. From the Buen Vivir development model to the Law of Mother Earth, the Morales administration touts some of the most progressive environmental policies of any government in the world. Internationally, Bolivia is heralded for these innovative policies. At home, the nation faces a pressing dilemma, that of choosing between an environmentally-conscious development logic and large-scale projects for natural resource extraction that will damage the nation’s environment.

This one-day conference asked: How can a nation that is dependent on natural resource extraction chart an environmentally-conscious course to economic development and justice?