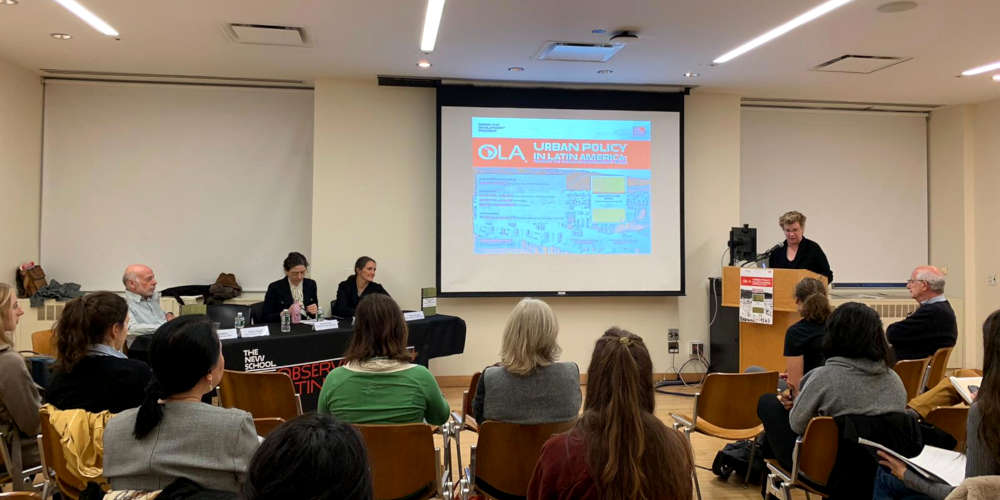 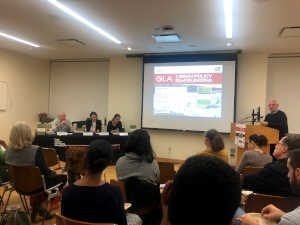 On October 16th, 2019, the Observatory on Latin America (OLA) launched this recently published book that evaluates the impact of 20 years of urban policies in six Latin American countries: Argentina, Brazil, Chile, Colombia, Ecuador and Mexico. The book is organized in four parts: an introductory section, which includes an overview comparative chapter on urban policy in developing countries; six country case studies; two chapters on the quantitative evaluation of urban performance in Latin America and the challenges of monitoring the implementation of the urban goal of the SDGs and the New Urban Agenda; and two final chapters, one a cross-cutting analysis of the experiences of the six countries, and the other a forward-looking conclusion about the importance of transforming urban practice to better achieve urban policy goals.

Mary Watson, Executive Dean of the Schools of Public Engagement offered some welcoming remarks and celebrated that the OLA continues having an active academic agenda. Michael Cohen, Director of the PhD Program in Public and Urban Policy and OLA CO-director, offered an insiders approach into how this book came into being, from discussions in the corridors of the Habitat III preparatory meetings, to a workshop with all the authors sponsored by the Latin American development bank CAF, in Argentina, to the launch of the Spanish version of the book in Quito. He then shared highlights from each of the country chapters, as summarized below. 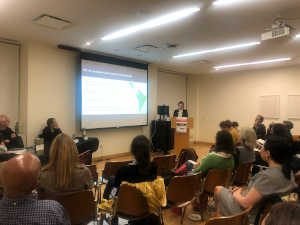 The Mexico chapter prepared by Alicia Ziccardi and her team in the University Program of Studies on the City (PUEC) of the National Autonomous University of Mexico (UNAM) offers an informed view to understand in detail the case of Mexico. It begins by establishing the general political and economic context in four presidential six-year terms from 1994 to 2016 It then provides an overall assessment of urban policy developments over the period, supported by a statistical database and analysis of the urban legal framework. This approach makes it possible to establish that public policies have weakened in their impact, that urban strategies prioritized neoliberal and private-sector approaches to housing provision, that the participatory bodies have limits to their effectiveness, and that a sectorial vision focused on housing undermined the integrity of territorial policies as a whole. Ultimately, the net impacts of these policies were numerous negative effects in the quality of life of citizens.

The chapter on Chile was written by Alfredo Rodríguez and Paula Rodríguez of SUR, the Southern Corporation for Social and Education Studies, a Chilean nongovernmental organization (NGO). The authors review the significant progress made in Chile over this period in terms of poverty reduction, per capita income growth, social housing construction (more than 1.5 million units built, curbing the quantitative deficit), and almost full coverage of urban infrastructure, among others. However, the authors contend that the Habitat II commitments were not met in Chile. They explain that these commitments were not binding, but rather were based on universal rights without any reference to specific action plans, budgets, or implementation mechanisms to ensure their effective compliance. It is striking that in the Mexican and Chilean cases, the critiques made by these authors is based on an assessment of the large-scale efforts and results on the ground. 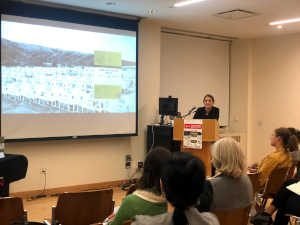 The Brazilian chapter, by Edesio Fernandes, a well-known Brazilian urban expert, lawyer, and professor at University College, London, is unique in its audacious and somber tone, undoubtedly affected by the political upheavals occurring in Brazil while this work was being written. Brazil has played a role of regional – and even global – leadership in the normative realm of urban policy. This includes constitutional reforms recognizing the “social function of property” and the regulation of territorial planning at the municipal level incorporating redistributive instruments for urban land management. However, legislative reforms do not necessarily ensure effective implementation across the country as a whole. Fernandes explains that lack of efficiency of urban planning is not only related to the absence of regulation or resources, but it is also due to its excessively formal and unnecessarily obscure language, producing a dissociation between planning and urban management. Even more disturbing is the observation that “urban planners and administrators have not understood the dynamics of speculative exclusion from which they themselves originate”.

Jorge Enrique Torres Ramírez, author of the chapter on Colombia and a long-time urban analyst at CENAC, identifies similarities with other countries in issues such as the dominance of housing policy over urban policy, noted in Mexico and Chile, or the paradox of decentralization in the Brazilian case. But some other aspects are unique of the Colombian case. For instance, the role of internal armed conflict in Colombia’s urbanization process, the atypical progressive densification of major cities, the prevalence of tenants in the real estate market, and the absence of the “houses without people” phenomenon found in other Latin American countries. Among other interesting points, Torres presents information that suggests the existence of a new window of opportunity in Colombia for housing and neighborhood upgrading within new environmental policies of mitigation and adaptation to climate change. 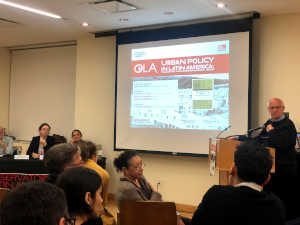 The Argentine chapter, written by professors and activists Eduardo Reese and Andrea Catenazzi, focuses on four questions: 1) What commitments did the Habitat II document establish? 2) What were the actions defined in the national agenda? 3) What were the key public issues in that period? 4) What were the significant actions by civil society? This approach allows a balanced reading of the issues and highlights the role of different constituencies, including their responsibilities, possibilities, and achievements. The authors’ assessment looks at accomplishments while also identifying the “pending challenges” for Argentina. Reese and Catenazzi prioritize two urgent tasks that the national urban agenda must address. First, the regulation of land markets, which requires more than the issuance of rules and regulations to achieve effective implementation. The second pending issue is the “territorial integration of sector policies”.

The authors of the Ecuador chapter, Fernando Carrión, a well-known urban planner, author, and professor at FLACSO-Ecuador, and Alexandra Velasco sharply criticize the 20-year gap between these urban summits and the fact that the adoption of agendas and commitments is disconnected from their actual fulfillment. They wonder if the time has come for local governments to be the main actors in this process, because without giving a voice and vote to the cities, which are responsible for implementing the subscribed agenda, what is at stake is an “unacceptable ventriloquism”. They also explain that urban growth rates have declined, intermediate cities have gained preponderance, and globalization is increasingly determining urban issues. International migration, drug trafficking, and remittances – both economic and cultural – are the driving forces behind current patterns of urban development in Ecuador. 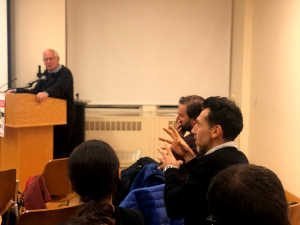 The next presentation in the book launch was that of Martha Susana Jaimes, PhD candidate in Public and Urban Policy at The New School. Jaimes shared the regional findings of the quantitative analysis of the Habitat Commitment Index, an analytic tool developed at The New School, intended to assess the efforts of 169 countries in the world in complying with the commitments agreed in the Habitat II agenda. Among the interesting findings for Latin America was the overall improvement in poverty and gender indicators, and the enormous challenges in institutional capacity.

Following, Maria Carrizosa, PhD candidate in Public and Urban Policy at The New School, shared eight transversal conclusions extracted from the six country chapters. Among them, Carrizosa mentioned that -alarmingly- housing policy has not only replaced urban policy, but has gone against it, as the phenomenon of “houses without people” reveals. 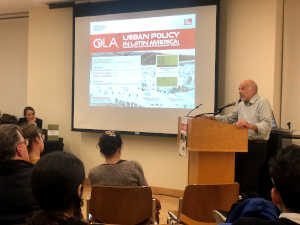 These presentations were commented upon by Thomas Angotti, Professor Emeritus of Urban Policy and Planning at Hunter College and the Graduate Center, City University of New York, and author with vast experience in Latin America. Angotti praised the insights in the book and welcomed the fact that Latin American authors have exposure to an English-speaking audience.

To learn more about this book see more information here