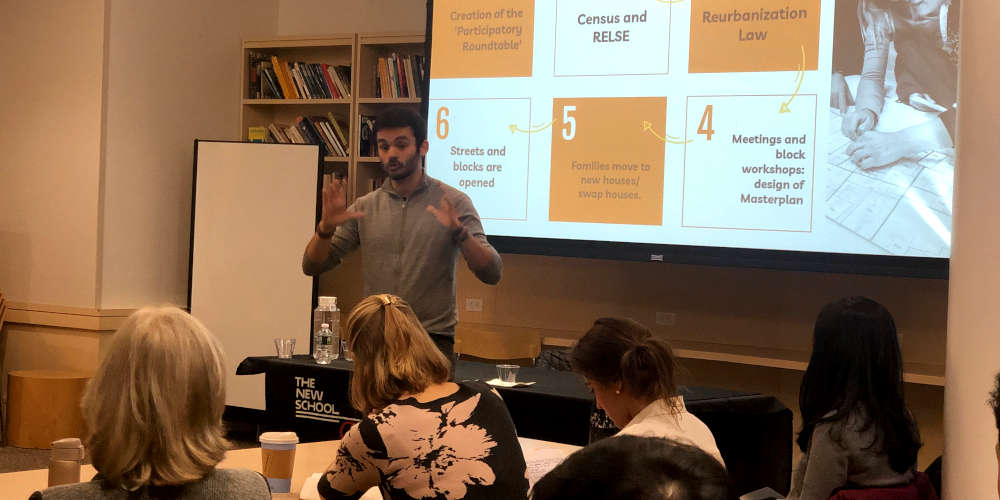 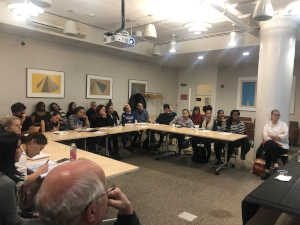 Slums are not homogeneous, and there are many diverse vested interests that exist in slums that challenge upgrading initiatives. All of these interests must be properly understood and brought into the planning process. The best way to do this is through negotiated development, in which people participate in negotiating their rights and understand that all the different interests have rights that need to be brought into the equation. On November 5th, Juan Ignacio Maquieyra, President of the Housing Authority of the City of Buenos Aires, Argentina -Instituto de Vivienda de la Ciudad – IVC- spoke about the opportunities and challenges in participatory development in the slum Villa 20, during his lecture “How Process affects Outcomes: Slum Upgrading in Buenos Aires” at The New School. The talk was introduced by Michael Cohen, Director of the Public and Urban Policy doctoral program, and faculty and students of the Schools of Public Engagement participated in the event. 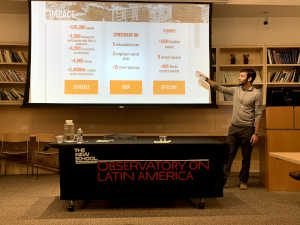 For the past 2 years, the IVC has been working in Villa 20, a slum with close to 30,000 residents in the southern area of the city of Buenos Aires, in improving the following three dimensions: urban integration, housing integration, and socio-economic integration. Currently, 75% of residents live in poverty, most don’t have access to formal basic services, and 49% of dwellings have substandard conditions. When it comes to urban integration, the project’s mantra is unique since it does not follow the traditional model of formalizing the informal. Instead, it seeks to “integrate the slum to the city, but also the city to the slum”. But the perhaps most distinguishing feature of the Villa 20 project is its strong participatory component, where “people are no longer the object of public policies, but the subject”. Maquieyra explained that, from the IVC perspective, higher levels of participation from the neighbors will make the project more sustainable. The OLA has collaborated with the IVC in creating a monitoring framework to track short and long-term effects of the project on the livelihoods of residents, and to create evidence of the role of participation in the process. 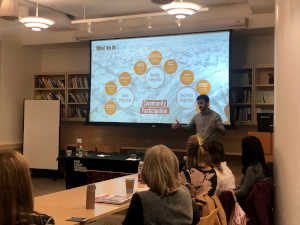 The participatory process takes place in spaces and meetings such as the “Participatory Roundtable” (Mesa de Gestión Participativa) and the “Blocks’ Workshops” (Talleres de Manzana), where the neighbors participate in re-designing their neighborhood. In these workshops, neighbors discuss interventions such as street openings or the location and amenities of public spaces, which affect not only the urban design of the slum but also its people’s quality of life. The community also decides on housing improvements, the provision of new housing, or the distribution of loans to move to other neighborhoods of the city. According to Maquieyra, the neighborhood is now completely planned thanks to the community’s involvement. Families show high levels of satisfaction with the final plans, 84% of families that participated from the Blocks’ Workshops are satisfied with the final projects, as well as the information received from the IVC. 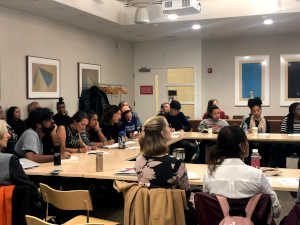 Maquieyra highlighted the benefits of a participatory approach to the design of public policies. In the case of Villa 20, the “cost of the participation process” represented only 1,3% of the total project cost, and the benefits outweighed the cost by far. This helped the project to be scalable, deep and effective. In three years, there were more than 1500 instances of participation that helped reach a consensus on urbanization laws and master plans.

Some of the largest challenges in the process, as described by Maquieyra, relate to the socio-economic situation of families. In May 2019, the IVC and the OLA conducted a survey with 60 families that moved to the new houses built by the IVC as part of the upgrading project. The survey aimed at collecting information on financial sustainability, participation, appropriation, and coexistence of the families. Even though families reported high levels of participation and are satisfied with their new houses, the financial situation remains a challenge: 33% of the households spend more money than what they earn and 58% of families fail to make mortgage payments. It is, however, encouraging to see that the IVC is using this evidence to re-design mortgage plans and the cost of subsidies for basic services, as well as the provision of spaces for commercial activity. 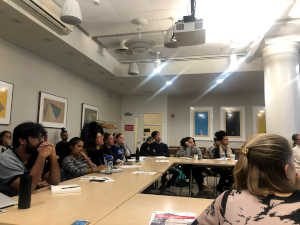 Finally, Maquieyra answered questions from the audience about the sustainability of the preexisting housing, risks of gentrification, and the challenges of socio-economic integration, among others.