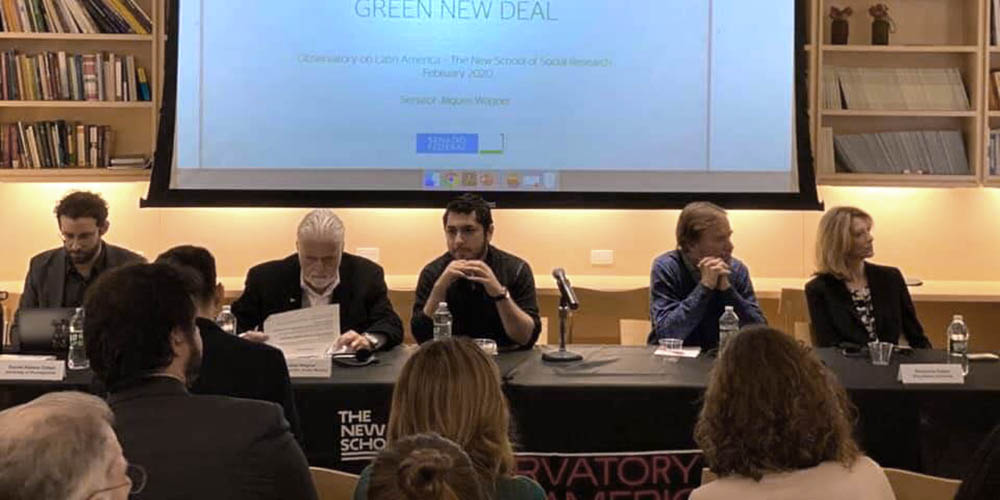 This month Jaques Wagner, current Brazilian Senator and former Governor of the state of Bahia, joined Stephanie Kelton, Senior Economic Advisor to the Bernie Sanders Presidential Campaign, and Randall Wray, Senior Scholar at the Levy Institute, and Daniel Aldana Cohen, Director of the Social Spatial Collaborative (SC)² at the University of Pennsylvania, in a discussion about a Green New Deal and environmental policy responses to the climate emergency in Brazil and the United States. The Observatory on Latin America and the student group Reconvexo Collective hosted the panel discussion on Feb 5th, 2020, moderated by Milano New School Doctoral student Andres Bernal. 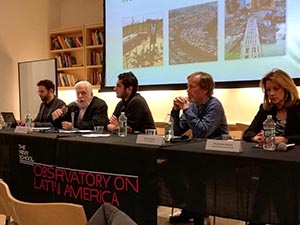 The panel began with Senator Wagner discussing “The Big Push”, a national agenda introduced into the Brazilian Senate which outlines the goals of seeking economic growth and reductions in inequality through heavy investment in environmental sustainability and renewable energy. Senator Wagner also offered an overview of the Brazilian economy, the environmental and social impact of the fossil fuel economy, and the reality of worsening climate and environmental consequences under the status quo while addressing the technical prospects for sustainability in the nation.

Daniel Aldana Cohen followed with a substantive discussion focusing on the political vision and design of a Green New Deal as detailed in his co-authored book A Planet to Win: Why we need a Green New Deal. Aldana Cohen emphasized the necessity for massive investment and international collaboration to rethink built environments and spatial politics to meet human and environmental needs while democratizing public power itself. 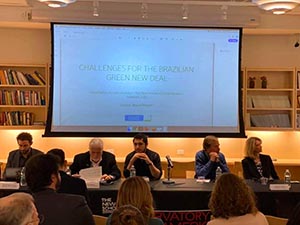 The panel concluded with presentations from Randal Wray and Stephanie Kelton who outlined the macroeconomics of a Green New Deal in the United States invoking the 1940 publication by John Maynard Keynes, How to Pay for the War and the growing interest in Modern Money Theory as an analytic lens. In their presentations, they highlighted the importance of moving away from household comparisons of Sovereign currency-issuing governments that seek balanced budgets towards a Functional Finance approach evaluating resource availability in order to achieve full employment, meet public objectives, and securing price stability. Public finance for projects such as a Green New Deal is thus constrained by structural arrangements and productive capacity as opposed to tax revenue requirements. The panel concluded with discussions about the differences across the Americas for public Green Investment given differences on a spectrum of monetary sovereignty and domestic industrial capacity and thus issues of geopolitics international affairs.