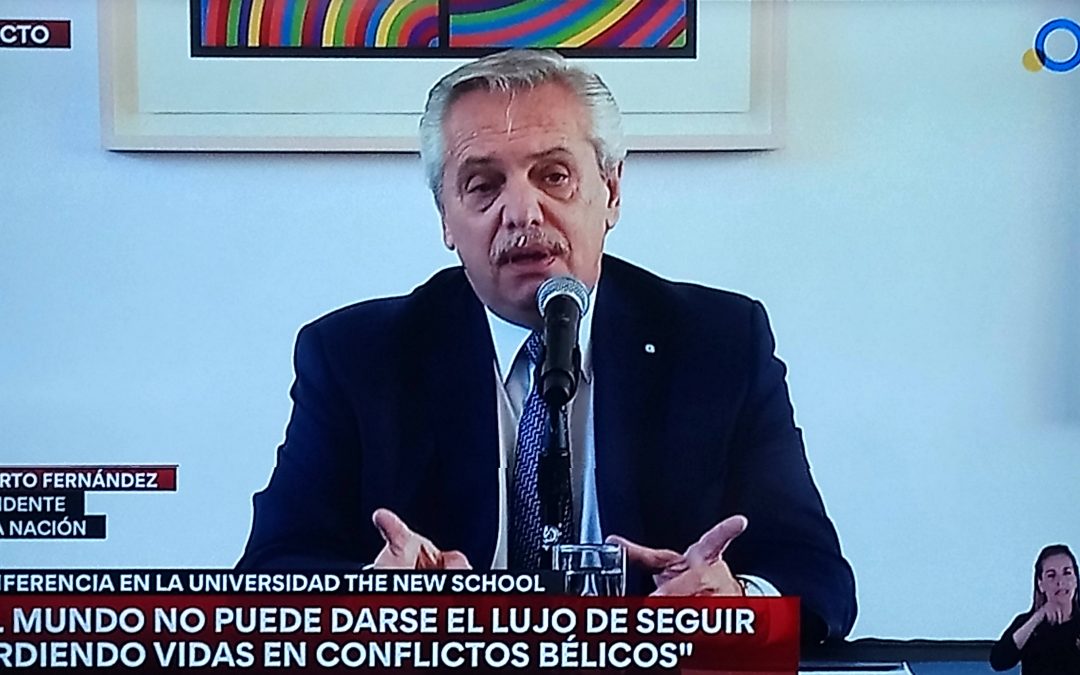 Alberto Fernández, President of Argentina, delivered a speech entitled “Facing Global Challenges: A Latin American Perspective” on The New School on September 20, 2022, at the invitation of the Observatory on Latin America of the Julien J. Studley Graduate Program in International Affairs. He was accompanied by the Minister of Foreign Affairs, Santiago Cafiero; Minister of Security, Anibal Fernandez; Minister of Education, Jaime Perczyk; and Jorge Arguello, Ambassador to the United States; Ambassador Maria del Carmen Squeff, Permanent Representative of Argentina to the United Nations; and Ambassador Santiago Villalba, Consul-General of Argentina in New York. The event was attended by about 150 people and many representatives of the press and Argentine television.

The President’s visit continued a long tradition of contact between the Argentine Government and The New School community. President Fernández had visited the University ten years earlier when he met with students and talked about his experience about having served as Chief of Cabinet for Presidents Nestor Kirchner and Cristina Fernandez Kirchner, both long-time friends of The New School.

In his speech, “Global Challenges: a Latin American Perspective”, President Fernández invited the university community to reflect on the role of Latin America in the post-pandemic world, a world of inequality and war in which Argentina and Latin America had a possibility to supply energy and food after the war in Ukraine. He spoke about using lithium as a strategic resource. He also strongly repudiated the attempted assassination of Cristina Fernández de Kirchner.

President Fernández described the world as having “changed, but it has not changed in its structure. Rather, the pandemic has exposed the weaknesses and miseries of the unjust system in which we live, the shortcomings and the structural weaknesses of that world”. He expressed his concerns about the escalation of violence and hate speech, describing it as “the new fascism”. He said that “what happened with Cristina (Fernández de Kirchner) a few days ago is the product of the advance of the recalcitrant right-wing “. He observed that “there are no problems with the democratic right, but there should be no place for the right that promotes hatred. The same with the extreme left. Violence cannot have a place in the world we have.”

President Fernández also mentioned Argentina’s communications with the Managing Director of the International Monetary Fund, Kristalina Georgieva. He said: “Yesterday, speaking with Kristalina Georgieva, I told her that poverty is not only in the poorest countries.” He noted that Argentina is classified as a middle-income country, so the international institutions “don’t pay attention to him because he’s neither rich nor poor.”

He also spoke about Argentina’s considerable energy reserves at Vaca Muerta and the country’s capacity to supply energy to the rest of the world: “It is an opportunity for Argentina, but we would be miserable if we were happy with this,” he said. “Argentina has developed renewable energies a lot, we have many resources to be able to do it. And we have the second largest natural gas reserves in the world so we can also help in the transition energy until we can install renewables.”

Climate Change: The President noted that Latin America was heavily affected by climate change, distinguishing the effects on the continent and those in the Caribbean where sea level rise threatened the very existence of many Caribbean nations. He remarked that Latin America forests were the lungs of the world. Yet Latin America was not a major contributor to greenhouse gas emissions. The region was therefore a victim of the behaviors in industrialized countries. Latin America nonetheless had the responsibility to increase its use of renewable energy and to promote the use of natural gas which had less impact on global warming. This investment should be supported by the international community.

The COVID-19 Pandemic: The President commented that Latin America received the COVID-19 virus from Europe and Latin America. He remarked that the virus had affected poor communities more than the rich ones. Yet, at the national level, the availability of vaccine to protect its peoples had been small, with some 90 percent of vaccines used in rich countries outside Latin America. The number of COVID-19 deaths were nevertheless very high. The vaccine situation demonstrated the lack of a global ethical approach to solving global problems. He emphasized that the post pandemic world requires governments and the global community to rethink and strategize on how to address current issues.

The War in Ukraine: The President noted that, at a time that most of the world faced financial and budgetary problems, huge amounts of money were being used by both sides in the war in Ukraine. He asked how could this be justified in a world in great need? President Fernández said that Latin America was at peace, with no military conflicts. The region should take a lead in arguing for peace.

The Role of Latin America: He asserted with an eloquent statement on the need for an ethical approach to these issues in which the region contributed to solving global problems while at the same time addressing their national and local needs. He asserted that the international financial institutions should not expect countries with debt to be able to pay off that debt in the current situation of the consequences of the pandemic and the food and energy crises caused by the war in Ukraine.

He concluded his remarks by saying that Latin America has the potential to contribute with food and energy to the world which are key resources during these times. But this contribution should be made while advocating for peace and social justice.

President Fernandez then answered questions from the audience which included the Government’s strategy for the development of the country’s extensive lithium resources, its policies with regard to migration of refugees to Argentina from neighboring countries particularly in light of climate change, Argentina’s interest in joining the BRICS (Brazil, Russia, India, China, and South Africa) countries grouping, and, having joined the Chinese Belt and Road Initiative, would Argentina join with Brazil and Mexico to develop a new financial architecture as an alternative to the IMF.

The Observatory on Latin America (OLA) would like to recognize and thank very much the important contributions of many people and departments within The New School for their collaboration in organizing and carrying out this event. Within the OLA, the primary person responsible for this event was Caroline Risacher, assisted by Dina Mulyani, Maria Carrizosa, and Belen Fodde. The student volunteers included Lucas Tatarsky, Amila Hadzibaricj, Sofya Krasnaya, Emily Wright, Medha Mogili, Vidushi Goel, and Max Clement Scott. Within the New School for Public Engagement, we would like to thank Executive Dean Mary Watson, Dansha Cai, Jason Nu, and Kate Tooley. Vice-Dean Dansha Cai was particularly helpful in advising the OLA across a wide range of questions and subject areas. The Director of the Julien Studley Graduate Program in International Affairs, Peter Hoffman, provided helpful support. From the Department of Marketing and Communications, we would like to thank Amy Maslin and Merrie Snead for their experienced advice and support. The Facilities Department and the Audio-Visual departments were both immediately responsive to the needs and management requirements of the event. We also very much appreciate the technical advice of Mike Biondo from the Department of Campus Safety.
We would also like to express our deep appreciation to the staff of the Consulate of Argentina in New York under the leadership of the Consul-General, Ambassador Santiago Villalba.