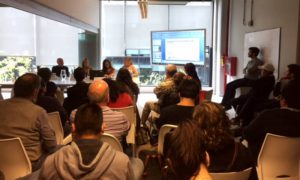 Preliminary findings of two research projects of the Observatory on Latin America (OLA) were presented and discussed on October 26, 2018 at a special session of the Urban Knowledge Dialogues organized monthly by the Instituto de Vivienda (IVC) of the Government of the City of Buenos Aires, entitled “Integration, Participation and Sustainable Development Goals”. This meeting was presided by the President of IVC, Juan Maquieyra and the coordinator of slum upgrading project in Villa 20, Martin Motta.

One of the projects “Monitoring Processes and Outcomes in Slum Upgrading in Buenos Aires” aims to contribute to the transformation of urban practice in Buenos Aires by the development of a monitoring and evaluation system for slum upgrading. The project includes both qualitative and quantitative studies of the process undertaken by the IVC, with a pilot study in Villa 20.

The objective of the other project “Implementing the New Urban Agenda and the Sustainable Development Goals. Comparative Urban Perspectives, Buenos Aires Case Study”, is to assess the process of implementation of these global goals in the Buenos Aires institutional context. The OLA is working with CELS, the Center of Economic, Legal and Social Studies, a well respected human rights organization in Argentina. This project is part of a wider comparative study organized by Mistra Urban Futures (Chalmers University, Sweden) which includes case studies in Kisumu, Kenya; Cape Town, South Africa; Simla, India; Sheffield, UK; and Gothenburg and Malmo, Sweden.

Both of these projects are applied action research efforts in collaboration with local institutions in Buenos Aires, and they are oriented to produce knowledge which could be utilized at the local, national and global levels. This collaboration includes framing of the research, identification, collection, and analysis of relevant data jointly with personnel of local organizations.

With these goals in mind, each project was presented by members of the OLA research team, local and global partners, and city government representatives. Preliminary findings were discussed by an audience of 60 people composed by IVC staff and general public including representatives of Villa 20. These discussions were very important for both projects because it demonstrated the collaborative character of these efforts and produce a clear direction for next steps.