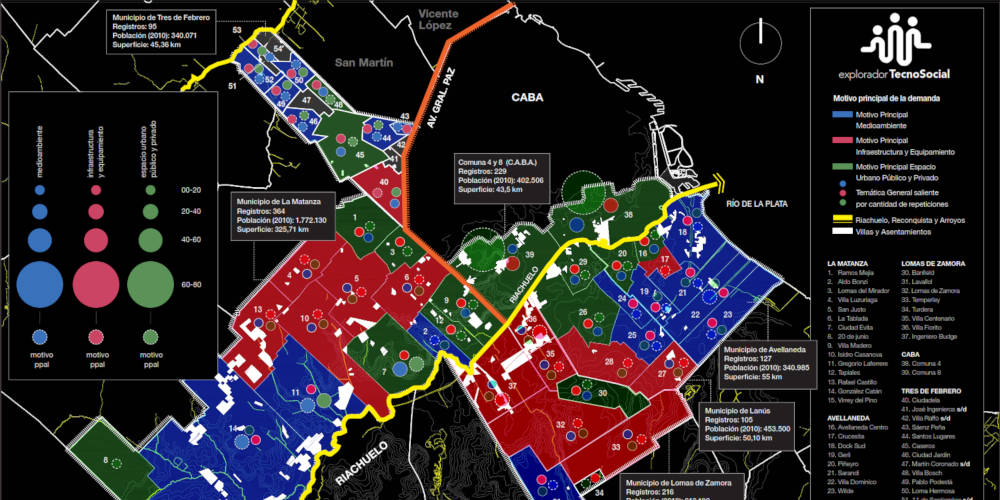 Margarita Gutman will present her work titled “Sociotechnical Explorer: Visual Tools for the Study of Territorial Demands that Emerge in the Digital Space (Metropolitan Region of Buenos Aires 2000-2015)”.
Comments from Bill Morrish. 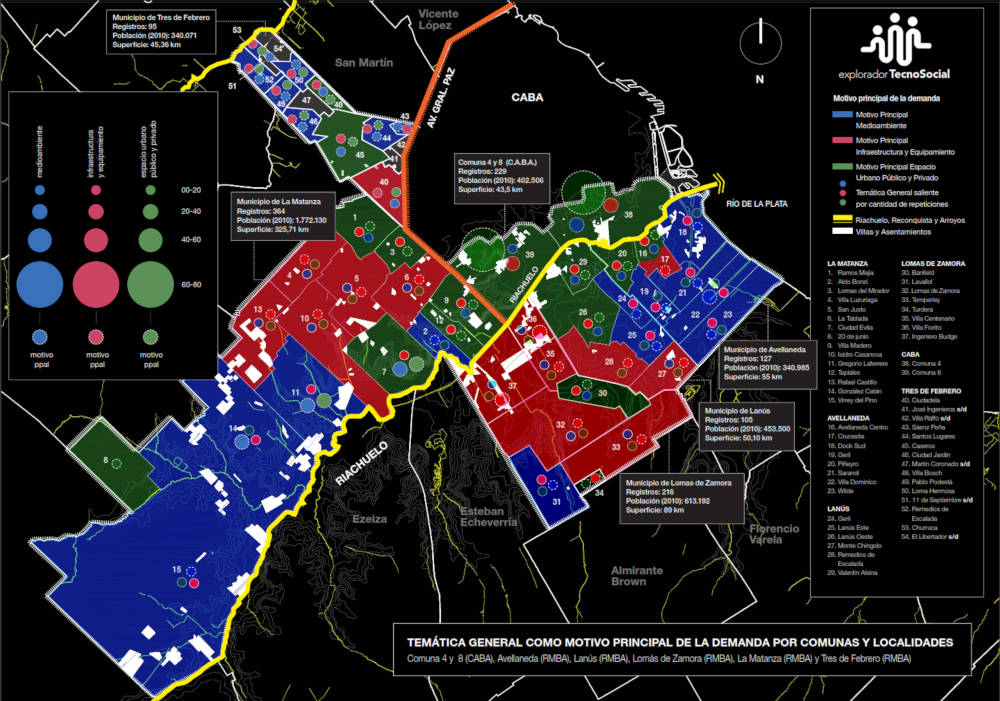 This text presents and discusses the scope of a set of visual tools, created to interpret complex data about territorial conflicts publicized by civil society through webs, blogs, and YouTube. We focus on demands sparked by problems in urban public and private space, infrastructure and environment, associated with hydric basins, sub-basins, and states of vulnerability and risk. These demands are mostly made visible by neighbors’ associations, alternative local media, NGOs, political associations, and individuals.

This work is part of a larger research on the convergence or divergence between disciplinary (urban plans) and extra-disciplinary (civil society proposals) urban anticipations. The images here presented are related to the latter and are centered on the demands publicized in the digital public space of the territory known as Cuenca Baja del Matanza Riachuelo (comprised of the municipalities of Avellaneda, Lanús, Lomas de Zamora, La Matanza, Comuna 4, and Comuna 8 in C.A.B.A.). We assume that the discussion of demands mobilizes proposals and urban anticipations, and that these show local variations.

The methodology for the identification, processing, and survey of more than 1,000 items analyzed entails defining platforms, search engines, and analytical categories, as well as designing interpretive matrices, graphics, and georeferenced maps for visualization, interpretation, and communication of the data.

Specifically, the interpretative matrices are intended to systematize the information, allowing to quantify thematic repetitions and register relevant indicators in the analyzed territories.

The graphics system allows looking at the information at different scales, make visible the relationships and interferences among the categories of analysis, and establish common patterns. The methodology used for the production of the graphics implies the identification of a series of operations that could be classified under the notion of schematization (Costa, 1988), as these procedures translate information into a visual language, or phenomena that is not visible by looking at reality.
In this work, the tools for georeferencing and codification of information have generated new cartographies about the social demands that are outcast from institutional channels. These cartographies are constructed through the elaboration of thematic maps, points distribution maps, symbols maps, and cartograms, making possible the comparison of the registered cases with the territory captured by digital cartographies in Google-Google Maps, Google Street View- understood as a proxy for the “formal city”.

The categories of analysis allowed to identify three main problems mobilizing the conflicts: “environmental”, “infrastructure and amenities”, and “public and private urban space”, with different levels of preponderance in each of the analyzed municipalities and communes. The environmental problems are related to the basins, hydric sub-basins, and water streams both through underground pipes and in the open. The water streams that are often out of sight from civil society emerge in an alternative and digital space.