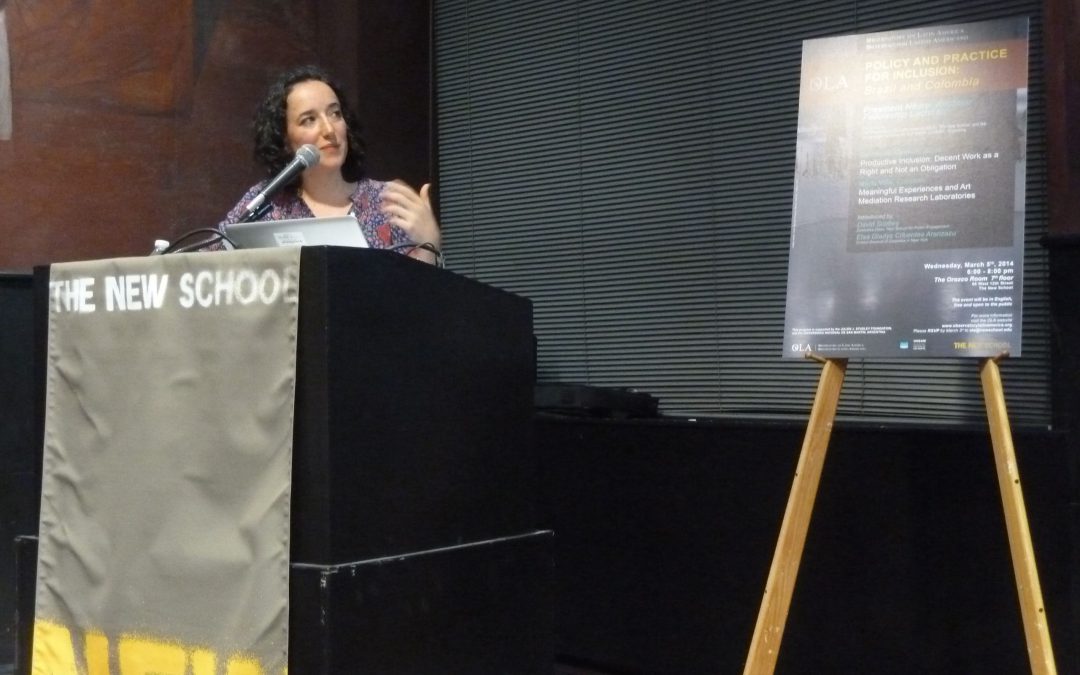 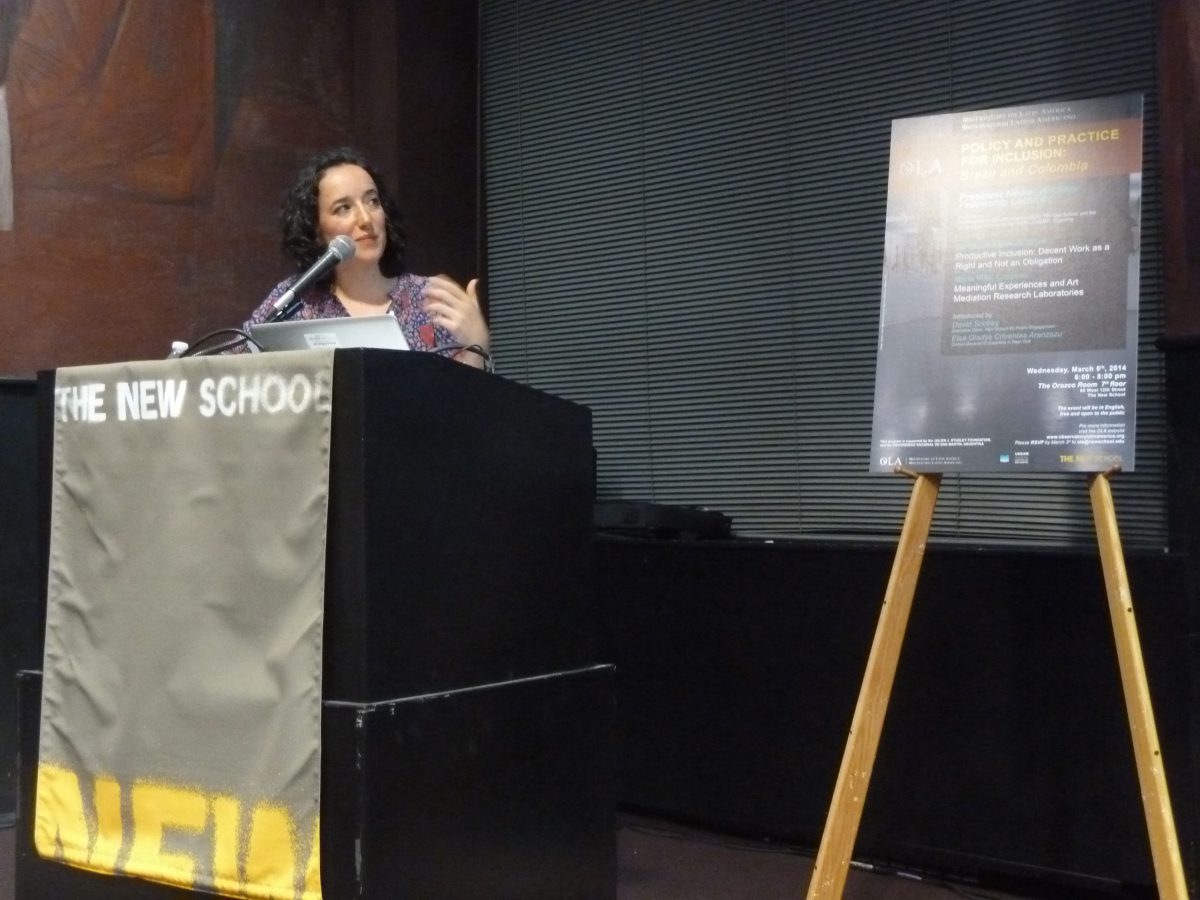 The 2013-2014 President Néstor Kirchner fellow, María Villa, from Colombia, ended his stay in New York with a public lecture at The New School, where she presented her work related to art mediation. The lecture took place after two weeks in which she held meetings and seminars with professors, visited museums and art institutions, and had exchanges that enriched her project.

Entitled “Meaningful Experiences and Art Mediation Research Laboratories”, the research carried out by María, a philosopher and art editor, is based on activities she carried out in Colombia. Realizing that people may times feel alienated at museums and that they are not able to understand or find a relation to contemporary pieces of art, she proposed activities that helped the audience relate to the works from a different, more personal perspective. Her findings during these experiments helped her learn more about the audiences feelings and thoughts, and to engage them more with art.

From February 24th to March 9th, María was received by the academic community at The New School, where she was able to share his experience, hold debates about her work and receive contributions and suggestions to improve it. 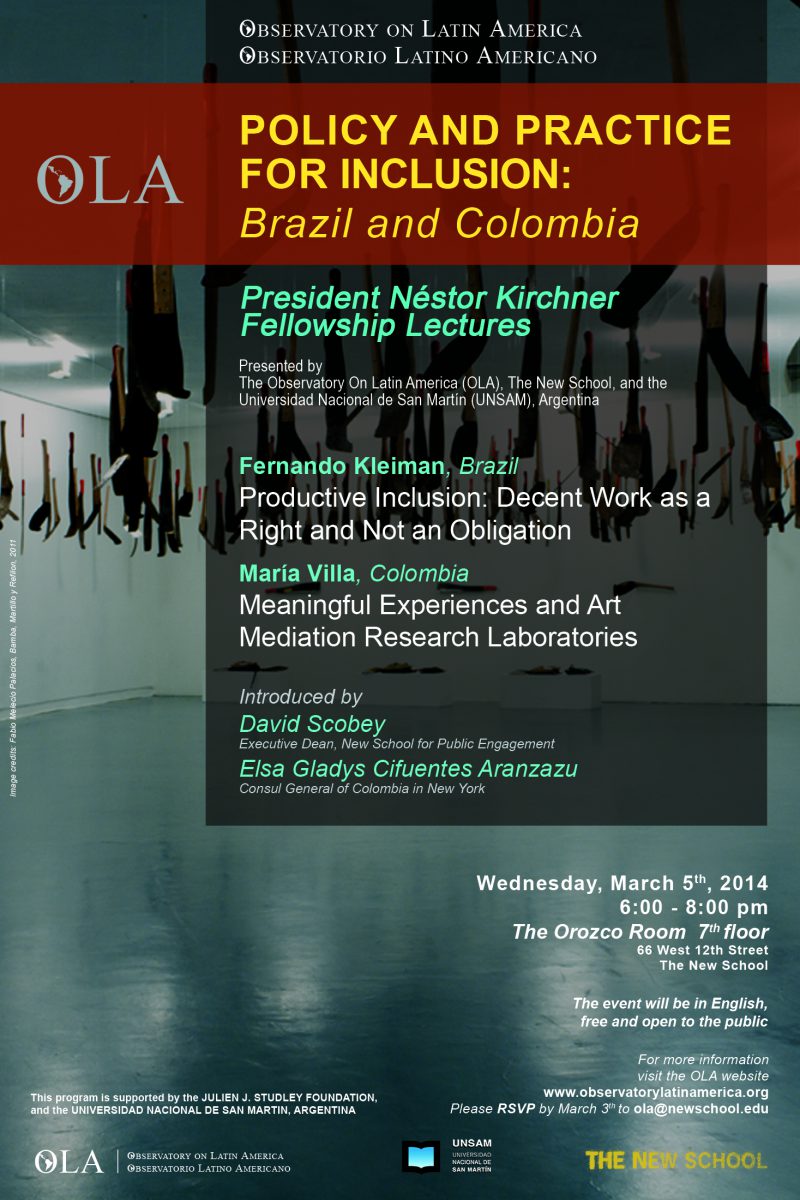 María presented her work “Meaningful experiences in Art Mediation,” speaking after the presentation of the other 2013-2014 President Néstor Kirchner fellow Fernando Kleiman, from Brazil. The conference entitled “Policy and Practice for Inclusion: Brazil and Colombia,” held on March 5th, 2014, gathered a large audience that included graduate students, professors and a general public.

Margarita Gutman, Director of the President Néstor Kirchner Fellowship, introduced the Executive Dean of the The New School for Public Engagement David Scobey, who highlighted the importance of the program within the university and for South America.

The Brazilian Consul in New York, Ana Cabral, presented Fernando’s work, praising his contribution for the development and labor policies related to inclusion her country is carrying out. Fernando presented his work on productive inclusion, based on his experience working at the Brazilian government.

María was introduced by the Colombian Consul in New York, Elsa Gladys Cifuentes Aranzazu, who highlighted the importance the experiences Colombians have abroad for their country. During her presentation, María talked about the projects she carried out with the aim of overcoming the existing gap between art and spectators. She reflected on the ethics of engaging people with art, and presented examples of activities she did in Bogota.

+ Read about Maria Villa’s experience in her own words