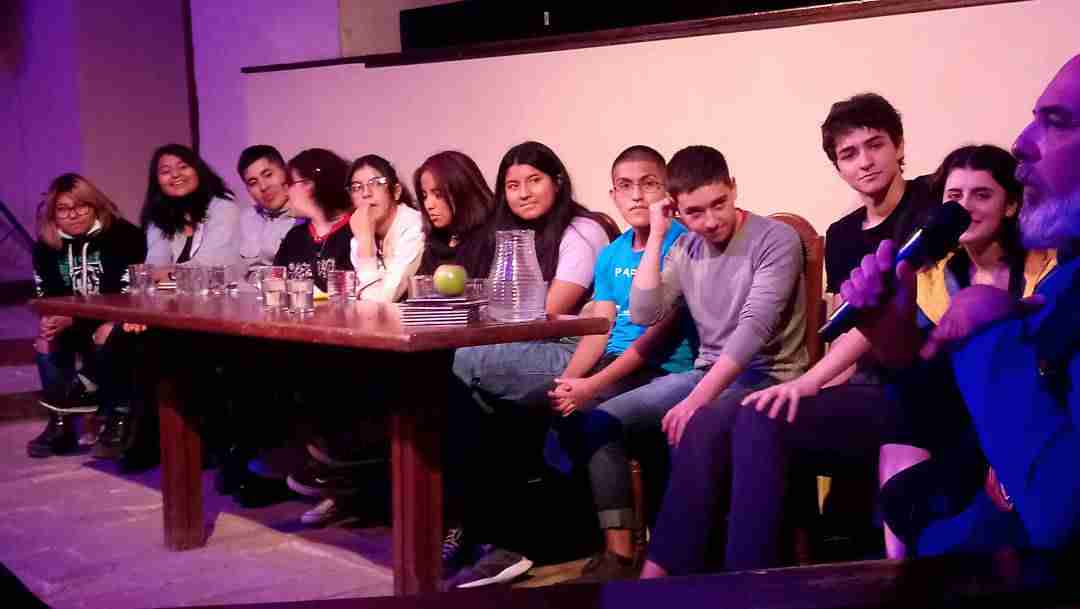 On March 25-26, 2022, the 2084: Imagined Futures from the South program landed on earth. The landing site was in Buenos Aires, when a dozen high school students, half from Tilcara, a small town in the Andes and half from greater Buenos Aires, joined together to share their experiences in going to 2084 and returning to tell their families and friends what they had seen. These imaginary voyages were diverse in what they saw and felt, and most importantly, in what were their hopes for the future.

Organized by the Argentine Ministry of Culture, within the broader 2084 program organized by The New School’s Observatory on Latin America, this trip offered an opportunity for these diverse students, some from indigenous families, to write about their imaginary voyages to the future as well as to tell a live public audience at the Manzana de las Luces Museum in Buenos Aires about what they learned. Their stories varied from a world without sexual violence, to imagining that monogamous marriages had evolved into polygamous relationships, to a world without water, among others.

The students had been selected to participate in this project by their high schools, by local cultural institutions (the Terry National Museum and the Manzana de las Luces Historical Complex), and the Argentine Ministry of Culture. Their engagement with the future was a first step towards further exploration and thought. They flew the 830 miles from the northern city of Jujuy to Buenos Aires and visited many museums, met many people, and had the opportunity to share their own personal experiences as teenagers who had imagined what the world would be like in 2084.Such an effort, financed by the Argentine Government, was a major step for the 2084 program to bring its imagined exploration about the future down to earth. Organized by the OLA in 2020 together with other organizations, this program now includes 18 institutions from Argentina, Colombia, and Peru, with universities in Buenos Aires, Cordoba, Bogota, Medellin, and Cali already having organized projects for their students to imagine the world in 2084.

An important component of the program is the online collection of these imagined futures from the South and their location in the Museum of Futures being hosted by The New School.

Download the digital version of the book 2084 Un túnel argentino (in Spanish).

Watch the videos with interviews with the authors:

In this 1st video we ask the young participants how they imagine the future and what is the relationship between museums and the future. We invite you to know their answers!

This second video collects testimonies during the presentation of the book, which was attended by the 12 teenagers and Viviana Usubiaga, national director of Asset Management; Gustavo Blázquez, director of the Manzana de las Luces Historical-Cultural Complex; Juan Muñoz, director of the Terry National Museum; and Margarita Gutman, from the Latin American Observatory of the New School.

In this third video, the participants tell us about their trip and visits experience.

The program deeply thanks all those who were involved from the Ministry of Culture of the Nation, Argentina, in this process for their enthusiasm, effort and joy, in particular we want to highlight the work of our most immediate interlocutors knowing that we stopped mentioning many who have contributed to this beautiful initiative: