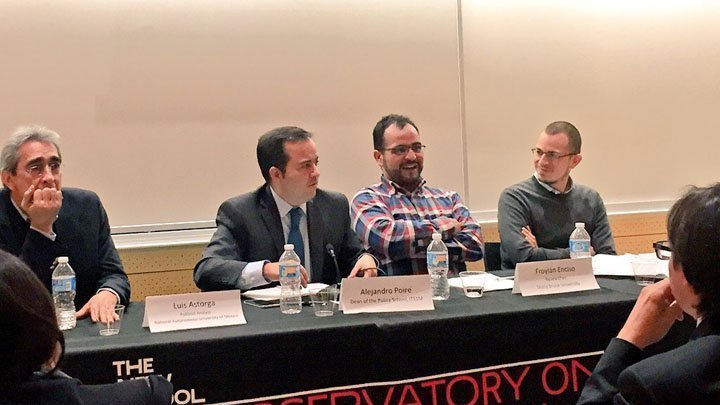 The panel on “Drugs, Violence and Justice” was chaired by Luis Herrán, history PhD Candidate from The New School. The speakers in this panel were: Alejandro Poire, Dean of the Policy School at Instituto Tecnológico y de Estudios Superiores de Monterrey and Former Secretary of Interior (2011-2012); Froylán Enciso, Researcher and journalist and PhD candidate in history from Stony Brook University; Luis Astorga, UNAM Researcher with a PhD in Sociology of Development and an expert in social history of Mexican drug traffic.

This panel featured a range of perspectives on key challenges facing Mexican society in the spheres of security and justice, particularly regarding the current debates about the legalization of marijuana, its possible benefits as well as the obstacles that other structural and conjuncture factors pose to it as a catalyst of broader positive transformations in the state’s approach to security and criminal violence. The panelists agreed on the need to broaden the perspectives on legalization, and to promote public debate on the potential achievements and limits of legalization. They discussed various arguments in this regard, from the potential economic and fiscal benefits of legalization, legalization as a public health debate and the historical links between drug use/trade and violence, to various analytical perspectives on the role of the state vis-à-vis transnational organized crime. The panelists gave a realistic and austere picture of various complex aspects of the debates over legalization and yet stressed its importance to push forward an overhauling of the justice system, a radical change in social norms and practices around consumption, and the overall reformulation of the relation between state and society. 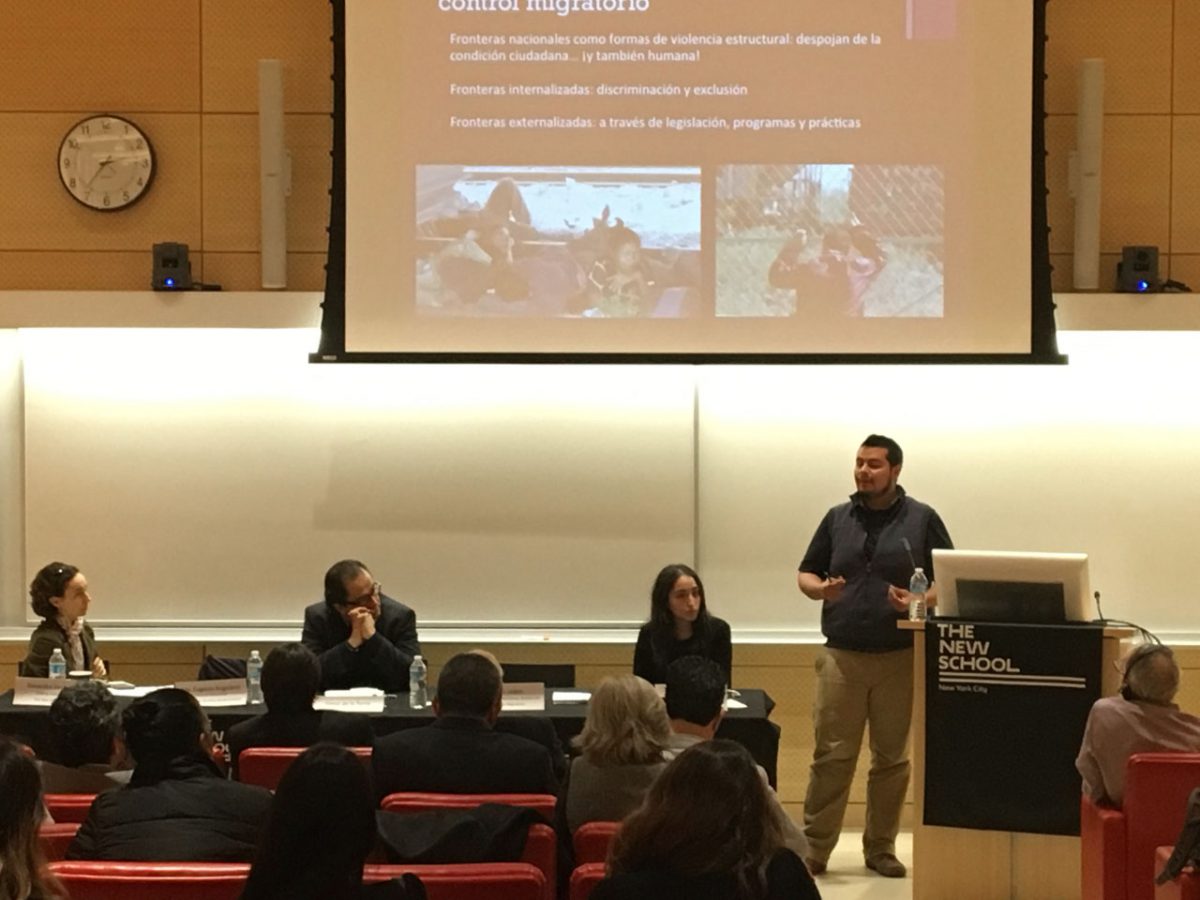 This panel presented and explored different migration flows that occur in, to and from Mexico: emigration, return migration, transit migration, and immigration. Emigration, the first type of migration flow, refers to the increasing number of Mexicans leaving the country mainly to come to the U.S. Return migration refers to all Mexicans (including those U.S. born) who are going back to Mexico. During the presentations, the panelists agreed on the numbers and significance of each flow, and highlighted the fact that the Mexican government has finally shifted from a passive to an active approach on migration management, broadening the agenda from a population management perspective to a development and security one. It was also suggested that even though an inter-sectorial agenda was developed to include other actors such as religious groups, civil society and NGOs, policies do not have a human rights’ abuse focus, so marginalization and exclusion prevail across all three types of flows: emigrants, returning migrants and transit migrants.

The panel “Inclusive Urban Development Policy” was chaired by David López, PhD student in Public and Urban Policy at The New School, and received comments by Margarita Gutman, Program Director of the Observatory on Latin America, and Associate Professor from The New School. The speakers in this panel were: Alejandro Nieto, former Undersecretary of Urban Development and Housing at the Ministry of Agrarian, Territorial and Urban Development (SEDATU); Alfonso Iracheta Cenecorta, Professor of Urban Affairs and Regional Planning at Colegio Mexiquense; and Arturo Ortíz, Director of Taller Territorial de México. 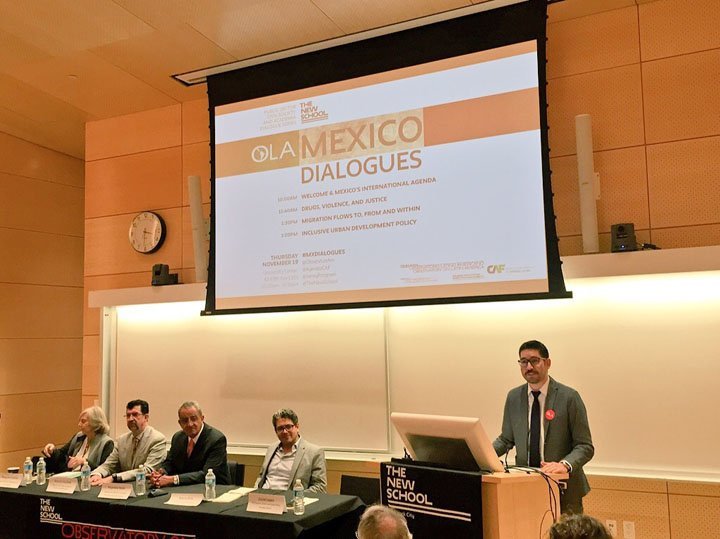 This last panel included Mexican experts on urban development policy, coming from academia, civil society, and public service. Panelists presented accurate and critical depictions of the trends driving the current social landscapes of inequality in Mexican cities. Furthermore, they presented strategies and actions aiming to ameliorate inequality through inclusive urban policy. Among the causes, panelists mentioned Mexican government’s lack of institutional capacity to regulate the performance of private developers. In addition, they discussed the complex social and cultural scenarios of dispersion and segregation in Mexican cities. However, panel members also presented potential solutions to reduce income and spatial inequalities within Mexican cities: 1) Rethinking national urban policy to shift it from sectorial policies to territorial policies; 2) reforming the institutional arrangements of Mexican cities governance to better suit the new metropolitan reality; and 3) rethinking public space as a strategy to foster the practice of citizenship. All of these strategies were discussed between the panelists and the audience, in a lively open dialogue.

With close to 100 attendees along the day, and a closing reception amidst The New School’s Orozco murals, Mexico Dialogues had high-level presentations, which will be part of a forthcoming online and printed booklet containing the highlights of the event.