On 12 August, President Nestor Kirchner Fellowship participated as co-organizer of the 4th Conference of the Asociación Argentina de Estudios de Administración Pública (AAEAP) entitled “Open Government and New Trends in Public Management”, which was held in Germán Abdala Auditorium of the Cabinet of Ministers Headquarters, situated at Av. Julio A. Roca 782, Buenos Aires City, from 9.30 to 13.30 pm. 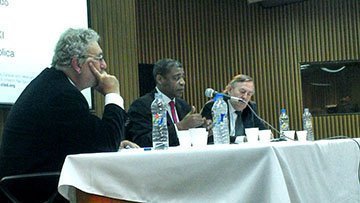 The event counted with the presence of renowned exhibitors: Esther Kaufman, a specialist in New Technologies and Open Government, Diego Pando, Director of the Master of Public Administration at UMET, Dr. Gregorio Montero, Secretary General of CLAD, and Bianor Scelza Cavalcanti, Director of International Affairs of the Getulio Vargas Foundation in Brazil, the last two members of the Evaluation Committee of the Fellowship PNK.

The activity was attended by a large number of public officials, academics and professionals, specialized in administration and management of public policies.