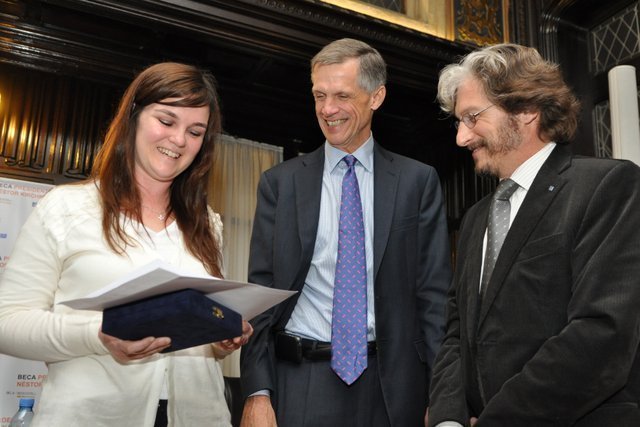 The 2012-2013 edition of the President Néstor Kirchner Fellowship is underway. Cecilia Minaverry from Córdoba, Argentina is the first of three 2012-2013 PNK Fellowship winners who is in New York from November 5th to 16th, 2012 to complete a two week academic exchange, hosted by the Observatory on Latin America. While she is here, she is meeting with academics and experts to expand on her current research, The failure of the “ICSID + BITs” formula during the 2001 crisis in Argentina.

Cecilia Minaverry is currently working as a lawyer on the permanent staff of the Federal Public Revenue Administration, Internal Revenue Service and Social Security Resources, Regional Office in Córdoba and is a doctoral candidate of Law and Social Sciences at the National University of Córdoba. She holds a Masters Degree in International Studies from the University of the Basque Country, with a final thesis in international taxation (2009). She is a member of the research group,Territorial Sociodemography Displacement, based at the Center for Research and Studies on Culture and Society at the National University of Córdoba and is the author of several journal articles.

Ms. Minaverry will be giving a Public Lecture at The New School on her research and her ongoing work as a President Néstor Kirchner Fellow. The event will be in English and is open to the public.

The PNK Fellowship is awarded to young Latin Americans who have demonstrated a commitment to public service. Through the Fellowship, the Observatory on Latin America focuses on supporting the training of South America’s future leaders who are working in political, social and academic fields.

+ Read the media coverage of the public announcement