This program is the site of multidisciplinary, transnational, and networked research and advocacy in the field of design and social development, with a particular emphasis on urban policy.

The first phase of the Design and Development Program, “Urban Anticipations, Making Cities” took place between 2011 and 2015 in collaboration with university research teams from: Chulalongkorn University in Bangkok, University of Buenos Aires, and The New School in New York City. The group was interested in identifying the footprints of the future in innovative forms of practice taking place in these three cities at the neighborhood or city level. Together, they worked building a joint understanding of the relationships between design, social science, and history.

The second phase of the Design and Development Program begun in 2016 with two projects related to the implementation of global commitments in the region, in particular, the United Nations Sustainable Development Goals and the New Urban Agenda. Habitat in Debt is a publication that reviews the progress of the urban agenda between 1996 and 2016. The project about the SDG and NUA in Buenos Aires is a coproduction exercise about mostly centered in the localization of the Sustainable Development Goals at the city-level.

News & Announcements of Design and Development 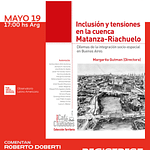