LATIN AMERICA ON THE MOVE

Events and public debates in New York in which Latin American leaders offer their views about the processes of social change in their countries and the region.

Each year, OLA brings together high-level political, social, and intellectual leaders from different sectors to share and discuss their views about the changes underway in the region, and the challenges in striving for social justice and economic growth.

News & Announcements of Latin America on the Move 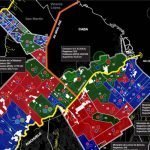 Research presentation · Sociotechnical Explorer: Visual Tools for the Study of Territorial Demands that Emerge in the Digital Space (Metropolitan Region of Buenos Aires 2000-2015)