Space of the Grandmothers

The Civil Association of Grandmothers of Plaza de Mayo is a non-governmental organization which brings together the mothers of these women who were abducted while they were pregnant.

The OLA along with The New School has been fortunate to take part in and honor the work of the Association of the Abuelas de Plaza de Mayo. Through the University the Grandmothers have been awarded honorary degrees in light of their important struggle. The OLA has arranged for meetings between the leaders of the Association and students, so that the history and stories of the Grandmothers will be passed on to new generations and further disseminated throughout the world. The OLA looks forward to developing this relationship with the Grandmothers for future events focusing on their work in particular and human rights challenges in general throughout Latin America.

On March 24, 1976, the Argentine Armed Forces usurped the constitutional government in Argentina through a military coup. The military regime, calling itself the “National Reorganization Process,” conducted a policy of terror throughout the country. “Forced disappearance” was the predominant method to exercise political repression. Thirty thousand people were affected, of all ages and backgrounds, deprived of their liberty and subject to confinement and torture at the hands of the military regime. Among the thousands of women who were abducted, hundreds of them were pregnant and gave birth in captivity. Most of those women were killed and their babies were kidnapped by the military regime.

The children, unlawfully appropriated as “spoils of war”, were registered by members of the forces of repression, left, sold or abandoned in institutions as “NN” (“unidentified”). Thus, they became part of the growing list of “disappeared,” as they were deprived of their legitimate lives with their biological families. Their human rights and freedoms abolished.

The Civil Association of Grandmothers of Plaza de Mayo is a non-governmental organization which brings together the mothers of these women who were abducted while they were pregnant. Their goal is to identify and locate their grandchildren who are still missing, living under a false identity, name and with false documentation.

To ensure the validity of blood tests, the Grandmothers created a genetic database by National Law No. 23,511, containing the genetic maps of all the families who have reported missing children. This is a unique approach and the only one of it’s kind globally.

Thanks to their hard and tireless work, on April 13, 2011, the Grandmothers recovered the grandson numbered 103. They continue the search. In total there were about 500 grandchildren who were disappeared under the dictatorship.

News & Announcements of Space of the Grandmothers 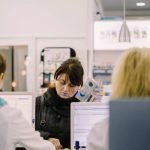