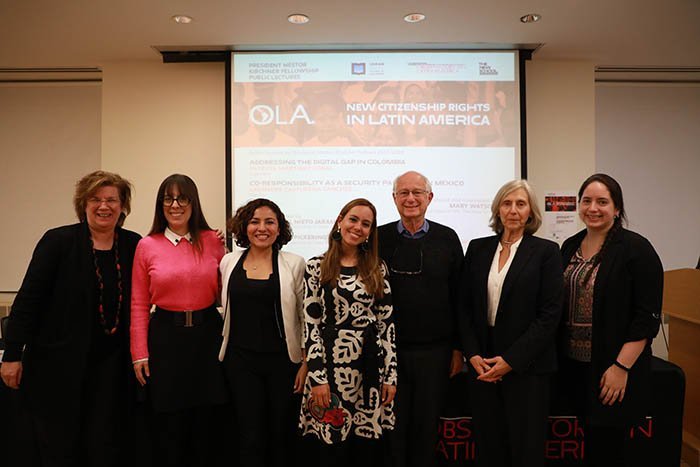 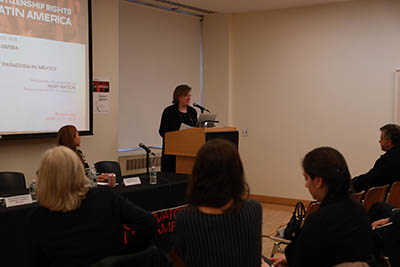 The Spring Public Lecture of the President Nestor Kirchner (PNK) Fellowship 2017-2018 took place on March 8, 2018 in the Klein Conference Room at The New School in New York. The event was postponed to March 8th due to severe weather conditions. With this lecture, the OLA celebrated the second session of the 7th annual edition of the PNK Fellowship, a joint initiative of the Universidad Nacional de San Martin (UNSAM) in Argentina and The New School, in New York.

Mary Watson, Executive Dean welcomed the audience and served as a moderator. She was joined by Margarita Gutman, Director of the OLA and Paulina Strassburger Lona, a special representative of the Mexican Consulate in New York.

Mary Watson congratulated the OLA for its 7th edition of the President Nestor Kirchner Fellowship. She spoke about the rigor of the three-step selection process in New York and Argentina. She noted that four applicants were awarded for the 7th edition, each from a different country: María Sofía Bernat, from Argentina; Paulo Alas Rossi, from Brazil; Patricia Martínez Coral, from Colombia; and Casandra Castorena Sánchez, from Mexico. She welcomed the community and congratulated the spring fellows.

Margarita Gutman, Director of the PNK Fellowship and the Observatory on Latin America followed Mary Watson speaking the OLA’s programs and objectives.

Professor Gutman explained that this year the Fellowship received 107 applications from 17 countries of Latin America. She spoke about the process of evaluation and collaboration with UNSAM. She also stressed the uniqueness of the fellowship and highlighted the intersection of the academy and social commitment. 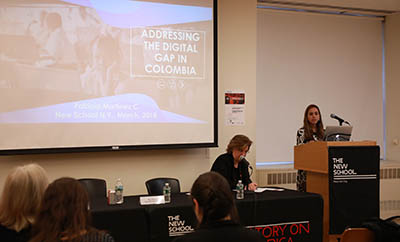 To introduce Patricia Martinez, from Colombia, Professor Gutman highlighted Patricia’s PhD in Political Studies as well as an MA in Public Policy from the Universidad Externado de Colombia. She also highlighted her current position and work experience at the Colombian Ministry of Technology and Information.

Patricia Martinez Coral opened her presentation with a discussion about the importance of underlining digital exclusion in rural communities in Colombia. She explained how population density affects inequalities in Colombia referring specifically to rural population in the year 2015. Furthermore, she stressed how geography poses substantial challenges to infrastructure expansion in Colombia due to technical complexities and high transportation costs.

Patricia explained that she used “historical institutionalism” as her theoretical framework for analyzing the path dependency in the design, implementation, and effects of internet access gaps in rural Colombian communities between 1995 and 2015. Patricia explained that there is “a lock in point that makes it difficult to reverse this phenomenon of exclusion”. She argued that as a result of the Universal Access policy, in terms of coverage, quality, and affordability, the digital divide in rural towns has worsened.

She concluded her presentation by emphasizing three points and proposing next steps. First, that faith in the market, beyond economic rationality, leads to ineffective and unsustainable interventions. Second, that technology is not neutral in its social or political effects. Third, that technological diffusion depends on institutional design. In terms of next steps, Martinez argued that a better understanding of rurality is needed to improve public policies in Colombia. Finally, she proposed that new models based on social interactions should be explored to develop alternatives of internet access in rural towns. 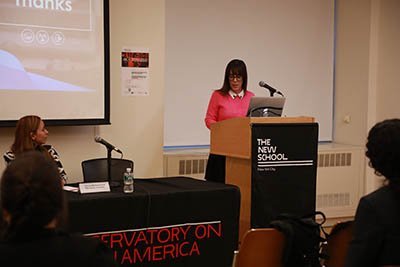 Following this part of the public lecture, Paulina Strassburger Lona, a special representative of the Mexican Consulate in New York from Mexico introduced Casandra Castorena Sánchez. Strassburger Lona praised the fellowship’s encouragement and exchange of ideas and talent. She highlighted Casandra’s educational background, work experience, and commitment to her field. 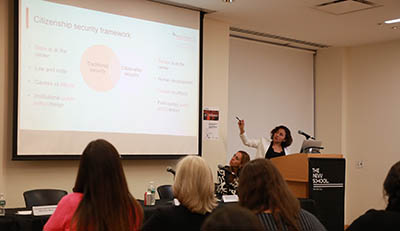 Casandra Castorena Sánchez opened her presentation with a discussion of the need to study and “craft peace” within the general studies of violence and insecurity. Utilizing Johan Galtung’s model as a base, she emphasized the duality between physical and structural violence. She explained how structural violence is often neglected in policy because the results tend to be long term, rather than short term. She argued that the prevalent security policy paradigm requires active citizen participation and a human rights approach. The design of bottom-up interventions considers the citizen as an agent for change and promotes a co-responsibility scheme.

She explained the complementary relationship between the traditional security framework and the citizenship security framework in order to demonstrate the need to include both. She concluded her presentation by emphasizing the importance of adressing the causes of violence at a local level, considering indicators sensible to human development, and including citizen insight to design and implement security solutions.

Following the presentations, Executive Dean Mary Watson moderated very interesting discussions and took the lead by asking Casandra about her ideas for how to include citizen voices in the participatory model she presented. Dean Watson then posed questions to both fellows about how generational change affects both problems in their home countries as well as their impressions from their experience in New York. Comments from the audience included questions on how to push agendas within governmental organizations and what types of policies already incorporate citizenship security paradigms.

+ What is it like to be a President Néstor Kirchner Fellow?, by Patricia Martinez Coral

+ What is it like to be a President Néstor Kirchner Fellow?, by Casandra Castorena Sánchez