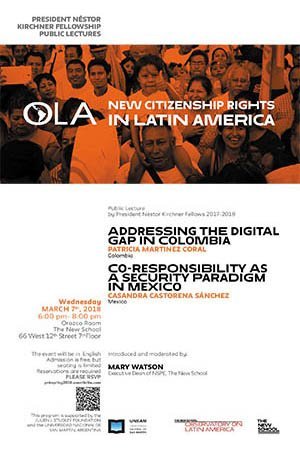 Introduced and moderated by:

Fellows will be presented by:

The New School Observatory on Latin America (OLA) and Universidad Nacional de San Martín (UNSAM) are pleased to present, in this 7th consecutive year of the President Néstor Kirchner Fellowship, the 2017-2018 Fellows: Patricia Martinez Coral and Casandra Castorena Sánchez, who were awarded this Fellowship after demonstrating academic excellence and a commitment to public service.

Addressing the Digital Gap in Colombia, by Patricia Martinez Coral

Ms. Martinez research focuses on the digital gap in Colombia’s rural communities. She analyzes how institutional design and technological bias add to the conditions of exclusion in Colombia.

Ms. Martinez holds a PhD in Political Studies as well as an MA in Public Policy from Universidad Externado de Colombia.

Co-Responsibility as a Security Paradigm in Mexico, by Casandra Castorena Sánchez

Ms. Castorena research in citizen security focuses on the different types of violence prevalent in Latin America and the Caribbean. She argues for a new co-responsibility paradigm in the design of public policies that address the security needs of citizens.

Ms. Castorena holds a BA in International Relations from the National Autonomous University of Mexico (UNAM) and is a Master’s candidate at UNAM.

The Lecture will be in English.
Admission is free, but seating is limited.
Reservations are required.
Please RSVP by March 6th at pnkspring2018.eventbrite.com