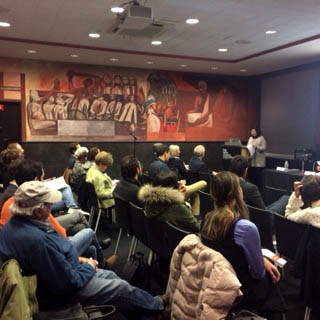 The Fall Public Lecture of the President Nestor Kirchner (PNK) Fellowship 2017-2018 took place on November 15, 2017 at the famous Orozco Room at The New School in New York. With this lecture, the OLA celebrated the start of the 7th edition of the PNK Fellowship, a joint initiative of the Universidad Nacional de San Martin (UNSAM) in Argentina and The New School, in New York.

Our Fall 2017 Fellows, Paulo Alas Rossi from Brazil and María Sofía Bernat from Argentina, presented their respective works at an event entitled: “Peripheralization of the Poor: Symbolic Practices and Policy Analysis”

David E. Van Zandt, President of the New School welcomed the audience and Mary Watson, Executive Dean served as the moderator. The introduction was done by Margarita Gutman, director of the Observatory on Latin America. She was joined by Minister Lúcia Maierá, Brazilian Deputy Consul General. 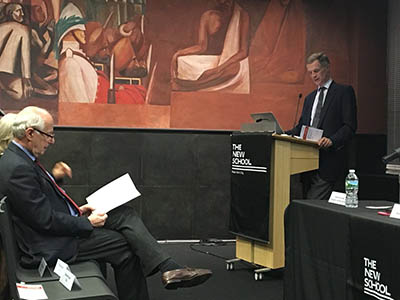 President Van Zandt congratulated the OLA for its 7th edition of the President Nestor Kirchner Fellowship. He spoke to his involvement in the selection process in New York and Argentina. He welcomed the community and gave a special introduction for Minister Lúcia Maierá, Brazilian Deputy Consul General who joined us for the second time.

Professor Gutman shared with the audience the process of selecting the four fellows awarded for the period of 2017-2018. Professor Gutman explained that this year the Fellowship received 107 applications from 17 countries of Latin America, this being the third year the program included fellows from all Latin America and the Caribbean. Four applicants were awarded for the 7th edition, each from a different country: María Sofía Bernat, from Argentina; Paulo Alas Rossi, from Brazil; Patricia Eugenia Martínez Coral, from Colombia; and Daniela Casandra Castorena Sánchez, from Mexico. 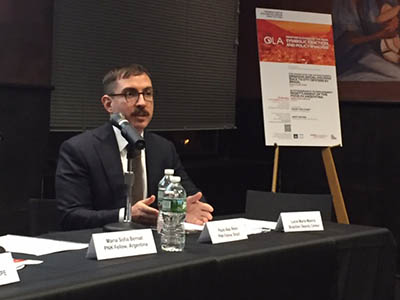 Professor Gutman noted that from 2011 on, the Fellowship has received more than 760 applications from all Latin America. She highlighted that there have been twenty-four fellows: seven recipients from Argentina, six from Brazil, three from Mexico, two from Peru, one from Bolivia, two from Colombia, one from Ecuador, one from Cuba, and one from Uruguay.

To introduce Paulo Alas Rossi, from Brazil, Minister Lúcia Maierá, Brazilian Deputy Consul General highlighted Paulo’s more than nine years of experience in affordable social housing and policy making. She stressed that as a public servant in the Ministry of Cities, he has devoted himself to the improvement and monitoring of the ‘My House, My Life Program’ (PMCMV), the major social housing program in progress in Latin America.

Following this introduction, Paulo Alas Rossi opened his presentation with a discussion of the objectives of the My House My Life Program and the phenomenon of “peripheralization of the poor” as a policy problem. Paulo stressed the infrastructural as well as the social costs of peripheralization. He stated that “despite the success of the program, inadequacy of location became a political issue.” Paulo further argues that it is “the formal market that is creating this peripheralization.” 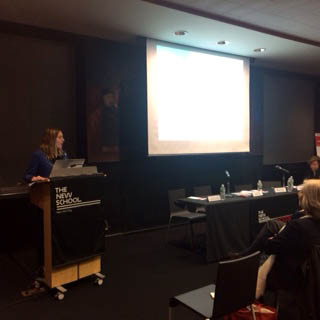 During his presentation, he explained that the business modality of the program gets the highest share of the subsidies. In this modality, the developers guide the process, but the local government approves it. They have a set of instruments to manage land and the federal government sees that the municipalities are failing. He asked, how do we ensure better located housing? The governance dimension of the policy formulation is fundamental, even at the federal level. Recent initiatives have focused on the technical dimension of the problem. Rossi adds to this effort, stressing the social dimension of the problem, exploring actors’ inter-dependencies, interests and perspectives. Rossi concluded his presentation by emphasizing that it is faster and more profitable to produce houses than cities, but that the political costs of exercising land management instruments should not be underestimated.

To introduce María Sofía Bernat, from Argentina, Professor Gutman highlighted Sofía’s educational background and commitment to her field. Sofia is PHD candidate in Journalism and Social Communication at the National University of La Plata in Argentina. She has recently submitted her dissertation to the doctoral commission. She worked at the civil organization TECHO, coordinating the community development area. She also worked at HABITAR, an organization within the national senate of Argentina that advocates for better housing and urban conditions in Argentina. 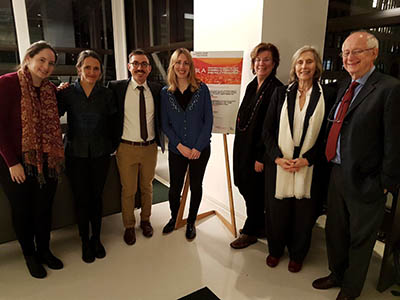 Sofía quoted Eduardo Galeano and explained that she sees her research as a sentipensante process, uniting sentiment and thought. She explained how naming is a form of dominance which allows subjects to appropriate and attribute different levels of significance. Sofía highlighted how the two neighborhoods within Ringuelet show radically different ways of organization and participation. Once the relocation had finished, the community assemblies ceased. Bernat concluded her presentation by showing how the different modes of participation in the relocation process created different ways of inhabiting the territory and different ways of demanding and expressing their right to the city.

Following the presentations, Executive Dean Mary Watson moderated very interesting discussions and took the lead by asking each Fellow to comment on each other’s work. Comments from the audience included questions on the effect of climate change on housing, transnational spaces for discussion on housing policies, and the relevance of policy-academic dialogues.

+ What is it like to be a President Néstor Kirchner Fellow?, by Sofia Bernat

+ What is it like to be a President Néstor Kirchner Fellow?, by Paulo Alas