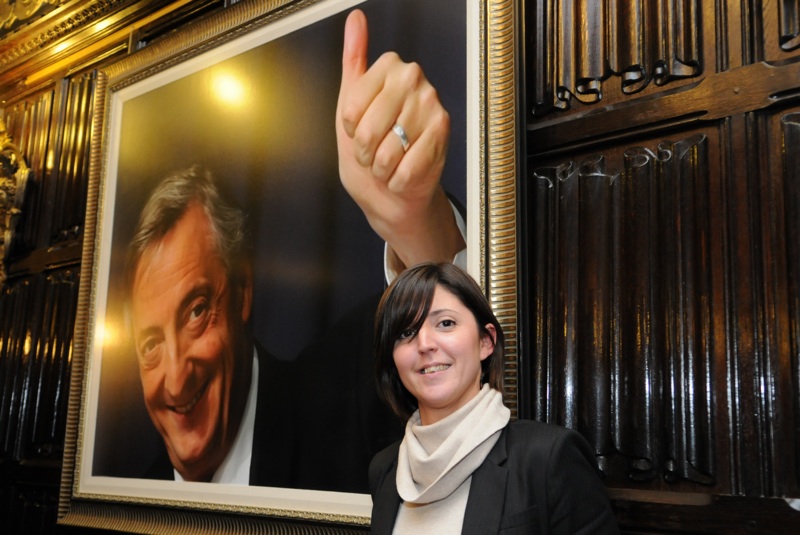 Lucila Rosso is the first President Néstor Kirchner Fellow. She was awarded this honor for demonstrating academic excellence and a commitment to public service.

Ms. Rosso presented her work on Argentina and Brazil’s debt prepayment to the IMF in a lecture open to the public, hosted at The New School. She was introduced by David E. Van Zandt, President of The New School, and Ambassador Jorge Argüello, Permanent Representative of Argentina to the United Nations.

Rosso’s presentation focused on the work presented in her paper, and incorporated aspects of her educational experience in New York. Ms. Rosso argued that the economic interventions in each country served political ends, and their distinct relationships with the IMF were based on these political narratives. Her in depth study revealed the linkage between economics and politics in the history of Brazil and Argentina’s respective histories of development.

The determinants of debt relief with the IMF

At the beginning of the XXI century Argentina and Brazil cancelled their debts to the IMF in advance, after a decade marked by the Washington Consensus and close relations with the United States and the fund. These measures represented a striking move in the foreign policy of both states. This exploratory study seeks to identify what were the determinants of these matching steps, with the final goal of filling a gap in the existing literature in regards to the causes of the cancellation of agreements between states and the IMF. Both systemic and domestic changes are relevant in seldom case studies.

The undermined prestige of the IMF at the beginning of the twenty-first century, its policy of restraint and funding reduction together with its intention to reduce their credit exposure by encouraging the payment of its largest debtors -such as Argentina and Brazil- seem to be relevant causes of the decision under study. Another fact that should be considered is the new political direction of Argentina’s and Brazil’s governments at the time since both were in favor of regaining the lost autonomy and independence in economic, monetary and tax policies product of the program imposed to them by the IMF in the 90’s.

In the Argentine case, it can be seen that the measure itself has little impact on the domestic economy and is in both the interest of the state and the fund. Therefore I risk to conclude –at least on a first analysis- that the main factors which influence the Argentine decision are most definitively political, such being: the IMF backing away from its intervention in the economy and domestic politics and the interest of the government to increase the country’s autonomy in the implementation of public policies.

+ Download the program of this lecture: cover and inside