“Buenos Aires: The Power of Anticipation” selected by the VIII Ibero-American Biennial of Architecture & Urbanism 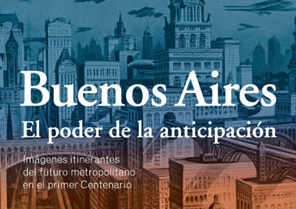 Margarita Gutman’s work was selected to compete in the category of Publications. After the International Jury met in Madrid in April 2012, the publication was considered as a finalist in the category Books.

The Department of Architecture, Housing and Land Development Ministry of Spain announced that Buenos Aires: The Power of Anticipation. Itinerant Images of the Metropolitan Future at the Time of the Centennial has been elected as a finalist in the category of Books to compete in the the VIII Ibero-American Biennial of Architecture & Urbanism. The book had  previously been selected by the National Delegate of Argentina to compete in the category of Publications.

The Ibero-American Biennial of Architecture and Urbanism is an initiative of the Government of Spain, established after previous editions as one of the fundamental references to determine the current status and future of architecture and urbanism in the Latin American community. More information can be found on their website: www.bienaliberoamericana.org.

Buenos Aires: The Power of Anticipation. Itinerant Images of the Metropolitan Future at the Time of the Centennial is the first book that comprehensively examines the imagination of the urban future in Buenos Aires. At the time of the Centennial, its people imagined and consumed a large and exciting series of images, desires, plans and expectations for the future of the city.

Former residents and newcomers, different social sectors, professionals and workers, artists, journalists and readers, all shared a time of great change and aspirations. They were convinced that a future of endless progress was waiting for them. This book tells the story and shows the texture and energy of the power of anticipation in those years. Today as before, the past enriches our present and provokes us to envision and build the future.

The book is in bookstores in Buenos Aires and New York at the following locations:

Read book reviews and interviews with the author