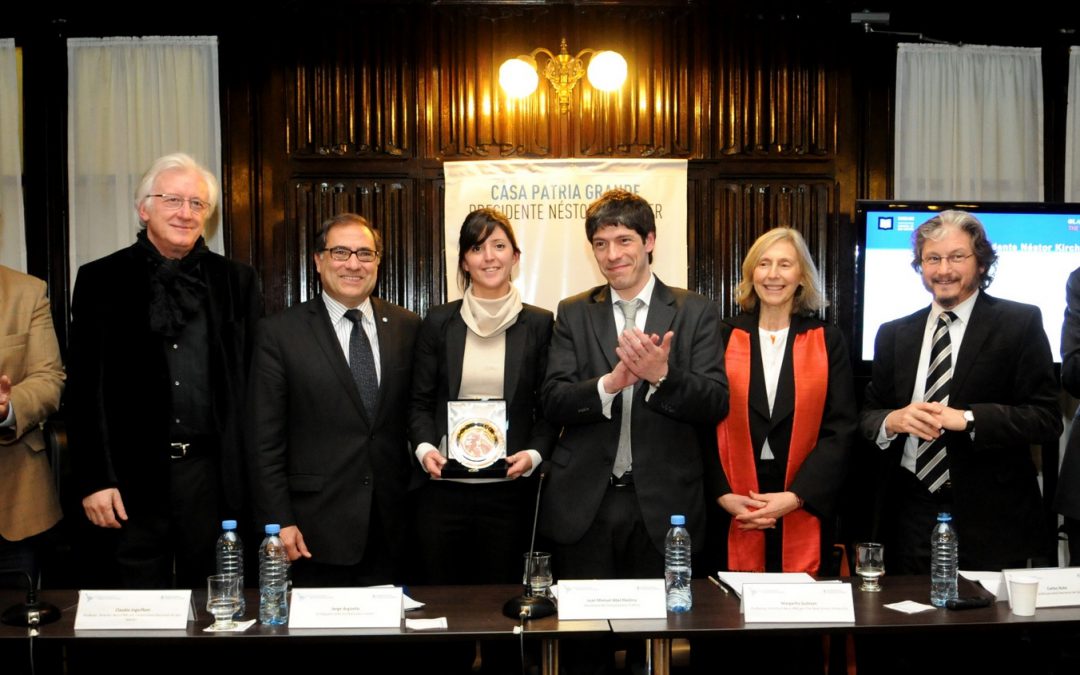 Universidad Nacional de San Martín and the Observatory on Latin America (OLA) at The New School University in New York are proud to announce the three Fellows and six honorable mentions selected by an international jury consisting of 56 representatives from academia and public service, from nine South American countries and the United States. This selection was made among the 103 candidates from 11 South American countries who applied for the Fellowship.

The jury emphasized the academic excellence, commitment to public service and relevance of the issues raised by candidates. It also highlighted the broad spectrum of professional fields of the candidates and the originality of their approach on issues such as international economic management, regional integration UNASUR, human rights, social movements, media, democracy, education, local development, health, activism, fight against drugs, violence, NGOs and others.

The selection of the Fellows and honorable mentions is the result of a rigorous evaluation process carried out in three stages. This seven-week process ensured that all the applications were evaluated by an extensive and diverse jury comprised of renowned from the academic and the public service regional fields.

This Fellowship was launched on April 20, 2011 in Buenos Aires at the Casa Patria Grande President Néstor Carlos Kirchner, and widely disseminated throughout South America. It is inspired by the legacy and achievements of former President Néstor Kirchner during his term as President of Argentina (2003-2007), coupled with his important work as the first Secretary General of UNASUR (2010). It is aimed at the training of young leaders in Argentina and South America, working in the public service and academic fields. The Fellowship consists of an exchange of ideas and experiences between the Fellow and academics, politicians, and civil society agents in the city of New York. It covers a two-week stay, during predetermined dates, and will take place at The New School University, where the Fellow will present his/her work and experience to students, academics, and political and civil society leaders.

The diversity and quality of the candidates who applied for the President Néstor Kirchner Fellowship represented a real challenge for the prestigious jury, who worked with commitment and excellence. It is the aim of the two organizing universities of this regional initiative to contribute in this way to honor the memory of Néstor Kirchner.

Lucila Agustina Rosso, Argentina
She holds a Law degree from Universidad de Buenos Aires and is a Master in International Relations and Negotiations candidate from the Facultad Latinoamericana de Ciencias Sociales (FLACSO), Universidad de San Andrés and Universidad de Barcelona. She worked at the Ministry of Foreign Affairs and International Trade, the Security Ministry and the Ministry of Justice and Human Rights.
Essay: The Determinants in the Debt Relief with the IMF. The Debt Prepayment of Argentina and Brazil.

Mauricio Santoro Rocha, Brazil
He is a journalist and PhD in Political Science from the Instituto Universitário de Pesquisas do Rio de Janeiro. He worked as a reporter for Globo Network and as an international cooperation officer at the Brazilian Institute of Social Analysis. He also worked at the Ministry of Development, Industry and Foreign Trade and was a member of the Brazilian National Youth Council.
Essay: Democracy and Foreign Policy in Brazil

María Celeste Perosino, Argentina
She is a Phd in Philosophy candidate and a Forensic Anthropologist from the Universidad de Buenos Aires. She holds a Masters in Biomedical Ethics from the Universidad Católica Argentina. Since 2000, she works as a researcher at the Argentine Forensic Anthropology Team.
Essay: Threshold-Practice, ethics and Human Rights in the dead body.

Mercedes Inés Grané, Argentina
She is candidate for a Masters in Social Policies Design and Management from FLACSO and holds a BA in Economics from the Universidad de Buenos Aires. Currently, she works at the Ministry of Labour, Employment and Social Security, coordinating a program for unemployed young people.
Essay: Youth employment policy in Argentina: a comparative study in the management program in two provinces.

Nicolás Darío Valenzuela Levi, Chile
He is an architect and graduate student in the Masters in Urban Development from the Universidad Católica de Chile (UC). Currently, he is the Director of SentidosComunes.cl, a project under the auspices of Fundación Dialoga. He was Secretary General of the UC Students Federation between 2008 and 2009, and founder of the Nueva Acción Universitaria movement.
Essay: Reflections on political culture based on 200,000 young Chileans marching in the Alameda

Gislene Moreira Gomes, Brazil
She is a PhD in Social Sciences candidate from FLACSO-Mexico, holds a Multidisciplinary Master in Culture and Society from the Universidad Federal de Bahía, and a BA in Social Communication from the Universidad Estadual de Bahía. She was the Coordinator of the Community Communication and Youth Mobilization Program at the CIPÓ Comunicación Interactiva NGO and Special Communications Secretary at the Government of Bahía.
Essay: Arepas, tortillas and beijús: Heterogeneity of communicative struggles in Latin America

Camilo Andrés Tamayo, Colombia
He is a PhD Student of Politics and International Studies at The University of Huddersfield, MA in Global Citizenship, Identities and Human Rights from the University of Nottingham, and BA in Social Communication from the Pontificia Universidad Javeriana from Colombia. He is an Associate Expert of United Nations Development Programme?s Latin American Regional Centre.
Essay: Communicative citizenship, another dimension of rights. Case study: Colombia.

Jaris Mujica Pujazon, Peru
He is a PhD candidate in Political Science, Master in Political Science and BA in Anthropology from the Pontificia Universdidad Católica of Peru. He is an Associate Researcher at the Centro de Promoción y Defensa de los Derechos Sexuales y Reproductivos (Center for the Promotion and Defense of Sexual and Reproductive Rights). He was previously member of committee in charge of creating a proposal on criminal policies for the Justice Ministry of Peru.
Essay: Actors and arenas of the micro-corruption systems in the Courthouse at downtown Lima, Peru.