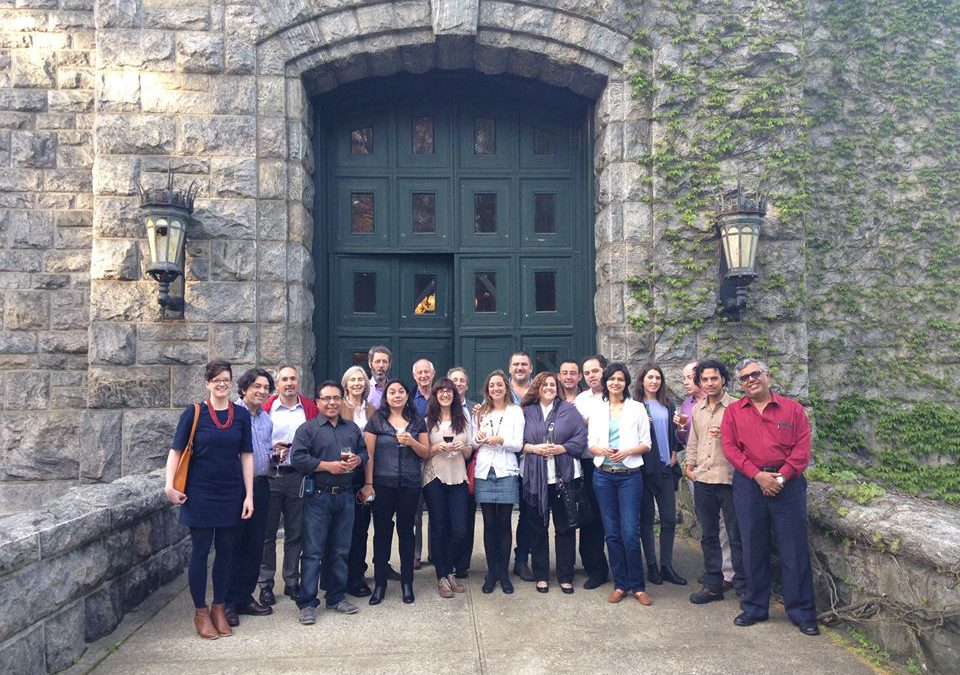 The Observatory on Latin America (OLA) and the Latin American Council of Social Sciences (CLACSO) held a week of conference and seminars aimed to evaluate, acknowledge and celebrate the achievements of the past thirty years of democracy in Latin America.

These events were based on a CLACSO Research Fellowship Competition supported by the Swedish International Development Agency (SIDA) in which eleven CLACSO-OLA fellows from ten countries in Latin America were selected.

The Fellows participated in different events that included a conference at the Pocantico Conference Center in Tarrytown, where they presented and discussed their work with other academics; a public seminar at The New School University, where they also discussed and received comments from professors and graduate students, and a half day conference at the United Nations (UN), sponsored by the Argentinean and Swedish missions to the UN.

Michael Cohen and Margarita Gutman, Directors of the OLA, Pablo Gentili, Executive Secretary of CLACSO, and Thomas Kruse (program director for the global governance portion of the Democratic Practice program of the Rockefeller Brothers Fund), moderated and contributed to the different discussions. During the seminars, the Fellows also interacted with Luis Suarez Salazar (Professor of International Affairs at the International Relations Higher Institute -ISRI- in Cuba, and Alberto Minujin (OLA Senior Fellow at The New School), who along with Monica Hernandez (doctoral student at The New School) discussed the material progress under democracy in the region.

Also participating was Eric Hershberg (Director of the Center for Latin American and Latino Studies and Professor of Government at American University), who besides emphasizing that the change of political elites during the last thirty years of democracy has not had a counterpart when the economic sphere is considered, also stressed the importance of developing future studies where the relationship between inequality and democracy in the region can be explored in more depth.

Jordi Borja (Co-Director of the City Management and Urban Planning Graduate Program at the Universitat Oberta de Catalunya, and president of the Observatory of Economic, Social, and Cultural rights -located in Barcelona) also collaborated and offered insights to the Fellows. Borja emphasized the importance of public policy to reinforce social and economic rights, as well as the importance of the social and cultural capital when studying inequalities in the region. He also encouraged the participants to develop new theoretical approaches that, coming from Latin America, may provide new ways to study and generate solutions to the region’s problems.

In this event also participated David Van Zandt, President of The New School, Jessica Faieta, Director of the Regional Bureau for Latin America and the Caribbean, United Nations Development Program (UNDP), and Pablo Gentili. Three of the Fellows, Pablo Uc, Sofia Donoso, and Ana Laura de Giorgi, had the opportunity to talk about their work and have an open debate with the audience, which included ambassadors and Latin American representatives of various UN missions.

As part of the conclusions of the events, Michael Cohen acknowledged that in the study of the economic and social progress of the region and its relation to democracy, it is crucial to consider the region’s heterogeneity and therefore to consider different forms of democracies rather than focusing solely on one definition or understanding of democracy. He also emphasized the importance of the participation of an educated population in order to strengthen democratic processes in the future.

Pablo Gentili also recognized that democracy has been, and is, necessary for Latin America and that it has been a determinant aspect for the social and economic progress of the region. He also acknowledged the importance of maintaining, extending, and multiplying democracy in spite of the challenges that may come with it.

+ See the complete list of participants and the programs of the events: at The New School and at United Nations