Presentation of the Argentine Ambassador to the UN, Jorge Argüello: “It Takes Two to Tango, the Malvinas/Falkland Islands Dispute” 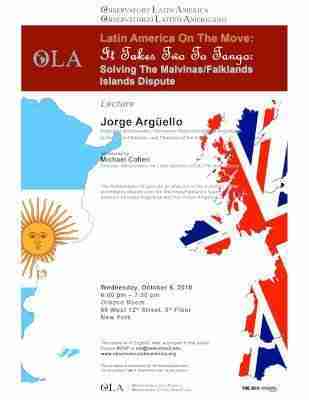 Surrounded by the characters of Mexican artist José Clemente Orozco’s mural, Argentine Ambassador to the United Nations Jorge Argüello presented the history and Argentine perspective on one of the oldest territorial disputes: the Malvinas Islands, known as the Falkland Islands for Great Britain, in a talk titled “It Takes Two to Tango”. The choice of the title quickly became clear as Ambassador Argüello argued that while Argentina has wished to resume talks with the United Kingdom regarding the governance of the Malvinas Islands, the United Kingdom has refused.

A legislator in his home country for over twenty years, Ambassador Argüello was intimately familiar with the dispute over the Malvinas Islands, located in the South Atlantic Ocean, which he described as “400 km away from mainland Argentina and 14,000 km away from the United Kingdom.” As a legislator, he served as the chair of the Foreign Relations Committee and President of the Parliamentary Observatory on the Malvinas. He explained, “The purpose of the observatory on the Malvinas was to open a road of dialogue”.

Open dialogue was the focus and running theme of Mr. Argüello’s talk. He expressed a firm belief that only a peaceful solution is feasible and that a peaceful solution can be possible if both sides worked and showed political will. “The main obstacle”, he stated, “is the political will is on one side”, referring to Argentina’s willingness to talk and Britain’s recalcitrance over the matter.

A dispute of over 177 years

He briefly recounted 177 years of dispute on the sovereignty of the Malvinas. Since 1810 Argentina considered the Islands as part of their territory thus sending six governors from Buenos Aires to administer the islands. Furthermore, “Great Britain”, Mr. Argüello explained, “made no claim to the Islands when in 1827 they recognized independence of Argentina”. Historically, there have been a number of social and economic services provided by the Argentine government to the Islands including scholarships, construction of the airport, postal and telegraph services, and banking systems.

A number of international resolutions passed by the General Assembly of the United Nations have encouraged peaceful solutions to the dispute. United Nations resolution 2065 was adopted in 1965 and acknowledged that there existed a sovereignty dispute between Argentina and the UK and encouraged involved parties to find a peaceful solution “bearing in mind the interests of the population of the Malvinas”. Mr. Argüello drew a distinction between interest and wishes since the United Nations “had taken the view that the population transplanted by the colonial power was not a people with the right to free determination”. In fact, the population of the Malvinas has had British citizenship.

The 1982 conflict in which Argentina invaded the Malvinas was described by Mr. Argüello as “the last resort of a weak Argentine dictatorship which did exactly what the British did a century and a half before when they sent troops to the Malvinas”. Even if the territorial dispute unites Argentines, Mr. Argüello and the national party have decidedly followed the mantra that force cannot be a part of the solution to the conflict.

The British refusal to engage in negotiations was extrapolated by Mr. Argüello as “the existence of clear double standards between those member states who have more power and continue to use this privilege to shield their interest by violating UN resolution”. As the newly elected president of the Group of 77, a group of developing countries plus China whose objective is to promote south-south cooperation, Mr. Argüello questioned the power of the Security Council, which has refused to comply with the General Assembly. The United Kingdom has veto power as one of the five members of the Security Council and thus has prevented progress in diplomacy over the disputed South Atlantic island. “What is the reason that one of these five countries [the United Kingdom] refuses to accept this resolution?” Mr. Argüello pleaded.

To complicate the issue, in 1995 both Argentina and the United Kingdom, through a joint declaration, agreed to cooperate on the matter of exploration and exploitation of offshore oil and mineral within set distance boundaries. The United Kingdom unilaterally decided to break from the agreement by engaging in three activities: they granted licenses for exploring outside allocated distances; they granted fishing licenses, and they have maintained a military base with a capacity to operate far beyond the disputed area. In response, in 2007 Argentina decided to terminate cooperation in the South West Atlantic. The United Nations passed Resolution 3149, which encouraged both countries to resume negotiations and diplomatic efforts while refraining from unilateral decision-making.

Mr. Argüello concluded that after more than 20 years of restoration of bilateral problems, sovereignty questions have not been addressed. “It is absolutely clear that the UN resolutions are not being obeyed by one of the two members as part of the discussion.” He, then, opened the floor to questions and discussion.

Questions from the public

A number of engaging questions were asked, including Argentina’s position given the energy crisis in general and its role in the search for minerals and oil in the South Atlantic. The Ambassador responded talking about regional cooperation to ensure that energy remains at the top of the regional agenda. Argentina has relied on nuclear energy since the 1950s. He explained that there are bilateral agreements between Brazil and Argentina since Brazil has identified an important reserve of oil. He drew on the example of British Petroleum in the Gulf of Mexico, which he warned has more solidity than the companies exploring for oil in the South Atlantic, which could foreshadow disasters in the future. Mr. Argüello was asked if Argentina was also engaging in oil exploration. He answered that Argentina is not exploring as much as they can because they are prevented by the British navy and do not wish to provoke a violent response. He described the precarious situation in the South Atlantic where the British naval base is used to train military that are then sent to Iraq and Afghanistan. He expressed the wish that Argentina ought to be doing more oil exploration in the area.

When a member of the audience expressed doubt over the possibility of a peaceful solution, the Ambassador insisted, “there is no alternative but a peaceful solution.? Argentina has been working hard on creating the political will to engage in negotiations especially through solidarity from the developing world, Russia, Arab countries, and China. He expressed his optimism, “I’m pretty sure we will make it if we are persistent with our work”. Another audience member agreed with Mr. Argüello that ?a non-peaceful solution is a bankrupt one” and asked about the internal politics in the United Kingdom and how that may influence progress in negotiations. Mr. Argüello, in turn, drew a distinction between the conservative party leaders who refuse to even talk and labor party leaders who have some level of understanding. He explained that the legacy of Margaret Thatcher is still very strong and suggested that time will play an important role.

An audience member drew the link between the territorial disputes in the South Atlantic to the decolonization debates in Puerto Rico and Hawai. Mr. Argüello described the relationship between the U.K. and the U.S. as a “privileged alliance”. During the war in the South Atlantic, he explained, the U.S. did not play a neutral role since they provided logistical help through the use of satellites to the U.K. He contrasted this fact with U.S. Secretary of State Hillary Clinton’s claim when she visited Argentina that the United States is neutral and does not have a position on the substance of the problem.

An English audience member while agreeing that the United Kingdom has often worked unilaterally, asked about the opinions of the inhabitants of the island and whether their opinions ought to count more. The Ambassador responded that when Argentina gained independence, six consecutive governors presided over the Islands until the Royal Navy was embarked. All the Argentines were forced to leave the Islands and no further Argentines were allowed to move to the Islands. He expressed hope that in the future there will be an opportunity to begin bilateral negotiations.

Director of the Observatory on Latin America (OLA) at the New School, Michael Cohen, introduced Ambassador Jorge Argüello in the Orozco Room at the New School. Argüello was invited to talk by the OLA, explained Cohen, which tries to create a space in New York for Latin American voices unmediated by the American press. Cohen further talked about the significance of the location of the talk, which he described as “the inner sanctum of the New School” because it is where important decisions are made. After a brief history of the OLA, Cohen announced upcoming events including talks by Peru’s presidential candidate Ollanta Humala on October 21st and Alicia Bárcena, Executive Director of the United Nations Economic Commission for Latin America and the Caribbean, who will be talking about equality in the region.