The Observatory on Latin America (OLA) of the New School,
Consejo Profesional de Arquitectura y Urbanismo (Comisión de Urbanismo y medio Ambiente)
and Café de las Ciudades, Argentina,
are pleased to invite you to the presentation of the book: 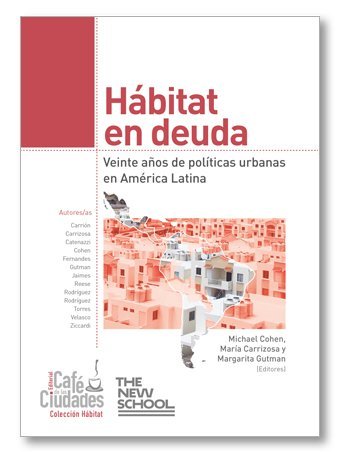 This book has been produced by the Global Urban Futures Project, supported by the Ford Foundation, and the Observatory on Latin America (OLA) at the Milano School of International Affairs, Management and Urban Policy of The New School, New York. Its purpose is to evaluate the progress made by six major Latin American countries, Argentina, Brazil, Chile, Colombia, Ecuador and Mexico, as they face the challenges of accelerated urban growth in the last two decades. The critical evaluation of progress in each country was carried out by distinguished professionals: Eduardo Reese, Andrea Catenazzi, Fernando Carrión, Edesio Fernandes, Alfredo Rodríguez, Paula Rodríguez, Jorge Enrique Torres, Alexandra Velasco and Alicia Ziccardi.

This evaluation has been carried out within the historical framework of the commitments made by national governments at the United Nations Habitat II Conference held in Istanbul in 1996. This framework included a number of general commitments that states should address: urban management, politics, housing, infrastructure, environment, urban form, and productivity of urban economies to contribute to national economic growth. The experience of political reform and institutional development in these countries is an important reference point for considering how the 2030 Sustainable Development Goals adopted by all member states of the United Nations in September 2015 will be implemented.

Twelve of the seventeen objectives should be implemented in cities in the 2015-2030 period, as well as the New Urban Agenda approved by UN-HABITAT at its Third Conference held in Quito last October. This requires that urban planning and policy must be strengthened by acquiring a broad multisectoral approach in which these problems are addressed in order to achieve the goals of sustainable development and social justice. These objectives are universal and relevant to all countries, whether industrialized or developing. What is at stake for the countries and for the world as a whole is considerable, whether it be the threat of climate change, growing inequality or the need for inclusive economic growth.

The event will be in Spanish. No simultaneous translation available.
Admission is free, but seating is limited. Reservations are required.
Please RSVP here