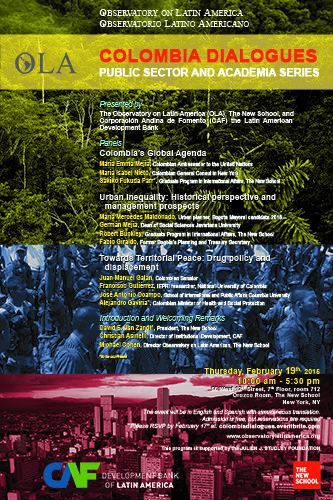 Colombia Dialogues brings together current or former public officials with leading roles in shaping the social or development of the country, and highly committed scholars nationally or internationally recognized. The event will have three panels: Colombia’s Global Agenda, Urban Inequality: Historical perspective and management prospects, and Towards Territorial Peace: Drug policy, displacement, and rural development.
OLA is pleased to announce its partnership with CAF (Corporación Andina de Fomento) initiating the Public Sector and Academia Dialogue Series at The New School. CAF is the only development bank owned by Latin American countries, and its share in the development multilateral finance has been growing at a remarkable pace over its last 40 years..

The event is, free and open to the public; simultaneous translation will be available
Seating is limited, reservations are required
RSVP by February 17th to colombiadialogues.eventbrite.com