Conversation with Young Leaders of Argentine Political and Social Movements 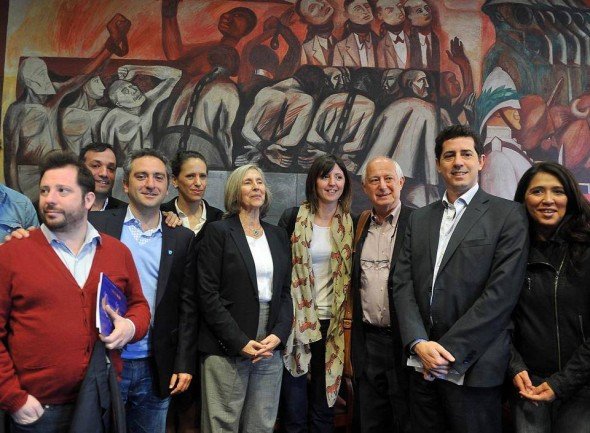 The Observatory on Latin America organized a meeting of young leaders of Argentine political and social movements with faculty and graduate students of The New School. The delegation was accompanied by Cecilia Nahón, the Ambassador of Argentina to the United States, and included representatives of different groups and political tendencies who are national and provincial congressmen (Andres Larroque, Eduardo Wado de Pedro and José Ottavis of La Cámpora; Leonardo Grosso of Movimiento Evita), civil servants (Hernán Reibel, Under-Secretary of Communication), and activists (Victoria Montenegro, recovered granddaughter of disappeared parents, and Secretary of Human Rights of Kolina; Leandro Santoro, leader of the Juventud Radical, Los Irrompibles group).

Also present in the meeting at the New School were Lucila Rosso, Director of International Technical Cooperation of the Ministry of Foreign Affairs, and Pablo Vilas, Director of the Casa Patria Grande in Buenos Aires.

They were received by David Van Zandt, President of the New School, and spoke with seven professors and 15 doctoral and master’s level students from the Milano School of International Affairs, Management and Urban Policy, coming from the United States and different Latin American and European countries. The conversation focused on three subjects: the process of political and social reform in Argentina since 2003, the impact of the global economy on Argentina, and human rights.

The leaders explained the significant opening up of the political system since 2003, the growing recognition of human rights and political representation, and the emergence of new opportunities for younger people to participate in social and political movements. The decision of President Cristina Fernandez de Kirchner to appoint younger people to senior positions in the government has given further impetus to the process of reform.

The leaders also spoke about the impact of the “vulture funds” representing bond holdouts on the Argentine economy. They noted the strong political support which Argentina had received from many governments and regional blocs including UNASUR, MERCOSUR, the Group of 77 plus China, as well as the IMF.

+ See press coverage of the event