Creating Jobs in a Time of Global Crisis. Public Lecture by Carlos Tomada 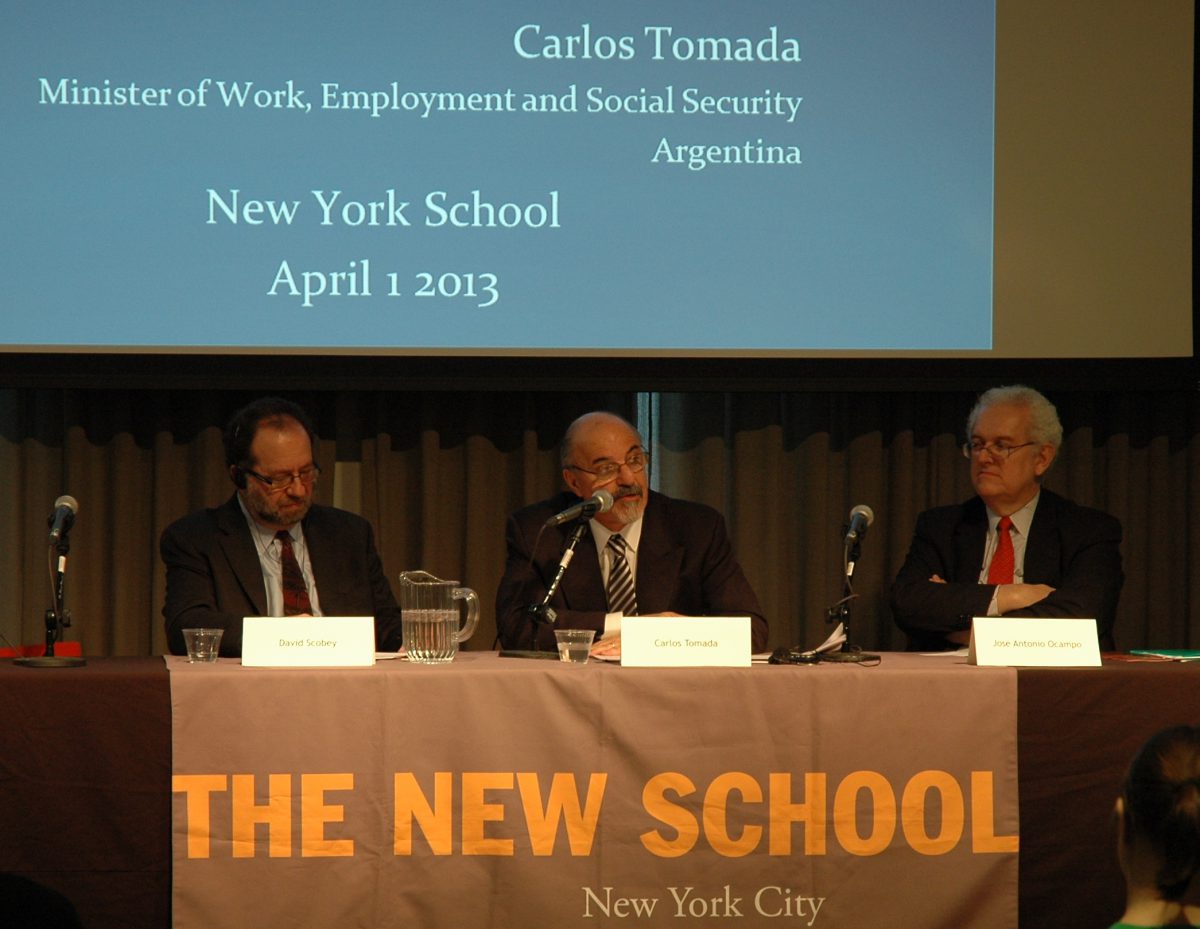 Before an audience of 100 people, the Minister of Employment, Labor, and Social Security of Argentina, Carlos Tomada, offered a broad look at the labor policy of his Government, which is one the world’s most ambitious redistributive policies. José Antonio Ocampo, Professor at Columbia University, was invited to give a comparative perspective from Latin America, and offered comments on Minister Tomada’s presentation. He drew on his experience as former Executive Secretary of ECLAC, United Nations Under-Secretary for Economic and Social Affairs and as the former Minister of Economy and Agriculture of Colombia.

Michael Cohen, Director of the OLA and Director of the Studley Graduate Program in International Affairs at the New School, began the event by emphasizing the role of the OLA as a space for dialogue on policy where Latin Americans themselves lead the discussion: “Latin America has much to teach, and it is Latin Americans themselves who must lead the conversation”. In the same vein, David Scobey, Executive Dean of The New School for Public Engagement and member of the OLA´s Advisory Committee, explained that globalization today – unlike other times in history – is decentralized and multi-centric. Social capital circulates in all directions: today Latin America is teaching lessons to the world.

Minister Tomada recalled one of Ocampo’s phrases: “social goals must be at the center of economic policy”, and added: “Why is it that great thinkers such as Ocampo and Stiglitz are listened to, but not heard?” The social effects of neo-liberalism in Latin America during the ’90s were so drastic that even Cristina Fernández said that “self-regulated markets don’t work as they say.” Tomada explained how Argentina was able to react to the rise of unemployment, poverty, and informality, the undesirable consequences of neoliberalism. He described how Argentina managed to introduce a virtuous cycle of income and consumption, which buttressed the domestic market while reducing the social debt. The outstanding results described also resulted in a particular governmental circumstance: a decade of continuity in the Government’s policies. Unemployment, for example, went from 23% in 2002 to 7% in 2012, a result experts claimed would take 10 years to achieve.

Argentina’s strategy shifted from a social protection policy to a labor policy. As such, it redefined labor as a granter of citizenship and as an avenue towards equity. This Argentinian policy of “decent work” not only focuses on macroeconomics, but also on institutional recovery, protection, and social inclusion policies. Its substantive achievements not only improve social protection, formal employment, and real income indicators, but also claim that “social security is not a privilege of the rich countries. Countries are rich because they have social security and extended protection.” Of course, it is recognized that this process is cumbersome and challenging, to which Tomada concluded: “our project, for being democratic, is always unfinished.”

Ocampo confirmed that Argentina’s redistributive policy is recognized internationally, and he praised it as an implementation of one of his strongest beliefs: that “universality is the best focalization strategy.” He also recalled that the economic recovery in the period 2003-2008, achieved the greatest drop in poverty rates in Latin America’s history. However, he was concerned with the macroeconomic sustainability of these policies, especially in the face of the “war of the exchange rates,” in which developing economies that are not oil producers, inevitably tend to shrink.

Minister Tomada and José Antonio Ocampo answered questions from New School faculty and students, as well as participants from other organizations.

The event was in Spanish and English with simultaneous translation

Wach the video of the event: