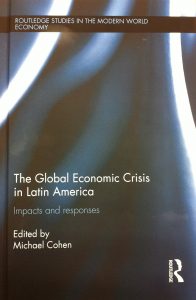 When the 2008 financial crisis rippled from the epicenter in the United States across borders into economies both near and far, many countries were caught by surprise. The bursting of a housing market bubble in the United States caused persistent economic and social detriment through 2011 especially in the United States and the European Union. The Global Economic Crisis in Latin America: Impacts and Responses is an examination of the heterogeneous Latin American region through the lens of three countries: Mexico, Brazil, and Argentina.

An edited volume with chapter contributions by the foremost thinkers from Latin America, the book asks the questions: why were these three countries more resilient to the crisis than the United States and the countries of Western Europe? Why were Mexico, Brazil, and Argentina more resilient to the 2008 financial crisis than during other financial crises in their respective histories? What explains the difference in performance among Mexico, Brazil and Argentina? Through what channels did the crisis arrive at the region? What was the role of the state before, during and after the crisis? What role did stimulus packages play? How was municipal finance affected? How were people on the ground, the street vendors and the waste pickers, affected by the crisis?

Divided into three sections, the first part of the book sets the global context while the second part describes country experiences. The third section presents cross-cutting themes, looking deeper into the aggregate experience by probing how the crisis was experienced at municipal levels. How did it affect informal workers? Why were some stimulus packages more effective than others?

The Global Economic Crisis in Latin America describes the composition of policy instruments used in meeting the challenges of a global economic crisis. There is a gradation in experience in which Brazil recovers quickly from the crisis, Argentina recovers steadily at a slower pace, and Mexico recovers slowest. In contrast to the United States and Western Europe, however, the three countries manage their policy instruments so as to grow their economies while also reducing inequality.

What emerges from the narrative is at once surprising and expected. These three countries, to varying degrees, have brought back policy instruments dating back to the 1940s and 1950s when the region was thriving based on state led industrialization. In an uncertain global environment, The Global Economic Crisis in Latin America suggests that the period of experimentation that the region has been undergoing since 2002 has been and will be essential to shielding the region from global economic chaos. Since approximately 2002, the governments of the three countries have had to be nimble, finding a balance between growth and equity, anticipation and reaction, optimally limiting external effects while fostering internal markets. What remains to be seen is the degree to which Latin American countries will have the space to decide their own development trajectories.

1. “How Well Has Latin America Fared During the Global Financial Crisis?,” by José Antonio Ocampo.

2. “The Global Economic Crisis: What Does It Mean for the Developing World,” by Deepak Nayyar.

5. “The Mexican Economy and the International Financial Crisis,” by Juan Carlos Moreno-Brid.

6. “The Global Recession and the Informal Economy: Evidence from Latin America and Beyond,” by Martha Chen.

7. “Understanding Impacts and Strengthening the Performance of Stimulus Packages,” by Michael Cohen.

8. “Municipal Finance and State Performance in the Crisis: The Experience of Brazil and Mexico,” by Mitchell Cook.

Michael Cohen is the editor of The Global Economic Crisis in Latin America: Impacts and Responses. The book has been published by Routledge.