On Tuesday July 5th, the Faculty of Architecture and Urban Design at the University of Buenos Aires (FADU / UBA) hosted the “Urban Dialogues Latin: Habitat III Habitat II” Public Conference. The event was organized by the “Global Urban Futures” project of The New School University in New York, with support from the Ford Foundation and in collaboration with CAF, the Observatory on Latin America –OLA- at The New School, and the International Programs Direction at FADU / UBA.

Experts on urban planning in Latin America presented a qualitative assessment of the compliance of the commitments made in Habitat II (1996) by six Latin American national governments. These experts presented a critical perspective of the urban processes of Argentina, Brazil, Chile, Colombia, Ecuador and Mexico between Habitat II and Habitat III, to an audience of more than 120 people.

The analyzes presented will be part of the preparatory sessions for Habitat III to be held in Surabaya, Indonesia, in July 2016.

Welcoming words by Marcelo Lorelli (Assistant Professor, Political Secretary of Communications and Student Policies at FADU / UBA), Pablo Lopez (Chief executive of CAF in Argentina) and Michael Cohen (Co Director, OLA / The New School), highlighted the importance of universities in the process of having neutral and rigorous evaluations of the levels of compliance with the commitments made at Habitat II. 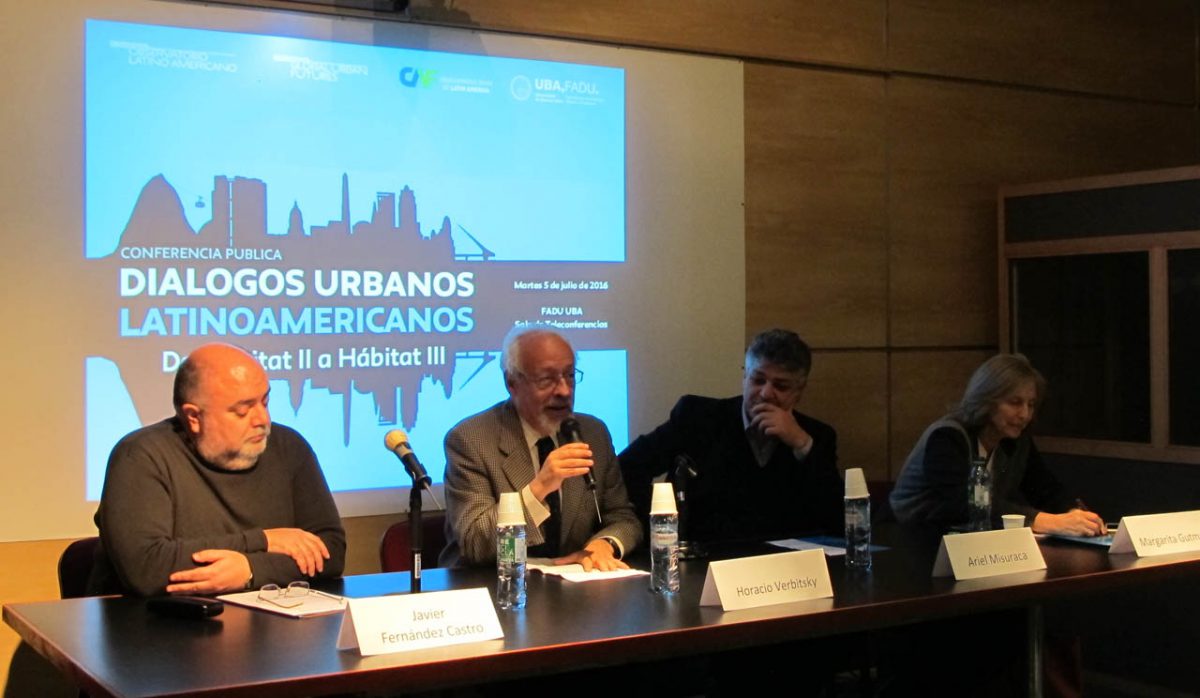 The first panel “The Debate in Cities in Times of Change”, was moderated by Ariel Misuraca (Professor and Secretary General, FADU/ UBA), and was composed by Horacio Verbitsky (President of the Center for Legal and Social Studies – CELS), Javier Fernández Castro (Professor, FADU / UBA); and commented by Margarita Gutman (Professor Consultation FADU / UBA, Professor, The New School). The director of CELS said the urban problem is an important challenge both for Argentina and the region, and human habitat is the origin of the major problems and challenges human rights and social justice have to confront. He also assured that the draft Urban Agenda for Habitat III does not speak of inequality or the market, two key concepts needed to understand the problems cities are facing today. In relation to current events, Verbitsky referred to how the agenda that sought to expand existing rights in the country has been threatened for over seven months 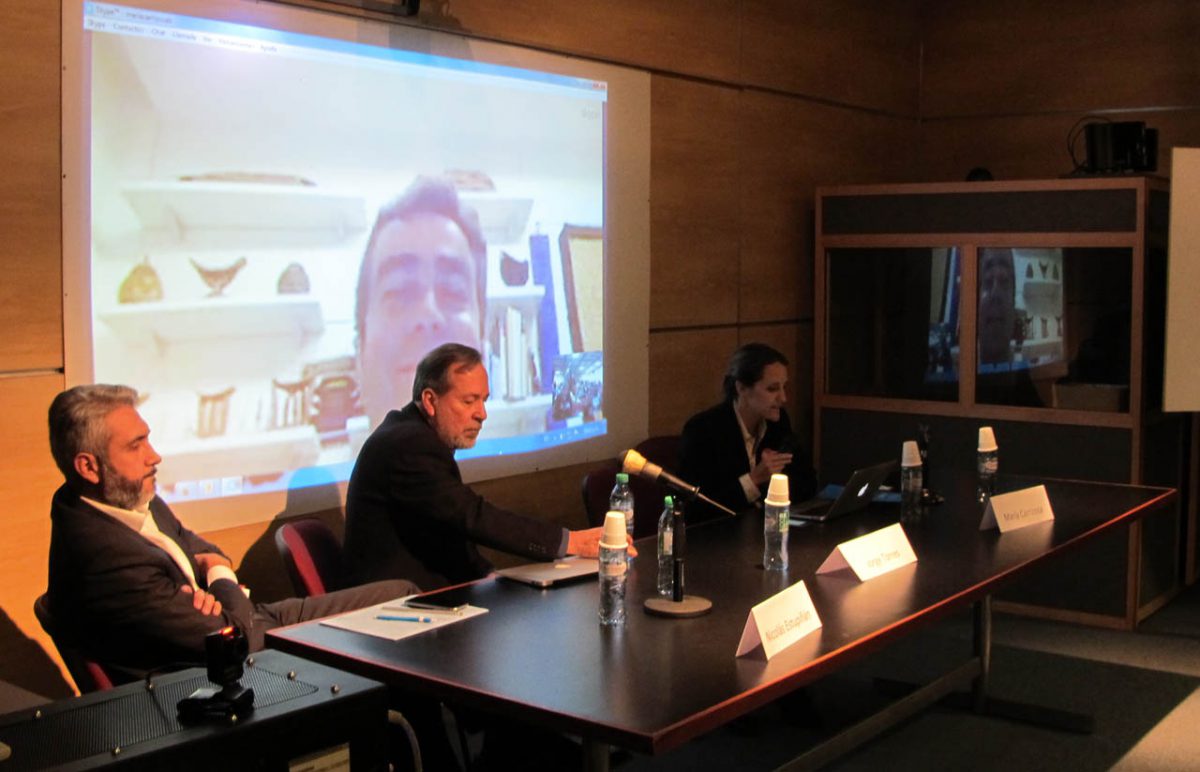 . Javier Fernández Castro, said that from his role as a professor, he sees how the University “must be a place where to identify on what, how, and when to act.” He also finished his presentation by inviting the audience to propose new elements to discuss in relation to the access to habitat. Finally, Margarita Gutman closed the panel with a comment on the times of change the region is undergoing and pointed out how these changes are often accompanied by deep local crises that lead to reversals in the conquests over improvement of rights so far achieved. However, her proposal was concise “if we do not fight for the future and goals, the future is a luxury that already has owners.””. 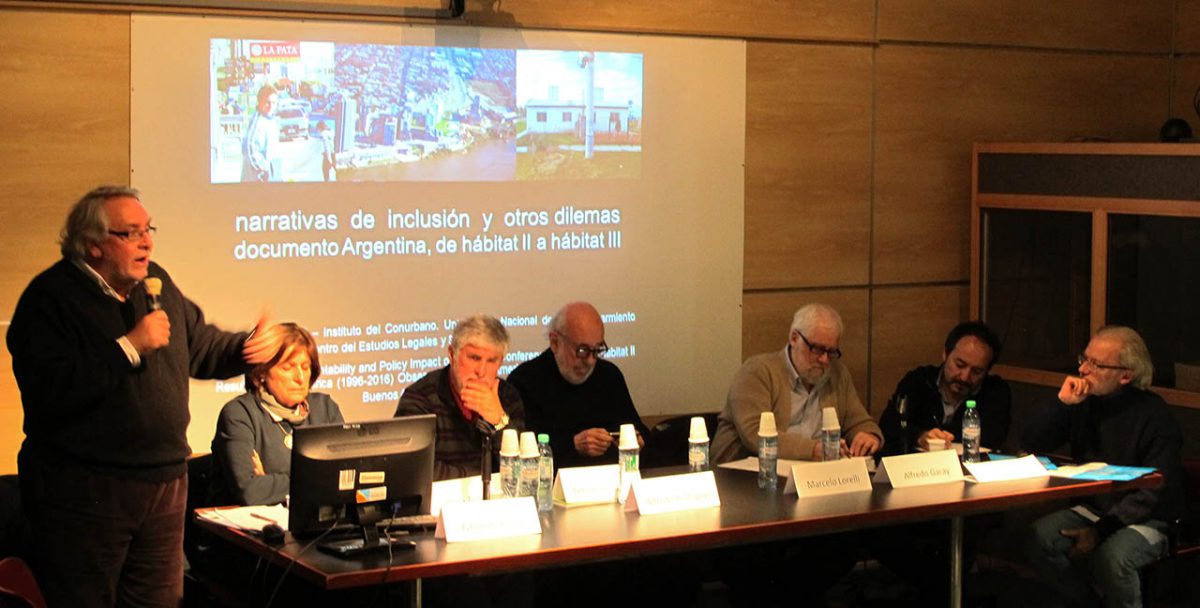 The second panel “Brazil and Colombia: many laws, poor implementation” moderated by Maria Carrizosa (Coordinator OLA / The New School and Teaching Feloow at The New School), was composed by Edesio Fernandes (Professor of Development Planning Unit, University College, London), Jorge Torres (Center for Studies of Construction and Urban and Regional Development – CENAC) and was commented by Nicholas Estupiñán (Senior Executive – CAF Argentina). Through a videoconference Brazilian consultant Edesio Fernandes, began his presentation by characterizing the period after Habitat II in his country as a period of great proliferation of urban regulations. However, he warned that it was not accompanied by a political decision to confront the structure of rent and the price of land. In this regard, various government programs have failed to combat informality. 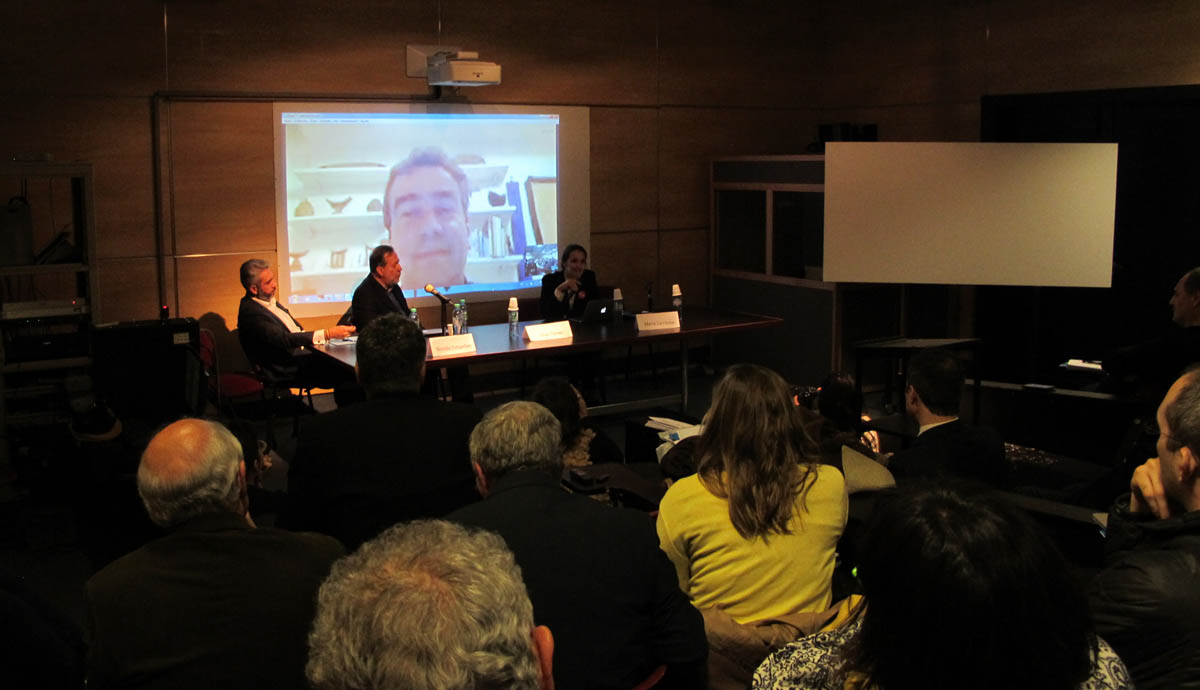 Jorge Torres spoke about the situation in Colombia indicating that in general terms the country did follow the precepts of Habitat II. During the past 20 years there were processes of open participation, but such participation was concentrated in an elite. He stressed that, despite the proliferation of urban regulations, implementation was hampered by the lack of financial and technical resources in the hands of local governments. Finally, Torres warned that in Colombia housing policy has co-opted urban policy and particularly the production of new housing, which has been preferred over the regeneration of the existing stock. Finally, Nicolas Estupiñán, referred to transport as a crucial element that must be incorporated into the new urban agenda. 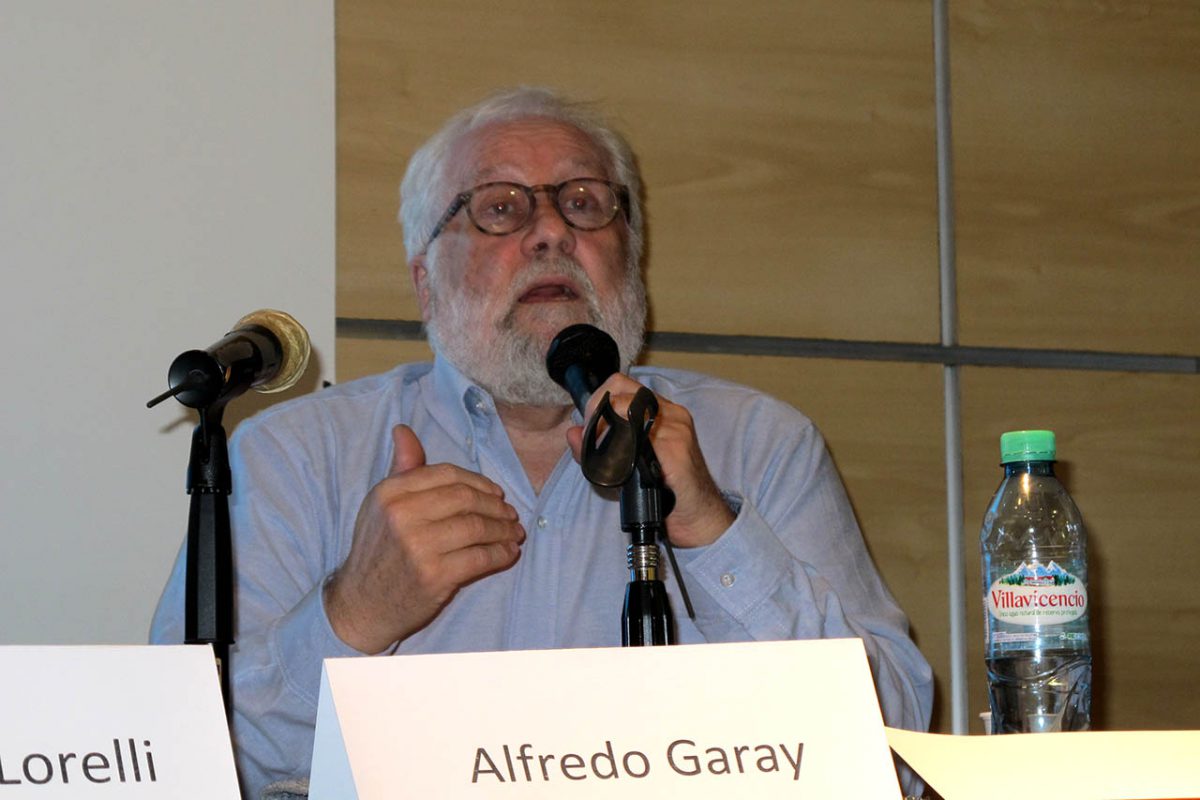 Alicia Ziccardi (Director, University Programme of City Studies, Autonomous University of Mexico – UNAM), Alfredo Rodriguez (director, Corporation -SUR Social Studies and Education); and it was commented by Marcelo Lorelli and Alfredo Garay (Professor, FADU / UBA). Eduardo Reese began by saying that “in Argentina, Habitat II has had no impact on public policy” and he further pointed out how economic and social processes have been undermined indicating that in the last decade the main feature in the country was “a contradiction between neo-developmental policies for infrastructure and neoliberal land policies.” Fernando Carrión made a strong criticism of UN Habitat by stating that a new urban agenda relegates a critical analysis of everything that was left behind. Carrion also proposed that municipal governments should be the main actors in these global forums where the main discussions on urban matters take place. “At Habitat I and II, the city was seen as an object, and it was never considered as the subject”. 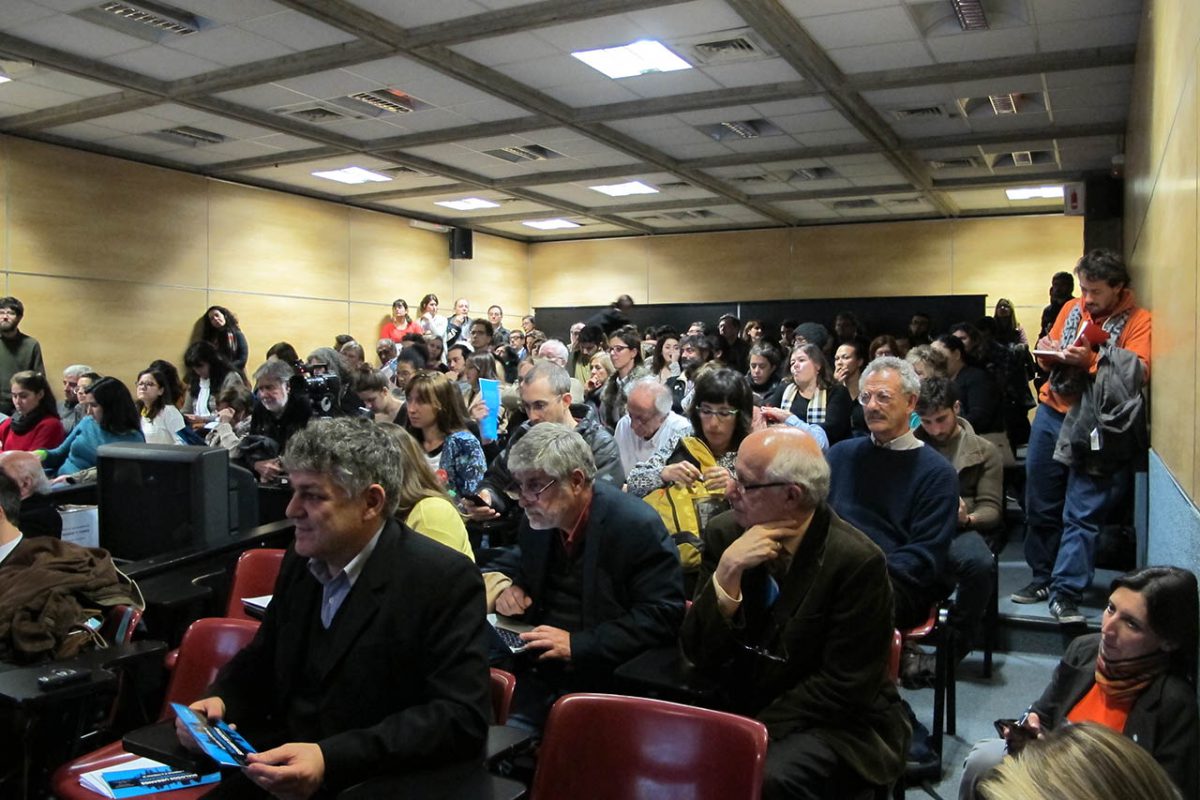 Finally, the cases of Mexico and Chile were presented, showing how both countries share the problem of habitability. Both Ziccardi aand Rodriguez noted that in their countries the biggest problem in the last 20 years was not quantitative housing production but poor quality and location of the housing units produced. Both consultants presented examples of the problems derived from mass housing construction and which did not finish solve the habitat problem in their respective countries. Lorelli made comments and highlighted the main elements in each presentation, while Garay pointed to the complexity of urban policies and processes, and the importance of local knowledge. In conclusion Garay invited the audience to transform reality through practice.