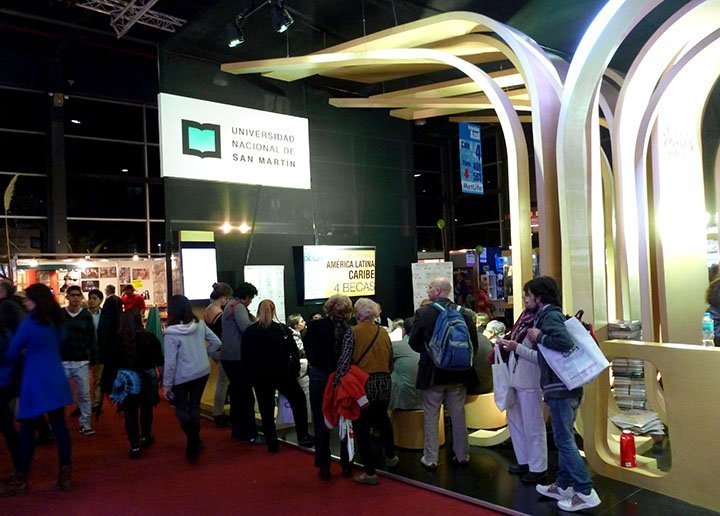 The second Round Table “Political Academy. Training of young leaders.” was held at the stand of the Universidad Nacional de San Martín.

Marcelo Bufacchi and Christian Asinelli (PNK Fellowship Directors for the UNSAM), along with Alexandre Roig (Fellowship Juror, and Dean of the Institute of Social Studies, UNSAM), were interviewed by Flavio Rapisardi (Dr. in Social Communication, Nacional University of La Plata, Argentina) on the features of the Fellowship and the main challenges in the current call. Due to last minute agenda overlapping Juan Manuel Abal Medina, Senator of the Nation, could not be present, but sent words of encouragement to this initiative which he has accompanied from its first steps, “this Fellowship, born from a relationship which began with the visit of Nestor Kirchner to the New School, is the continuation of that work, but also a bet on the future we want to continue building, a future of a standing and united Latin America”.

The table was opened by Marcelo Bufacchi, who said “What we celebrate in this edition is that Fellowship is here, and here to stay. In this edition the call has been extended to all of Latin America and the Caribbean.” The Director also highlighted fundamental and characteristic points of the Fellowship such as the combination of academia and politics, and the importance of a venture between two universities such as The New School and UNSAM from different countries. Following Bufacchi’s words, Alexandre Roig spoke about the Fellowship’s unique regional spirit “The Fellowship vindicates the spirit of Nestor Kirchner. A Latin Americanist escence open to everyone, facing the region but always in relationship with the United States and the outside, not closed in on itself.”

Christian Asinelli highlighted other aspects of the grant “beyond the trip to New York”, emphasizing the relations that began to spawn from this initiative in the various activities and seminars to which the fellows and finalists are invited. The Directors also praised the creation of “the PNK Fellowship Community”, and the possible publication of a book containing the winning essays.

Among the various features mentioned, one that deserved special attention was the idea of “young leader”. Following the trigger proposed by Raspisardi, Bufacchi commented “To lead is to uphold the principles of social justice, of equality, of Latin American inclusion,” Roig added “The aim is to train leaders with an academic and political sense, bearing in mind the sense of history”, while Asinelli pointed out Nestor Kirchner’s figure as a conductor, differentiating him from the simple leadership role.

The table was closed by both Fellowship Directors, who invited all the young people present to postulate in the 2015-2016 edition which will remain open until May 25th.

The PNK Fellowship has been expanded to all Latin American and Caribbean countries, and will award four fellowships for 2015-2016!Information is open, and submissions deadline is May 25th, 2015