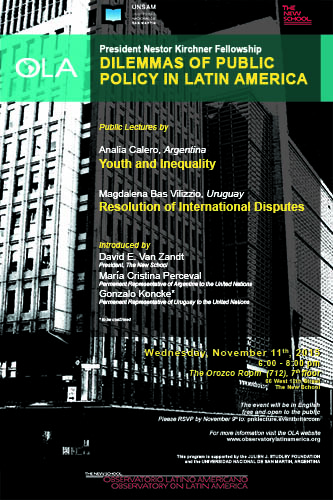 The New School Observatory on Latin America (OLA) and Universidad Nacional de San Martín (UNSAM) are pleased to present the public lectures by Analia Calero and Magdalena Bas Vilizzio, President Néstor Kirchner Fellows for 2015/2016. Both were awarded a Fellowship after demonstrating academic excellence and a commitment to public service.

Youth and multidimensional inequality: the case of Argentina 2004-2014 in the Latin American context, by Analía Calero
Critical analysis of the inequalities experienced by young people in different dimensions such as health, education, housing and decent employment, in the context of public policies implemented in the last decade to reduce those inequalities.

Ms. Calero holds a BA and a MA in Economics, and is a Doctoral Candidate in Economics. She currently works as Principal Analyst at the Employment and Social Protection Ministry of Economy, ­National Office of Macroeconomic Policy of Argentina.

Ms. Bas Vilizzio received a BA in Law and Social Sciences and a Degree in International Relations. She holds a Master in Project Design and Management, and is candidate in a Master in Foreign Trade. Magdalena is actually a Professor at the Universidad de la República and Universidad de Montevideo. As a researcher, she studies international dispute settlements, bilateral investment treaties, integration and other topics regarding International Law.

The Lecture will be in English.
Free admission, limited seating.
Reservations are required.
Please RSVP by November 9th to pnklecture.eventbrite.com

THE PNK FELLOWSHIP HAS BEEN EXPANDED TO ALL LATIN AMERICAN AND CARIBBEAN COUNTRIES, AND WILL AWARD FOUR FELLOWSHIPS FOR 2016-2017
INFORMATION IS AVAILABLE, AND SUBMISSIONS WILL BE RECEIVED FROM
MARCH 1ST TO MAY 25TH, 2016!