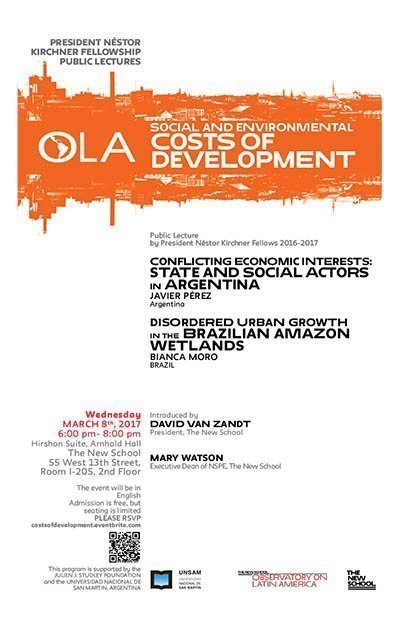 Social and Environmental Costs of Development

The New School Observatory on Latin America (OLA) and Universidad Nacional de San Martín (UNSAM) are pleased to present, in this 6th consecutive year of the President Néstor Kirchner Fellowship, the 2016-2017 Fellows: Javier Ignacio Pérez Ibañez and Bianca Moro de Carvalho, who were awarded this Fellowship after demonstrating academic excellence and a commitment to public service.

This study describes Argentine development policy through the lens of interested economic actors, or what is known in economic sociology discourse as “embedded autonomy”. It explains some particularities of the Argentine macroeconomic environment (external restriction, Dutch disease), focuses on the effects of industrialization in the soybean commodity chain, and it finally argues for the importance of state intervention to guarantee social inclusion.

Mr. Pérez Ibañez has a BA in Sociology (University of Buenos Aires) and is a graduate student in Economic Sociology (IDAES, Universidad Nacional de San Martin UNSAM). Holds a specialization in International Trade and teaches on related subjects at Universidad Nacional de Avellaneda and at UNSAM. Mr. Pérez Ibañez has experience working as foreign trade analyst at YPF in Argentina.

This work describes the informal encroachment of the Amazonian wetlands of Macaná, capital of the State of Amapá, as well as the participatory efforts to face this issue by the Federal University of Amapá. Amapá is the most recent and largest rainforest protected area of the world. However, its urban center faces serious problems. Thousands of residents are under the poverty line, have little to no social protection, and dwell in substandard conditions. Conditions are worse in riparian areas, mostly government-owned land that is informally occupied.

Ms. Moro de Carvahlo holds a PhD in Urbanism from Universidad Nacional de México, as well as a MA in Housing and Urbanism from the Architectural Association in London. She holds a faculty position at Universidad Federal de Amapá, and has been Coordinator of Housing of the Amapá State.

The Lecture will be in English.
Admission is free, but seating is limited.
Reservations are required.
Please RSVP by March 7th at costsofdevelopment.eventbrite.com

THE PNK FELLOWSHIP REACHES ALL LATIN AMERICAN AND CARIBBEAN COUNTRIES, AND WILL
AWARD FOUR FELLOWSHIPS FOR 2017-2018!

INFORMATION IS AVAILABLE, AND SUBMISSIONS WILL BE RECEIVED FROM MARCH 1st TO MAY 21st, 2017