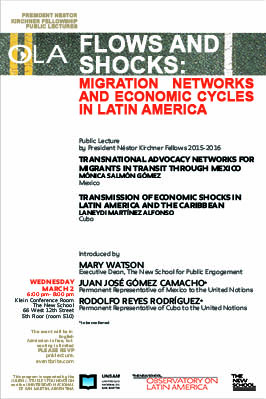 The New School Observatory on Latin America (OLA) and Universidad Nacional de San Martín (UNSAM) are pleased to present the public lectures by Mónica Salmón and Laneydi Martinez, President Néstor Kirchner Fellows for 2015/2016. Both were awarded a Fellowship after demonstrating academic excellence and a commitment to public service.

Transmission of Economic Shocks in Latin America and the Caribbean, by Laneydi Martínez Alfonso
How do economic shocks spread across countries? This research explores the interactions between the US Latin America and the Caribbean (LAC), and traces the patterns of influence and dependency as being reproduced through the international monetary and financial architecture.

Ms. Martinez Alfonso is professor and researcher from the Center for Hemispheric and US Studies at the Havana University. Current PhD student in Economics at Havana University (Cuba) and Sorbonne Nouvelle (France). She has been visiting professor in the US, research fellow in France, and coeditor of an international specialized journal from Argentina.

The Lecture will be in English.
Admission is free, but seating is limited.
Reservations are required.
Please RSVP by Wednesday, February 24th at pnkpubliclecture2016.eventbrite.com

THE PNK FELLOWSHIP HAS BEEN EXPANDED TO ALL LATIN AMERICAN AND CARIBBEAN COUNTRIES, AND WILL AWARD FOUR FELLOWSHIPS FOR 2016-2017
INFORMATION IS AVAILABLE, AND SUBMISSIONS WILL BE RECEIVED FROM
MARCH 1ST TO MAY 23rd, 2016!