The Observatory on Latin America (OLA) of the New School is pleased to invite you to: 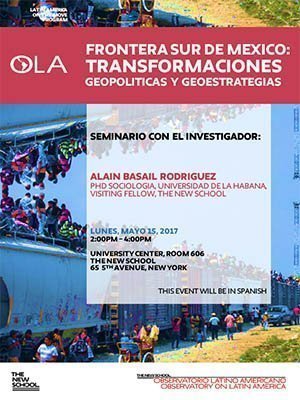 This talk illustrates the current problems of the southern border of Mexico with the north of Central America, where both, emerging dynamics and historical conflicts become evident. Basail’s research focuses on geopolitical, human, and cultural realities. It conceives the frontier as an anthropological place and as geostrategic milieu of dynamic qualities, multiple definitions, (trans)national proportions and global gravitations.

Alain Basail Rodríguez holds a PhD in Sociology from the University of the Basque Country and from the University of La Habana (2002). Basail’s work is dedicated to historical sociology, studies of culture, social change and borders. He is a member of the CLACSO Steering Committee representing the Mexican centers. He was a professor at the University of Havana (1995-2003). Since 2004 he is full time Professor and Researcher at the Center for Advanced Studies in Mexico and Central America (CESMECA), at the University of Sciences and Arts in Chiapas, Mexico, which he directed between 2011 and 2015. Basail is author of: The Red Pencil: Press, Censorship and Cuban Identity (1878-1895) (2004) and Strange Nature: Disasters, risks and public knowledge in Chiapas (2017). He has also been coordinator of several specialized books on sociology, sociocultural anthropology, borders, migration, and religion in Latin America.

THIS EVENT WILL BE IN SPANISH