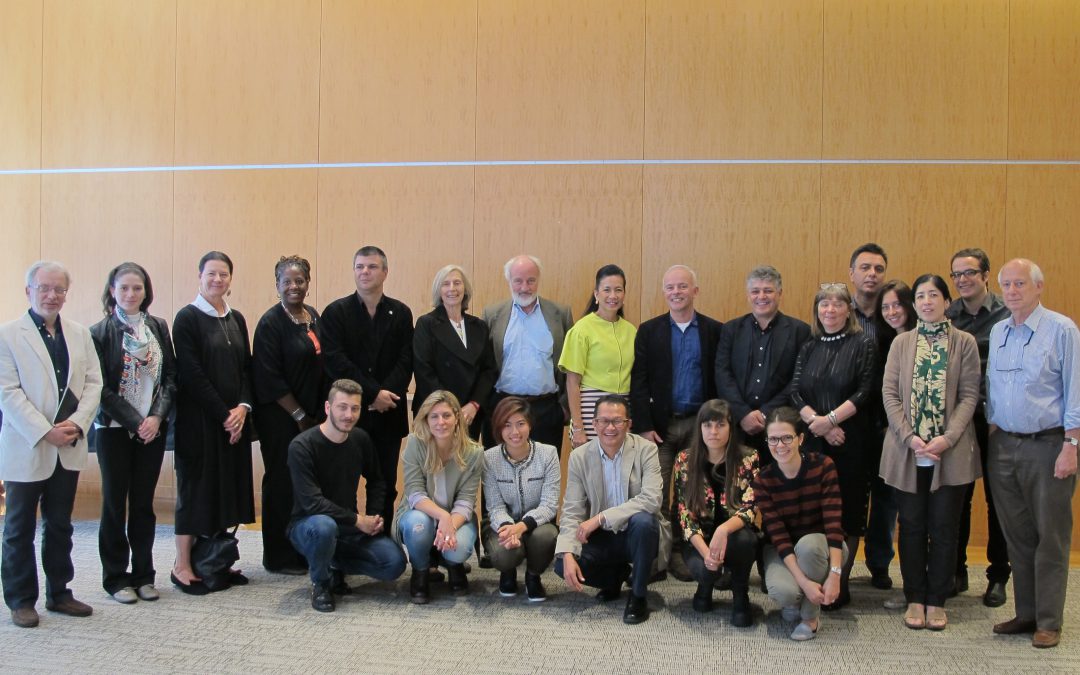 The third international Design and Development Symposium, “Making Cities i³: Innovation, Incubation, and Inclusion” was held last month in New York. The event included visits to sites where innovation is taking place in New York, panels and discussions with academics and students, a workshop in the field and closed with a debate between deans from the three participating universities from around the world.

The symposium, a collaborative effort of The New School through the Observatory on Latin America and Parsons The New School for School of Design, the School of Architecture, Design, and Urban Planning (FADU) and the School of Social Sciences (FSC) of the University of Buenos Aires (UBA), and the Faculty of Architecture of Chulalongkorn University in Bangkok, Thailand, gathered faculty and students from these three universities and from different disciplines. The focus of the event was on three processes – innovation, incubation and inclusion – operating to transform the landscape of cities, their spatial organization, economies, and societies. While these terms have different meanings in Bangkok, Buenos Aires and New York, they provide provocative frameworks for analyzing and understanding distinct processes in these three diverse urban environments.

The first activity consisted of a tour in some sites in Brooklyn and in Queens that have faced and are addressing the challenges of innovation, incubation and inclusion through employment, re-using, making, business incubation and design action, around the tensions of informality and formality in New York City. The sites included the Brooklyn Navy Yard, a 300 acre industrial park that is home to innovative firms, shops and groups who redefine local industry; and SITU Fabrication, a digital fabrication shop located in the Navy Yard. The second part of the tour took the group to NY Designs, an economic development program that catalyzes growth for small businesses and entrepreneurs in the design, fabrication, technology. The visit concluded with a visit to maker spaces and the Roosevelt Avenue corridor in Jackson Heights and North Corona, Queens, where the cultural diversity is used for positive attention as well as the opposite kind, to allow for controversial interventions to take place.

The whole group also demonstrated with The New School group along 400,000 people in the streets of New York to demand climate justice ahead of the global warming summit that took place at the United Nations.

Following the opening of the conference by the New School and Consulate authorities, the Argentine Labor Minister Carlos Tomada addressed the audience with remarks on the importance of implementing public policies that are inclusive. “The state, to guarantee inclusion, has to implement policies that are preventive and emancipatory,” he said, as he stressed the social protection and rights measures introduced in Argentina over the last years.

The first panel entitled “Innovation”, focused on how this process takes place as a tool to improve cities in multiple aspects, ranging from the definition of urban plans, to new economic and discursive strategies used to improve our living experience in our cities.

The panel was moderated by Brian McGrath, Dean of the School of Constructed Environments at Parsons; panelists were Margarita Gutman, Associate Professor of Urban Studies and International Affairs, The New School; Preechaya Sittipunt, Architecture Program Director from Chulalongkorn University; and William Morrish, Professor at the School of Design Strategies at Parsons. Gutman, through a historical analysis of the different urban plans that have been implemented in Buenos Aires, highlighted the importance of innovation as a way of creating more inclusive cities. But urban plans in Buenos Aires have had ups and downs, and while some led to some environmental improvements, the absence of implementation of others together with neoliberal economic policies resulted in fragmentation and segregation of the metropolitan area. Sittipunt presented the case of the street vendors in Bangkok as an example of the importance of understanding urban public space as a place where formal and informal economies coexist, confronting the aesthetic and utilitarian view of such public space. Thus, innovation should serve both views by promoting an inclusive urban spatial design that takes into account the existence of informal economic exploitation in the hands of street vendors.

Professor Morrish concluded with a presentation that focused on the importance of innovation and its contribution to the construction of an urban society aware of the social, economical and political realms that define all cities. “Think of innovation as a democratic art”, he pointed out, while showing various examples of social innovation.

Quillian Riano, lecturer at the School of Design Strategies at Parsons, closed the panel by discussing the importance of recognizing the community needs in policy design.

The second panel focused on “Incubation” and was moderated by Miodrag Mitrasinovic and included presentations by Juan Pablo Scagli and Ariel Pradelli, Professors at the UBA Architecture School; Rama Chorpash, Director of Product Design at Parsons, and Siramol On-Sri, a Parsons Product Design Alumni. The presentations ranged in scope and size, from city-wide to human scales of product design and local economic development.

Discussant Guillermo Cabrera, UBA professor, summarized the four presentations and pointed out that “our role as incubators of culture is to construct this kind of thinking”. An audience member questioned the intersection between the micro and the macro scales along with the preparedness of the city in its institutional and physical infrastructure to support local employment. Chorpash, long-time New York resident and designer, acknowledged that there is in fact very little support for inclusive policies in New York City. “Can we have slow product design?,” he asked to turn the question on to values. The panel concluded with Scaglia asking what we really consider inclusion to be in this context. “Is it inclusion to the market or social inclusion? And what kind of social inclusion then?”

The last panel, titled “Inclusion” and chaired by Charles Allison, Professor of The New School, examined the politics of inclusive innovations. Mónica Lacarrieu, UBA Anthropology Professor, introduced the concept of “culture as a resource” into the conversation and defined culture as a contested terrain; while Apiwat Ratanawaraha, from Chulalongkorn University, warned about induced innovation efforts from above, insisting that “innovations from the bottom are automatically inclusive”. Riano, following this last point, stressed the fact that “innovation can easily lead to a conservative society”. The closing intervention of this panel was decidedly provocative. Reversing the focus of the politics of inclusion debate, Studley Fellow Robert Buckley made the point that seemingly progressive land uses can be regressive. After criticizing current subsidies as being contradictorily targeted, he proposed that reconfiguring the land use in New York City, questioning historic preservation, could unleash constraints to development, and increase the stock of low income housing supply.

In his concluding remarks Michael Cohen, director of OLA, highlighted the significance of problematizing the concepts of innovation, incubation and inclusion, followed by commenting about the complex results produced by mixed state and private initiatives like the Navy Yard, the role of urban plans in framing expectations in Buenos Aires case, the innovation at the micro scale presented in Bangkok, and the democratic art mentioned by Bill Morrish who proposed the use of “we make NY” instead of “we love NY”. Cohen also questioned the potential of market oriented innovations to promote social inclusion, and finalized stressing the importance of studying the analytic framework of these approaches as proposed by Adriana Clemente, and the importance of including the time component, history, present and future.

The workshop “Designing Publics: Diversity Plaza”, invited participants to look at the street life of Diversity Plaza, on Roosevelt Avenue and 37th Road in Jackson Heights, Queens. It began with an introduction to the site and current issues by the Design and Urban Ecologies students at Parsons.

In 2011, Diversity Plaza was created to provide more open space near a major transportation hub in Jackson Heights, as part of the larger New York City Department of Transportation Plaza program. The participants, who included the visiting faculty and students from the University of Buenos Aires along with students of International Affairs, Urban Design and the Bachelor’s Program from The New School, formed three groups to asses the site from different perspectives – social infrastructure, communal processes and political economies. Each group, through different lenses, looked at the plaza program and discussed the spatial, economic and social effects on the surrounding areas, including street vending. They brainstormed and questioned ideas on how to encourage inclusive public gathering spaces that can jumpstart local economic activity, including street vending and making. The workshop concluded with the three groups coming back together for an overall discussion, critique and conclusion. The New School students will continue the work on Diversity Plaza for the rest of the academic semester.

The symposium concluded with a conversations between deans McGrath, Alison Mears, from the School of Design Strategies at Parsons; Ariel Misuraca, speaking on behalf of UBA School of Architecture Design and Urban Planning Dean Luis Bruno; Michelle DePass, Dean of the Milano School of International Affairs, Management and Urban Policy at The New School; and Preechaya Sittipunt Director of INDA, Chulalongkorn University.

The deans discussed the different approaches to design each school takes, and how the programs are including more interdisciplinary dialogue and conversations related to innovation and inclusion in the cities.

Mc Grath pointed out the importance of thinking of cities as places where people live. “Urbanism, the act of living the city, is a social act,” he said. DePass highlighted that at Milano both faculty and students are asking “what is the future of the city,” and emphasized the importance of including “the voice of the people we are supposed to be providing a city with” in these debates. Misuraca meanwhile pointed out how the problem of the pollution of the Matanza- Riachuelo river basin in Buenos Aires is tackled from different angles in four different levels at the UBA Architecture school.

In a discussion after the conference came to an end, faculty from the three universities debated the future of the project and the steps to follow.

It was suggested that there should be more focus on specific projects, and analyze the possibility of forming working groups along different thematic areas. The focus, some said, should be on policies and management policies. It was also suggested that the emphasis should be placed on how to test practices and new methods in the cities.

A preliminary agreement was reached on the following: 1) to work on the index of a publication that will gather the papers produced over the last three years the symposium was held; 2) to create an online platform to share information and upcoming initiatives, to identify possibilities for collaboration; and 3) to explore the possibilities of students and professors exchange among the universities framed in the main objectives of the Design and Development program.