A tireless struggle for the right to identity. Conversation with Rosinblit Rosa, vice president of Abuelas de Plaza de Mayo 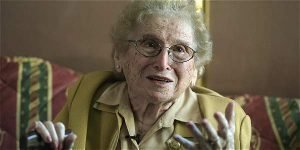 A woman of admirable strength and vitality, grandmother Rosa Rosinblit shared, with a small group of guests at The New School, the history of the Abuelas de Plaza de Mayo. This civic organization began 33 years ago to search for the disappeared which came after the 1976 coup and subsequent military government in the Republic of Argentina. The repressive dictatorship would become, in Rosa’s words, “state terrorism” and it would leave more than 30,000 people disappeared, including pregnant women and children policy of kidnapping, which also included a systematic plan of abduction of children, was the impetus for a group of mothers and grandmothers to initiate a search for their children and grandchildren that still continues today. Where were their children taken? What had become of the babies still in the womb of these victims? Thanks to the admirable work of the Grandmothers of Plaza de Mayo these questions have been finding responses over time. Through public protests, complaints to government authorities, personal research, the use of scientific techniques like DNA and, above all, the perseverance of these women, 102 grandchildren have already recovered their true identity.

The fight for the rights of children, along with the prosecution of those responsible and the “appropriators”, the term used by the Grandmothers to refer to the people who kept these kidnapped babies as if they were their own children, guide the spirit of all those who work and collaborate with the Grandmothers. Many young people, including grandchildren that have recovered their identity, have decided to join the cause and continue with the investigations. As Rosa reminded us with a steady voice at the end of the meeting: “Man is born free and entitled to be free, he has the right to know his true identity.”

+ More information about the Grandmothers of Plaza de Mayo in http://abuelas.org.ar/english