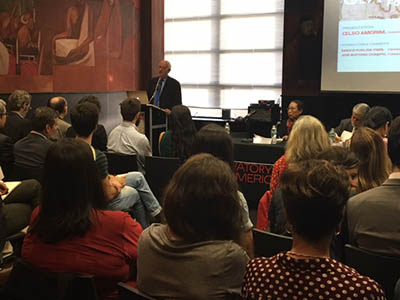 On April 11th, the Observatory on Latin America (OLA) at the New School hosted a book presentation by the renowned Brazilian diplomat Celso Amorim, the longest serving Minister of Foreign Relations in the history of his country, as well as former Defense Minister, and former Ambassador to the United Nations, among other important positions.

Michael Cohen, Director of the OLA gave welcoming remarks mentioning that the title of the OLA program of which this event is part of “Latin America on the Move”, could not be more accurate today. Indeed, things are in high flux in the continent recently. Professor Sakiko Fukuda-Parr, who had been a colleague of Mr. Amorim at the United Nations High-Level Panel on Access to Medicines, gave a warm introduction to the talk mentioning the importance the book: Acting Globally: Memoirs of Brazil’s Assertive Foreign Policy, and highlighting Amorim’s commitment to multilateralism. 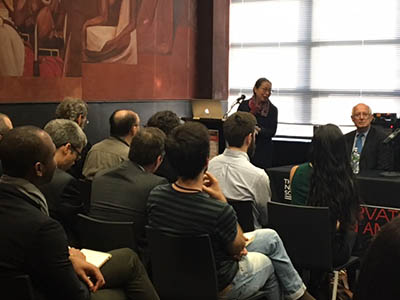 Celso Amorim began his talk reflecting on the map included as part of the book cover. A XVI century map that shows the South above, and the North below. A simple yet strong metaphor of a change in attitude that inspired Brazil’s assertive foreign policy for decades. The talk was a lively journey through the workings and discussions of several key international trade treaties, as well as other diplomatic negotiations, like nuclear conversations involving the US and Iran. Brazil –commented the speaker- is one of the only countries in the world that having so many frontiers (only less than Russia and China), has remained in peace across much of its history. “Just as freedom, peace resembles air: you only feel it when it is not there”, noted Amorim. 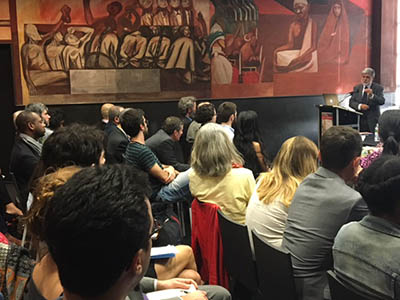 Jose Antonio Ocampo, himself a former Minister of his country, Colombia, and likewise a former colleague of Amorim at the United Nations, offered some comments. He assured that indeed Brazil has a strong leading role in international relations, not only in the South American context, but also as an emerging leader with an exemplary assertive character in global discussions. This assertiveness counters the attitude of many countries in the region, who would not dare “to punch above their weigh”. Ocampo then raised a couple of questions to Amorim in relation to adverse political environment against the United Nations coming from the current US administration. One, the paradoxical role

of China as a champion of globalization, and the second one about due respect for the multilateral system in this new context. Before opening the floor for questions from the audience, Professor Cohen challenged both speakers, questioning: What categories or typologies of political behaviors can guide us to better understand the current state of international affairs? Is what we are seeing a case of destruction, capture or passive demise of multilateralism?.

These and other interesting questions asked by the audience were answered by Amorim and Ocampo, with follow up comments from Professor Fukuda-Parr and Cohen. At the end, Celso Amorim signed books, which were available for those interested. 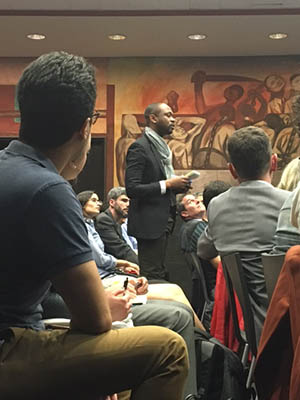 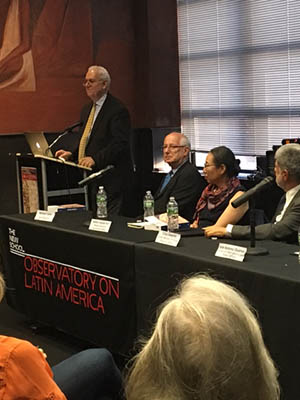