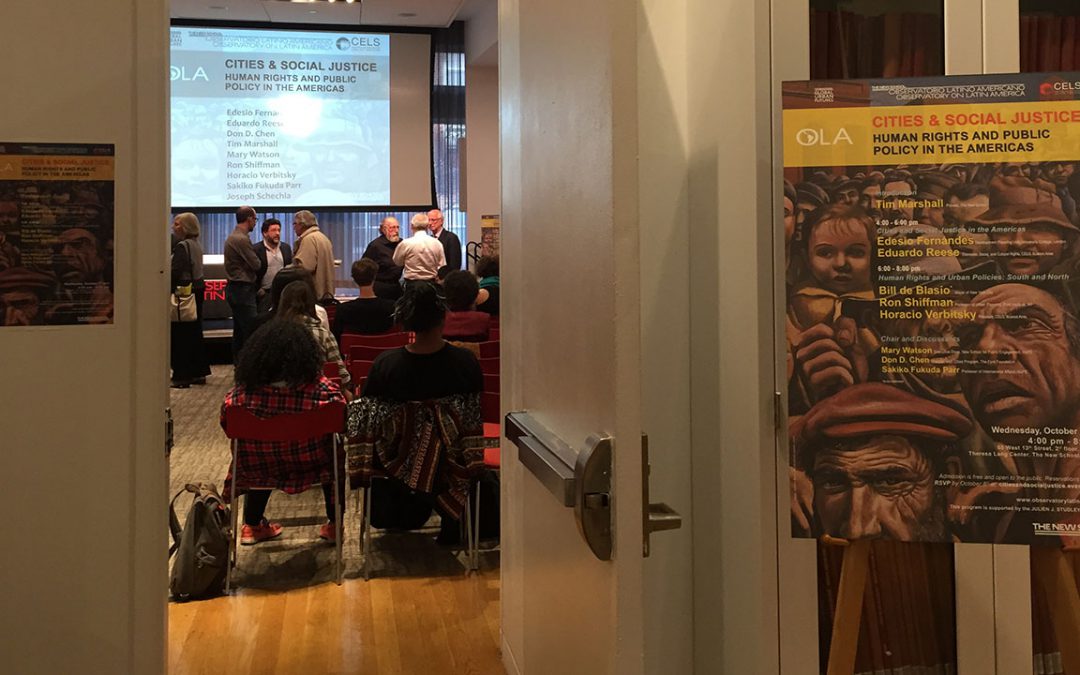 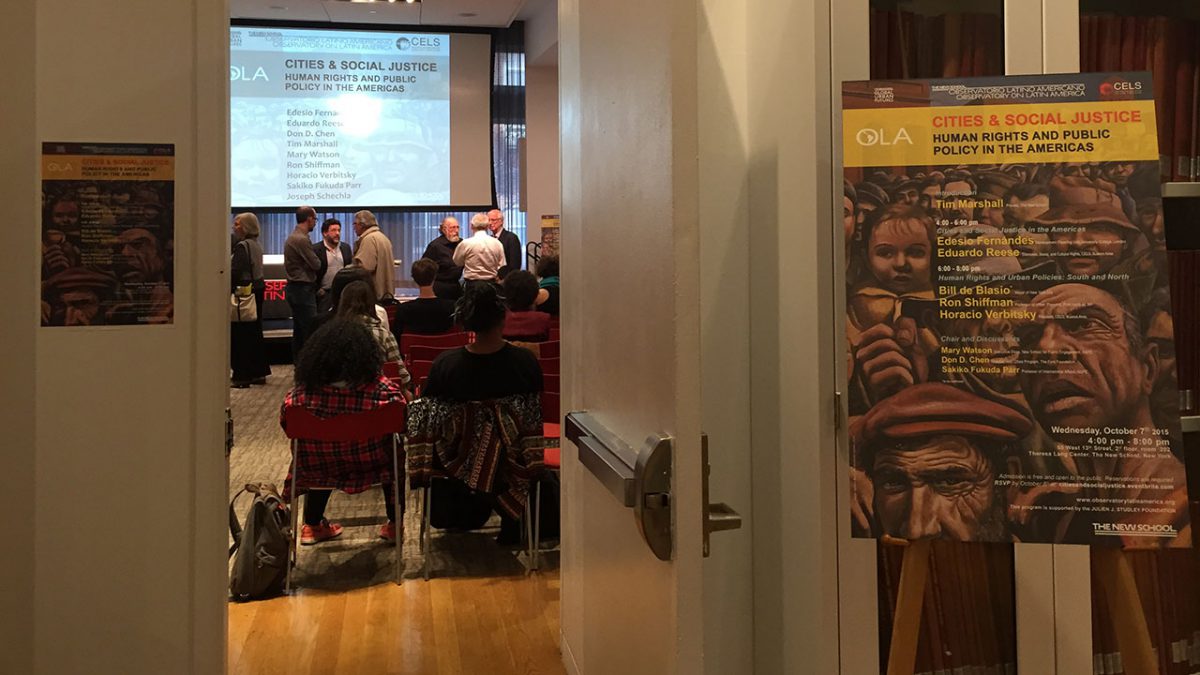 Scholars and activists on the right to the city from Latin America and New York met last October 7th, invited by the Center for Legal and Social Studies and the Observatory on Latin America, to discuss the role of cities as the final locus for the attainment of human rights and social justice.

Edesio Fernandes, Brazilian lawyer who specializes in urban rights, began his talk focusing on new urbanization trends in Latin America. Changing the past trend that shaped the urbanization rates of capital cities during the 70s and 80s, recent rural migrants are now moving into small and middle sized cities. The new pattern of ongoing metropolitanization results in new system of cities common across Latin America. Fernandes insisted that particularly since the 1980s, urban economic production has been characterized by increasing rates of land and property speculation that leads to the commodification and financialization of cities, where even money laundering plays an important part. Public land has not contributed to social justice but has further sharpened exclusion and segregation. Idle vacant properties cause land shortages and increase prices. Hence, democratization of access to land and housing should be the center of the discussion. He claimed it’s necessary to embrace the social function of property, continue the titling, upgrading, and socioeconomic programs, and also further develop tools for decentralization and democratization of decision-making. Fernandes concluded that: “Land property notions, policies, rights, allocation, regularization, values, conflicts, disputes, etc. can no longer be ignored. The key issue to mobilize for is the City itself”. 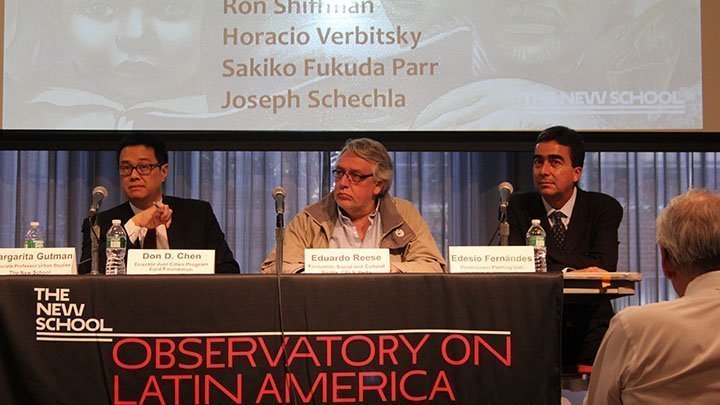 Eduardo Reese, Argentinian urbanist and specialist in economic, social, and cultural rights from CELS, interestingly pointed out that one of the main differences between urbanization processes in developed countries and those in Latin America is that developed countries urbanize first and built later, while Latin America continues to build first and then urbanize. The history of Latin American urbanism is the history of the conflict between public policies in their attempt to solve this issue. The problem, Reese insisted is not the absence of policies, but the elitist character of those policies, that mainly benefit those with easy access to real estate properties. Reese also mentioned the elite’s tendency to self-segregation in gated communities, spaces that embody social and spatial inequalities. He added that urban inequality in Latin America has been the joint result of a speculative real estate market and public policy’s incapacity to get involved in urban development processes that have a true impact. Reese then highlighted the importance of implementing innovative regulations and presented recent policy changes in Argentina such as the Law of Fair Access to Habitat in the Province of Buenos Aires and the National Consensus for Decent Habitat and projects such as those proposed by Habitar Argentina. He finalized by emphasizing once again how important it is to recognize that the main discussion related to urban policies is how costs and benefits of urbanization should be socially distributed. 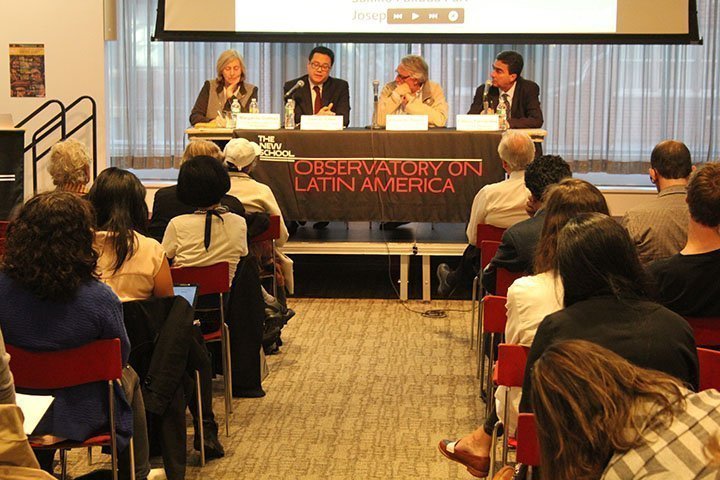 Don Chen, Director of Urban Opportunities at the Ford Foundation, argued that in a rapidly urbanizing world, coping with issues of inequality is ever more challenging, because we must think not only about poverty or income inequality, but also about political inequality. Chen poignantly raised these questions: “Whose cities? Who are cities for? Are they just for the wealthy and those who are well connected? What are the drivers of inequality? What are its historical patterns?” He recognized that in Latin America unequal urbanization has been a matter of who owns property. For Chen, concentration of wealth, but also of power and property are at the core of urban problems. He asked: What are the dominant cultural narratives driving these concentration trends? And then argued that breaking these patterns and actively participating in the process of change is a task that philanthropy must take on. “Academia might be pessimistic, but philanthropy must remain positive about the possibility for change”. 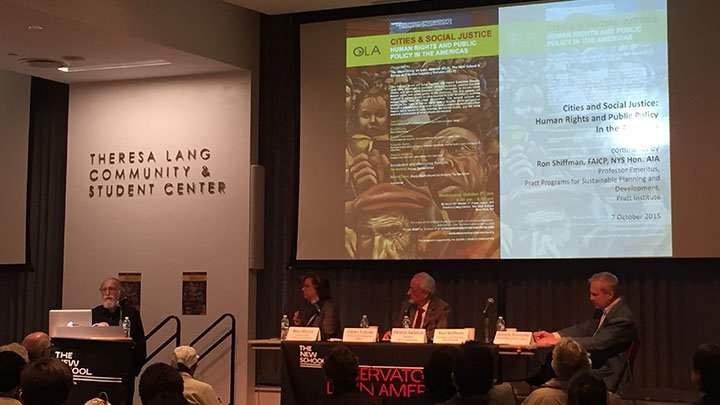 Ron Shiffman, Professor of Urban Planning, at Pratt Institute in New York, surprised the audience with a crisp presentation with a declared inspiration from these Latin American scholars and activists. Part of a tradition of community-driven urban planners influenced by Davidnoff and Maxneff, Shiffman pointed that “New York suffers not form lack of planning or policy but from its elitist nature”. Major Di Blasio won his place much because he pushed the story of a dual city, which springs from the same right-based approach that is so prominent in Latin America. However, Shiffman points: “despite the rhetorical support, one is yet to find practical support for these ideas”. The central argument in Shiffman’s presentation was the idea that “inclusionary housing” (i.e. the policy response to “exclusionary zoning”) has had devastating unintended consequences. Because it is based on a partnership with the developers, these seemingly inclusive urban strategies will further segregation and accentuate gentrification on low-income areas, while leaving whiter areas intact. Ron Shiffman’s message to the Major is that “no action is not an alternative in this case”. Community based organizations from the 70’s based on models learned from Latin America have reemerged. What is key is that these organizations should constitute the basis for zoning norms if the city aims to preserve its diversity and strive for inclusiveness. Planners and activists ought to be observant of false partnerships and should de determined not to be neutral, so that our future is indeed for everyone, for “the North and the South, and the Norths and the Souths within our cities”. 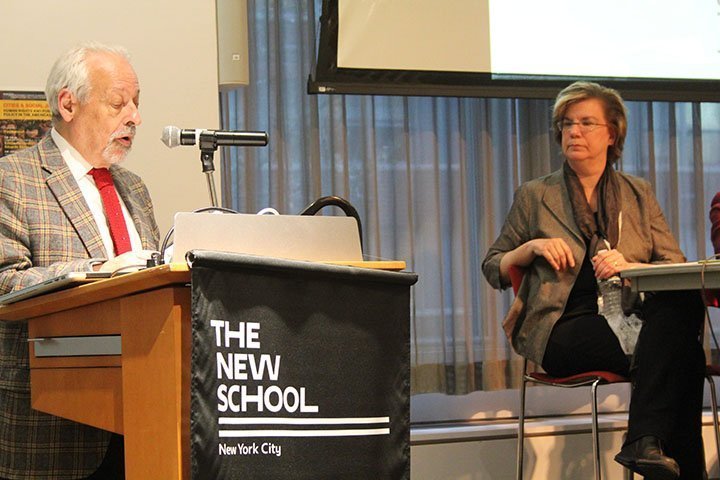 In a similar tone Horacio Verbitsky, president of Centro de Estudios Legales y Sociales CELS in Argentina, claimed that during the last 40 years Buenos Aires Province has been hit by neoliberal urban policies that displace poor people to peripheral areas which not only represent an over cost for the poor but are also environmentally vulnerable (inadequate sanitation and prone to floods). The poor continuously face rights’ violations: involuntary labor informality, reduced educational opportunities, and burdensome access to justice, among other forms of coercion and violence both subtle and overt. Argentina’s state-led progressive agenda is phrased in terms of human rights and economic and social rights. Verbitsky argued that: “The main challenges currently lie in real estate developments and speculation with urban and rural lands, the expansion of the agricultural frontier, agribusiness, extractive industries and environmental harm, which exacerbate social inequalities and particularly affect low-income urban sectors, small farmers and indigenous communities”. Broad coalitions of social and political actors –such as the one that ensured the passage of the Fair Access to Habitat Law in the Buenos Aires Province– are needed in order to strengthen the state’s capacity to regulate property markets and eliminate access restrictions to adequate and decent habitat.

Sakiko Fukuda Parr, Professor of International Affairs at The New School for Public Engagement, stated that in her view claim-making seems to be more vibrant in the South, and particularly at the city level. This is relevant because –she argued-, there can be no real advancement in human rights without responsible activism and well framed social demands. In this sense, she praised CELS’ double agenda: litigation as well as advocacy. 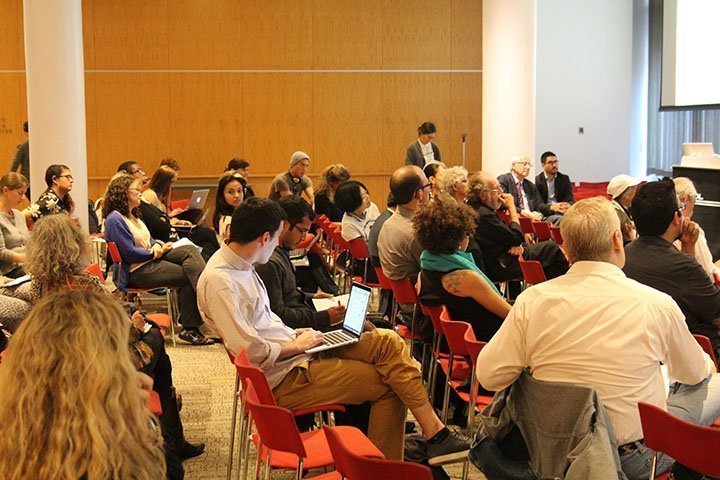 The second discussant to this final panel, Joseph Schechla, Coordinator of the Habitat International Coalition’s Housing and Land Rights Network, brought his perspective from the work done in Cairo, which is very much aligned with the debates described both the first and the second panels. Schechla argued that “cities can be the locus or change”, but if just land systems are not put in place, “they can also be the main blockers of change”. Amidst the Habitat III debate, “which is not much of a debate”, he called for a accurate recognition of century old discussions around the “social production of habitat” and the “social function of property”, which are being revived in so many Latin American urban laws.