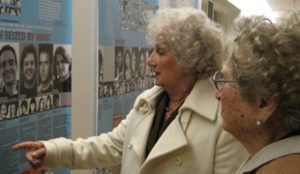 Enriqueta Estela Barnes de Carlotto, president of the Asociación Abuelas de Plaza de Mayo, was at The New School discussing “Memory, Truth and Justice: Abduction of children for political reasons during the dictatorship in Argentina · tracing and reunification”.

The Asociación Abuelas de Plaza de Mayo was established in 1977 in response to the involuntary disappearance of hundreds of children after the military coup in Argentina in 1976, who were kidnapped with their parents or born in clandestine detention centers for young pregnant women. Ms. Barnes de Carlotto joined the Association in 1978 in his quest to locate his daughter, Laura Estela, who disappeared in 1977 and his grandson, who was born in prison in 1978. Since then, Ms. Barnes de Carlotto and the Association have made an effort to locate missing and abducted children to return to their family. They have also contributed to demand the punishment of the guilty and defend children’s rights both nationally and internationally.

After the success of her humanitarian work, Ms. Barnes de Carlotto represents the admirable actions and efforts of the grandmothers of over 400 abducted children, whose fate remains unknown. Her leadership has contributed to the international reputation of the Association of Abuelas de Plaza de Mayo as a defender of human rights of children. Ms. Barnes de Carlotto is also the President of the Argentine Committee for Monitoring and Implementation of the Convention on the Rights of the Child and has written extensively on the subject of children “disappeared” in Argentina.