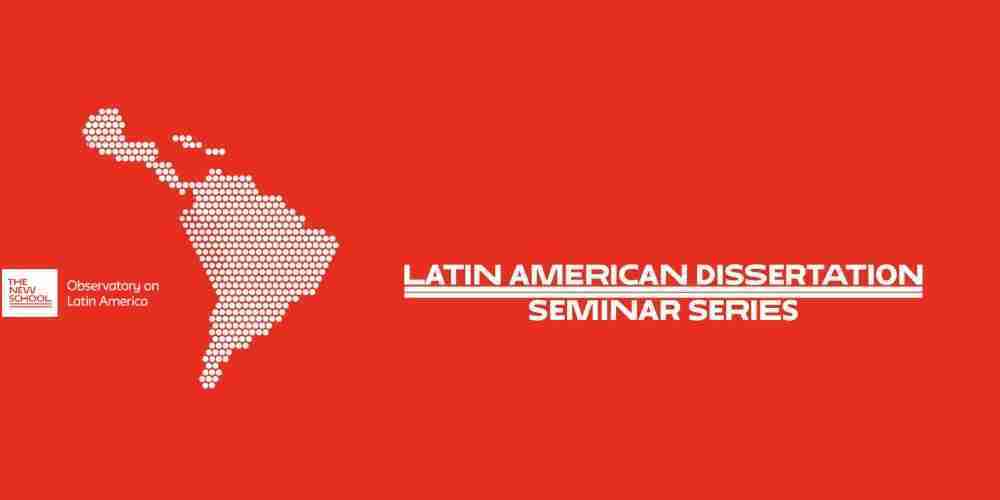 A series of seminars featuring research on Latin America, being advanced as part of the doctoral work of students at The New School’s Public and Urban Policy (PUP) doctoral program. This first panel featured work from:

Dr. Cristina Handal
Barrios más Seguros and the intersections of Design and Policy: The case of Collective Urban Gating in Tegucigalpa, Honduras

David Lopez
Interactions between Economic Development, Housing, and Transport Policies and the Mobility Experience of Workers in Greater Mexico City

Inequality is a persistent characteristic of Latin America. Despite strong economic growth in the early 2000s, improved social indicators, and declines in debt and inflation, it remains the most unequal region in the world. It is also one of the most urbanized regions, and inequality manifests in residential segregation by socio-economic status, and unequal access to basic services and infrastructure, quality education, employment, and health care. Yet, not all cities within the same country show similar levels of inequality, which motivates the primary question of this dissertation: Why are some cities more equal than others? Across six chapters, organized in three parts, I discuss the meaning and dimensions of inequality and illustrate inequality trends in Latin America and Argentina since the 1990s. I demonstrate that the disparity in the urban housing and land market has overshadowed the progress in reducing inequality of income. Drawing on an expansive panel dataset of 30 cities in Argentina, I employ two methodologies to investigate drivers of inequality in cities. Using Lerman and Yitzhaki’s income inequality decomposition method, I demonstrate that the unequal distribution of labor income is the main contributor to income inequality. The persisting wage gap between formal and informal employment plays a particularly prominent role. In cities with more social transfers, in contrast, inequalities are lower. I further deploy a fixed effects regression model to assess city characteristics that may shape inequality. My analysis shows that while federal social and fiscal policy matter, local features of economic development, the local labor market, and demographics also form a city’s level of inequality. Incorporating these local idiosyncrasies in federal policies that aim to reduce poverty and inequality, I conclude, offers an opportunity to reduce disparities in cities. Policies ought to be more holistic and consider variables beyond income. Moreover, local governments should be provided the legislative and financial means to address spatial divides. Only then can we move closer to cities beyond fragments that function as a collective body politic.

Barrios más Seguros and the intersections of Design and Policy: The case of Collective Urban Gating in Tegucigalpa, Honduras.

The aim of this dissertation is to understand the phenomenon of “Safer Barrios” from an integrated policy and design perspective, and propose a different way of bridging the gap between government agencies and communities whose spaces of everyday life are deeply affected by crime. Violence, crime, and fear of crime impact how urban citizens perceive and inhabit cities, and their abilities to co-produce them. In 2011, when crime rates had been on a steady increase in Tegucigalpa, Honduras, residents formed neighborhood associations whose purpose was to restrict access to their neighborhoods by enclosing public streets with gates. After this insurgent initiative began to reduce crime rates, and gain both scale and political significance, it was institutionalized by the city as an official program called Barrios mas Seguros, here referred to as “Safer Barrios.” Even though this phenomenon has continued to develop across Honduras and Latin America, it has remained understudied in urban, policy and design literature, and no connections between “policy” and “design” have so far been studied. With research conducted between 2013-2020, the case study in Tegucigalpa, Honduras aims to achieve two things: first, to explore in detail the unique, collective gating practice and thereby critically contribute to the growing discourse and global literature of urban gating; and, second, to simultaneously argue for a more adequate understanding of the complex relationships between policy-making and designing in the context of what I call “collective urban gating.” Through the case study, the dissertation reveals how the crisis emerging between the lack of public safety policies on the one hand, and bottom-up organizational strategies of organized, self-interested citizens on the other, have spatial and design consequences for both the organization of urban space and form, as well as on the processes of urban policy-making. In order to resolve such a crisis, the dissertation proposes a framework for a design-driven policy-making process.

Interactions between Economic Development, Housing, and Transport Policies and the Mobility Experience of Workers in Greater Mexico City

This dissertation contributes analytical and methodological tools for the empirical investigation of policy interactions in urban policy analysis. To do so, the Policy Interactions Framework (PIF) is developed and applied to explore the hypothesis that urban outcomes are better understood as the result of the dynamics of interactions between policies from different policy areas rather than from any single policy silo. The PIF is applied to the empirical study of the mobility experience of workers in the Mexico City Metropolitan Zone (MCMZ). The study demonstrates that the mobility experience of workers is the result of the interaction between three urban policy areas: economic development policy, housing policy, and transport policy. Furthermore, the production of geographies of low accessibility to jobs is an unintended consequence of the historical interactions among several land use and transport policies and peoples’ survival strategies. An outcome of the dissertation is to develop and put forward the Forced Mobility Hypothesis: a process by which the interaction between the spatial location of the demand for labor, the housing pathways available for the population, and the political economy of public transport operates to produce geographies of low accessibility to jobs.

You can watch the panel discussion in this video. This event was held through the Zoom and was in English on February 4, 2021.