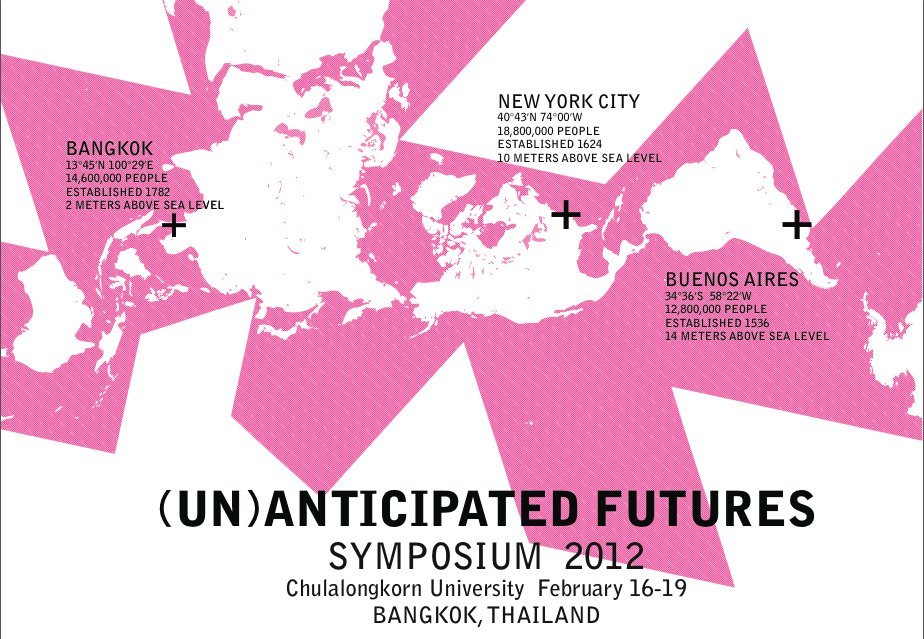 The New School through The Observatory on Latin America (OLA) and Parsons, the University of Buenos Aires, through the School of Architecture, Design and Urbanism and the School of Social Sciences, and Chulalongkorn University, organizers of the Design and Social Development Program, held the first public symposium in Bangkok, Thailand: (Un)Anticipated Futures.

(Un)Anticipated Futures was an international symposium, bringing together innovative research from across three disciplines, three cities, and three universities. This was a pioneering collaboration between historians, social researchers, and designers in a context of unprecedented economic and ecological uncertainty. As financial crisis and environmental disasters appear around the globe, cross-disciplinary and international approaches are urgently needed to address the challenges of urban landscapes increasingly in flux.

Through the analysis of similarities and differences across cities from different disciplinary perspectives, the Design and Social Development Program focuses not primarily on the disciplines themselves but rather on how to build a common language. The program works at the intersection of design and social science in an effort to identify innovative ways of interpreting urban phenomena.

Following on earlier discussions, faculty from Chulalongkorn University, the University of Buenos Aires, and the New School met in Bangkok, Thailand from February 16 to 19, to hold the first symposium on the relationship between design, social science, and history. This tri-partite collaboration involved six faculty members from Buenos Aires, six from New York, and ten from Bangkok. It started with a full day of site visits to low-income areas of Bangkok, followed by a day-long symposium held at the Thai Ministry of Foreign Affairs, where nine papers were presented. Finally, members of the three faculties spent two days in workshops with students at the International Program on Design and Architecture (INDA).

The event was hosted and organized by Dean Bundit Chulasai, through the INDA, directed by Dr. Preechaya Sittipunt, and the active support of New School professor Brian McGrath, on sabbatical in Bangkok. The program was a result of prior discussions led by professor Margarita Gutman held with faculty in Buenos Aires and New York, and discussions led by Brian Grath in Bangkok and New York. It also was supported and energized by the visit of William Morrish, the Dean of the Parsons The New School for Constructed Environments, to Bangkok in October 2011 in which he met with officials at the Ministry of Foreign Affairs in connection with the US-Thai Creative Partnership.

Conclusions of the meeting

The design of the meeting itself involved a combination of field visits, the presentation of nine formal academic papers from the disciplines of design, social science, and history, and faculty interaction with INDA students. Each of these activities was very fruitful and produced specific conclusions, which are briefly summarized below:

The field visits demonstrated both the unique conditions facing Bangkok in terms of its location in a delta, with a pattern of historical development closely interlinked with the management of the river and its many canals, and its similarities with Buenos Aires and New York in terms of its patterns of significant differences between income groups and communities residing in vulnerable areas. The recent rapid growth of Bangkok, both in demographic terms and in its physical environment and infrastructure, impressed visitors from Buenos Aires and New York.

The formal presentation of nine academic papers was organized in three sessions: history, social science and design. It was very productive further demonstrating the parallels and differences between the three cities, as well as some congruency among the three disciplines. The papers were of high quality and appreciated by participants and the larger student audience of 50 INDA students at the Ministry of Foreign Affairs. The hosting by the Ministry was very gracious and well organized, with opening remarks by the Deputy Permanent Secretary of the Ministry, the Vice-President of Chulalongkorn University, and the Argentine Ambassador to Thailand, the Deputy Chief of Mission of the United States, and attendance by senior officials including those responsible for Thai relations with the United States and Latin America.

The two day workshops with students were also very productive and illuminating, allowing interaction between students and mixed teams from the three universities around specific student projects. These interactions highlighted the value of complementary, multi-disciplinary perspectives in framing real world problems and in identifying effective design solutions. The quality of these interactions was the result of excellent student work and the questions and commentary which it provoked. These workshops also included summary presentations of student work, where all faculties could interact with the different student groups and give feedback.

On the final day a summary wrap-up discussion, led by Dean Bundit, was held among all faculty participants where closing reflections were discussed and next steps were agreed upon.

While reflecting on the experience of bringing together three disciplines, three universities, from three cities, it was noted that the symposium’s result was a collective learning process, where individuals were able to learn from their peers and from individuals from other professions. The experience can be applied to thinking about future curricula’, and pedagogies. The process of coming together in Bangkok also allowed for overlapping themes to be identified from each city, and for possible directions of future research to take form. Overlapping themes included: The relationship of the city with water (talking about deltas, canals, rivers); the transformations triggered by crises; and the relationship between the city and its region. When the group was able to discuss these thematic areas, discourse overlapped between disciplines, and a conversation emerged. Identifying these thematic areas is important for our future work.

Read more about the Design and Development Program