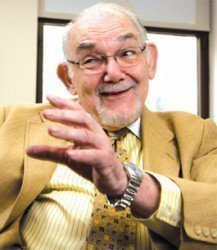 It was with great sadness that we learned today of the passing of Julien Studley, a strong, long-time supporter and thoughtful partner of the Observatory on Latin America (OLA) and the Graduate Program in International Affairs (GPIA) of The New School. From the origins of both programs, Julien was an astute and constructive critic, with ambitious ideas of how The New School could play a significant role in Latin America and the world at large. He attended many events, listened to students and invited speakers, and always provided helpful and insightful feedback.

He was a member of the first GPIA Advisory Committee and provided specific guidance to me on how to build the program, hire faculty, and attract students. He strongly believed in the reinforcing character of combining theory and practice and, from the beginning, provided financial support to develop the GPIA.

He was a strong supporter of the International Field Program (IFP), attending the annual IFP conferences for hours, and later providing quiet, but firm advice on how to better prepare students, how to design the IFP yearly cycle, and to challenge students to grow through a learning experience in the field.

He quickly saw the potential of building an active Observatory on Latin America which could play a significant role in New York, while being actively engaged in the region. He celebrated the OLA’s success, yet never stopped urging us to do more. He was particularly enthusiastic about building a program of academic collaboration with Cuba, the country which received him as a refugee from World War II Europe.

All of this work was further supported in 2011 when Julien made a large financial gift to the OLA and the GPIA, supporting the OLA, the Kirchner Fellowship Program, GPIA faculty research, the IFP, and a visiting Studley Visiting Fellow position. Julien’s generosity has touched hundreds of graduate students, all of the GPIA faculty, and many institutional partners in Latin America and around the world. His quiet, but determined manner demonstrated by example that it was possible to make a difference and all the time, he did so with a touch of humor and unfailing respect for students, faculty, and staff.

In response to his strong support for the GPIA, the University was honored in 2012 to name the program the Julien Studley Graduate Program in International Affairs.

I had the great personal privilege to spend many hours with him over 14 years, discussing how the OLA and the GPIA were growing and the new challenges to be faced. He always asked serious questions, yet he was optimistic and always encouraged me to do more. We will miss him very much.