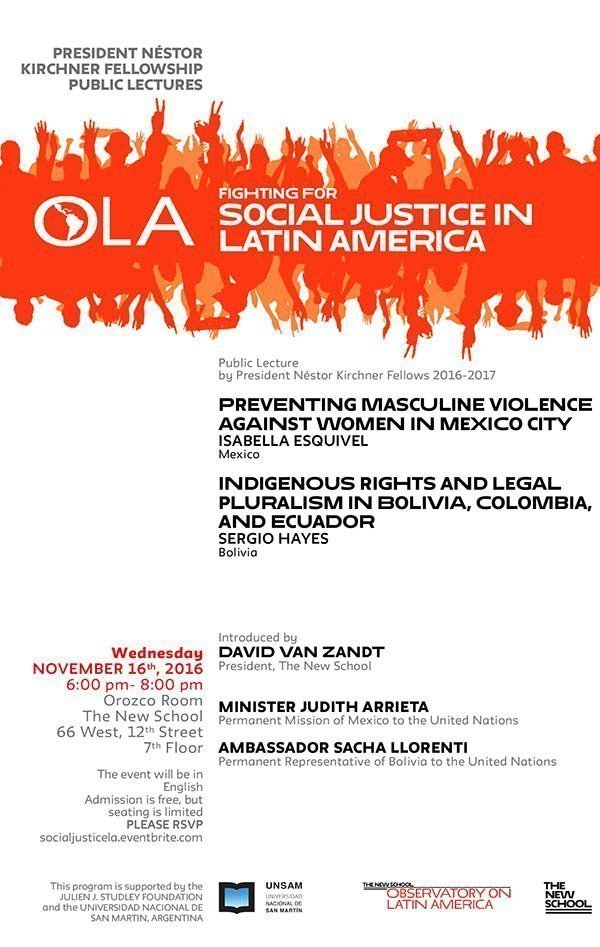 Ambassador Sacha LlorentiPermanent Representative of Bolivia to the United Nations

This study argues for the importance to incorporate men when working to prevent violence towards women. Two main aspects are analyzed, one related to the specificities of masculinities in the Mexico City, where evidence suggests there is a common belief that violence is a prerogative for gender identity. The second one are national and international legal frameworks.

Ms Esquivel is professor at the Master’s Program on Public Policy and Gender at the Latin American Faculty of Social Sciences (FLACSO), where she obtained her Master degree. She also works at Mexico City’s Government as the Executive Director of Organizational Architecture for Administrative Improvement, and has important experience as a consultant.

Mr. Hayes holds a Master’s Degree in Governance and Human Rights from the Autonomous University of Madrid and a Masters in Law from the Central European University in Budapest. He has worked in the Constitutional Court of Bolivia and with the University of Francisco Xavier in Bolivia. He currently works as a pro bono lawyer for indigenous organizations.

The Lecture will be in English.
Admission is free, but seating is limited.
Reservations are required.
Please RSVP by November 15th at socialjusticela.eventbrite.com

THE PNK FELLOWSHIP REACHES ALL LATIN AMERICAN AND CARIBBEAN COUNTRIES, AND WILL AWARD FOUR FELLOWSHIPS FOR 2017-2018
INFORMATION IS AVAILABLE, AND SUBMISSIONS WILL BE RECEIVED FROM
MARCH 1ST TO MAY 22nd, 2017!