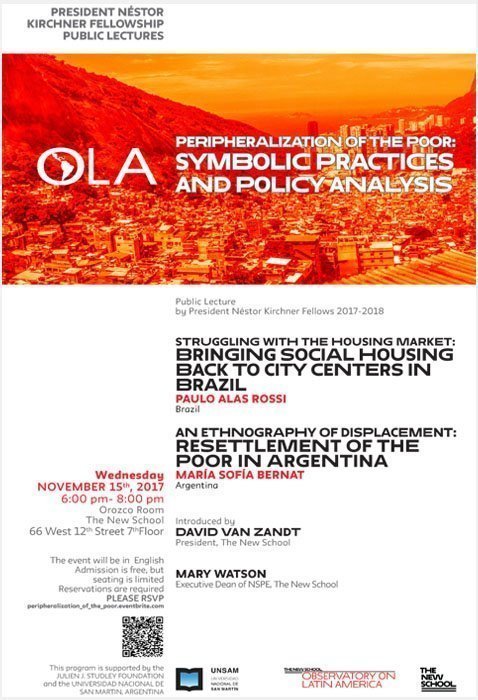 Peripheralization of the Poor: Symbolic Practices and Policy Analysis

An Ethnography of Displacement: Resettlement of the Poor in Argentina
María Sofía Bernat
Argentina

The New School Observatory on Latin America (OLA) and Universidad Nacional de San Martín (UNSAM) are pleased to present, in this 7th consecutive year of the President Néstor Kirchner Fellowship, the 2017-2018 Fellows: Paulo Alas Rossi and María Sofía Bernat, who were awarded this Fellowship after demonstrating academic excellence and a commitment to public service.

Struggling with the Housing Market: Bringing Social Housing Back to City Centers in Brazil, by Paulo Alas Rossi

Mr. Alas Rossi’s research critically analyzes the “My House, My Life” program, the major social housing program in progress in Latin America. This work focuses on the program’s site-selection process by adding a social dimension to an otherwise technical approach. Rossi further explores the interdependence between different actors and their uneven power structures.

Mr. Alas Rossi holds a Master’s degree in Landscape and Environment from the University of São Paulo as well as Master’s degree in marketing management by the INSPER Institute. He currently works at the Ministry of Cities in Brazil monitoring the ‘My House, My Life’ Program’ (PMCMV).

An Ethnography of Displacement: Resettlement of the Poor in Argentina, by María Sofía Bernat

Ms. Bernat analyzes the participation and the modes of organization of the inhabitants of the Ringuelet slum in La Plata, Argentina, from a qualitative and ethnographic perspective, during a relocation process advanced by the government after flooding in April of 2013. She explores the ways in which socio-urban transformations modify the understanding of sense structures as well as ways of inhabiting a territory.

Ms. Bernat is a PhD candidate in Journalism and Social Communication at the National University of La Plata in Argentina, and holds a bachelor’s degree in in the same field. She worked at the civil organization Techo, coordinating the “Community Development” area.

The Lecture will be in English.
Admission is free, but seating is limited.
Reservations are required.
Please RSVP by November 14th at peripheralization_of_the_poor.eventbrite.com