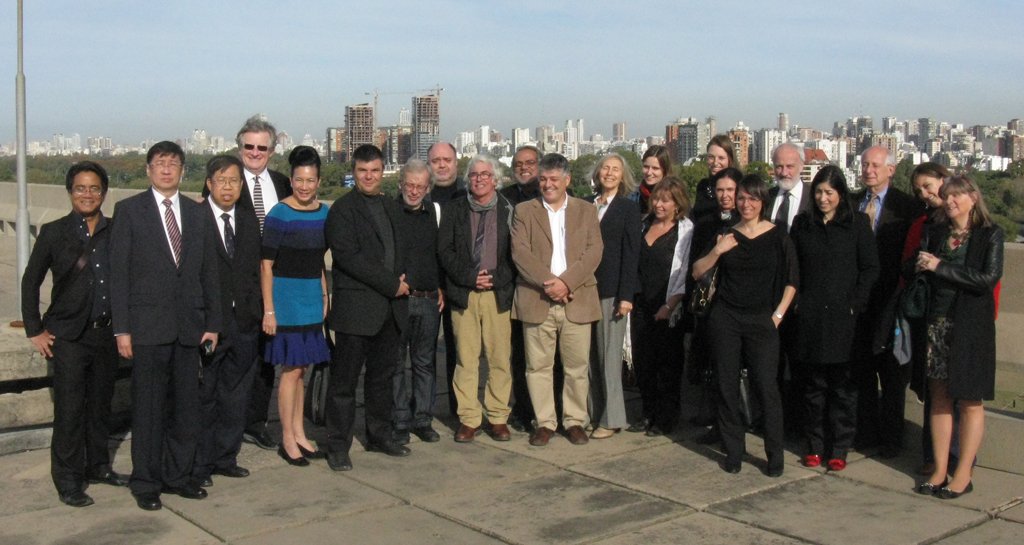 The second International Symposium of the “Design and Social Development” program (1), entitled Urban Transformations and Anticipations: Bangkok – Buenos Aires – New York, took place at the School of Architecture, Design and Urban Planning (FADU) at the University of Buenos Aires (UBA), between 26 and 29 May 2013. The FADU hosted the event which was also prepared and jointly organized by the Observatory on Latin American (OLA) of The New School University in New York, the School of Social Sciences (FSOC), UBA, and Chulalongkorn University, Bangkok, Thailand.

The Symposium brought together designers, social scientists and historians of the three universities to examine how these three disciplines can work together to improve the understanding of the most pressing needs and urban challenges. Contributors focused on the problems facing the most vulnerable sectors, such as social inclusion, access to the city, and the improvement of living conditions, including housing, water, sewage and environmental health. A deeper understanding of the issues at hand is a precondition for more effective urban practice.
Continuing from the first symposium (Un)Anticipated Futures, organized at Chulalongkorn University in Bangkok in February 2012, and the meeting at the 6th World Urban Forum held in Naples in September 2012, the four days of this international symposium in Buenos Aires included several types of activities. 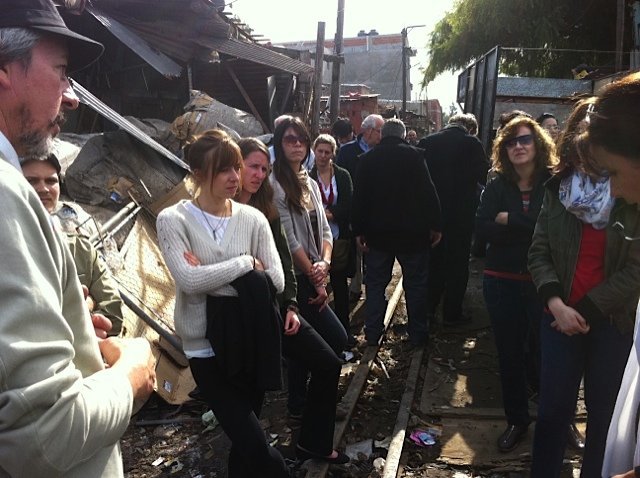 It began with a tour of the Barrio 21-24, one of the largest slums in the city of Buenos Aires, which was preceded by a briefing held at the Center for Innovation and Development for Community Action (CIDAC) of the UBA (2). Having been established for more than 40 years, Barrio 21-24 currently has an estimated population of about 60,000 people (3), comprised mostly of immigrants from Paraguay. It has 64 NGOs providing social and cultural services (4). Their biggest problems include insecure land tenure and property rights, lack of adequate water supply and sewage, severe environmental pollution, and social exclusion.

The analysis of this area and proposals for improvement were the subject of two of the papers presented by the academic team of Buenos Aires at the public session of the Symposium on May 27 (5). Moderated by Ariel Misuraca, this public symposium was opened by the following academic authorities and diplomatic representatives: Eduardo Cajide, Dean FADU; Adriana Clemente, Vice-Dean of FSOC UBA Medha Promthep, Ambassador of Thailand in Argentina, and Mark Naylor, Deputy Cultural Attaché of the U.S. Embassy in Buenos Aires. Professor Margarita Gutman introduced the symposium to the audience, presenting the objectives and the trajectory of the Design and Social Development program as an interdisciplinary and collaborative applied research project of the three universities. Two panels moderated by Guillermo Cabrera and Homer Pellicer respectively focused on Transformations and Anticipations in the three cities (6). They analyzed and discussed social and urban changes, problems and challenges, as well as policies, programs and projects in the Barrio 21-24 in Buenos Aires, as well as comparatively in Bushwick and the East Village in New York, and in the city of Bangkok. A third panel discussed the methodological aspects of complex constructions for applied research, voluntary interventions to participate in public policy, and in the modification of the disciplinary structures of the disciplines (7). This public session of the symposium was closed by Hugo Sirkin, Secretary of Science and Technology of the UBA, who stressed the importance of applied research and interdisciplinary work. 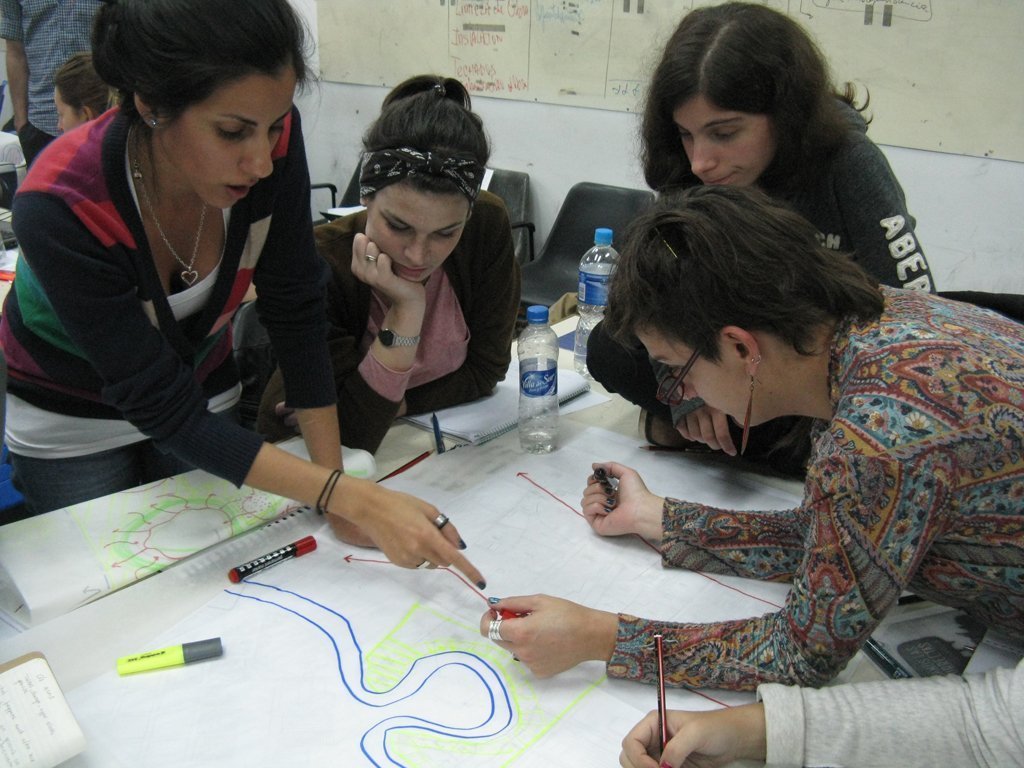 On the third day of the Symposium, FADU Professor Santiago Bozzola (8) led a studio workshop with 50 students from the FADU and 10 students from the International Field Program at the New School, and included 18 young teachers from the FADU. The studio workshop focused on the specific problems of Barrio 21-24, which is located next to a very contaminated river , exploring the ways in which material interventions (spatial and infrastructural) and social changes can address these problems. Groups of students and teachers worked for 10 hours in mixed teams, and then presented and discussed their reports to all workshop participants and faculty from the three universities.

The symposium concluded with the announcement of the final prize, selected by an international jury, from the exhibition “The FADU and Social Development”. This sample showed the social dimensions of the various fields of design covered in FADU. Curated by Guillermo Cabrera, this exhibition included 42 projects submitted by students majoring in textile and clothing design, graphic design, industrial design and architecture. Throughout the international symposium, the exhibition was displayed in the FADU’s Baliero room. The exhibition had previously been on display at the Argentine Consulate in New York. The winning prize was awarded to a student from Textile and Clothing Design and the award will consist of a brief visit to the New School in New York in fall 2013 (9).

The combination of a field trip, a formal and public symposium, a workshop with students, and observations of the academic contributors, was stimulating and enriching and illustrated the potential offered by the complementary perspectives of each of the four modes of inquiry and exchange.
The next Symposium will be held in October 2014 at the New School, New York. It will include the three universities and a broader representation of a network of Latin American universities formed in this second symposium, and another possible network of universities from Southeast Asia. It was agreed that the next Symposium will add “creative and productive cities” to issues of social inclusion that have been developed so far.

Over the four days of the symposium, a series of significant observations emerged:

1. The need to reach a common language of analysis between the three disciplines, demonstrating the richness of complementing disciplinary knowledges.
Presentations of the work in the Public Symposium, which were prepared mostly by teams from each city, showed intense interdisciplinary collaboration in an effort to transpose the formal limits of the analytical models of the respective disciplines of history, social science, and design. Participating academics focused primarily on the processes affecting urban transformations and anticipations. The presentations included greater attention to historical issues, among others. These presentations showed that the processes in New York, for example, changed over time with differing results. For example: the change in the housing stock (presented by Bob Buckley); the change in the neighborhoods (presented by Brian McGrath in regards to the East Village and by Gabriela Rendon in Bushwick, Brooklyn); and changes in the process of perception and use of disciplinary models (presented by William Morrish). One of the commentators, UBA professor, Del Percio, said it was not easy to infer which disciplinary field the presenters came from.
Methodological paradigms of the three disciplines exist in parallel, particularly in discussions facing the challenge of finding the intersections between them and the resulting transformations. These discussions showed the porosity between the boundaries of disciplines.
2. The importance of strengthening urban knowledge as an essential step to improve urban practice at the different scales of the neighborhood, the city, or the metropolis.
Regarding the different scales ranging from the macro and micro, it was suggested that we incorporate an analysis at a mid-level, being equidistant from each extreme and complimentary to specific examples (Ariel Misuraca). It also highlighted the tensions that exist between the various scales and the logic involved in the formulation of strategies and complex procedures (Javier Fernandez Castro). Overall, there was greater attention to the processes, actors, and policies, and less specific focus on the physical conditions.
3. Emergence of new terms for new narratives.
The proposed new terms/concepts, allowed for new narratives such as “socio-spatial rights” (Fernández Castro), “indiscipline” (Del Percio), “city-steading”, “bank time”, “space bank”, “bank of stories” (Rendon). This new language also became an addition to the “footprints of the future” (Gutman) as new narratives were appearing.
4. The notion “footprints of the future” provoked stimulating questions.
The Sky Train in Bangkok is clearly a footprint of the future. But are all footprints the same? Some are like footprints in the sand and are ephemeral, while others are in the mud and maybe last a little longer, while still others are in cement and will remain for a long time. Perhaps we should understand that flooding and other effects of climate change are footprints of the future (Cohen). 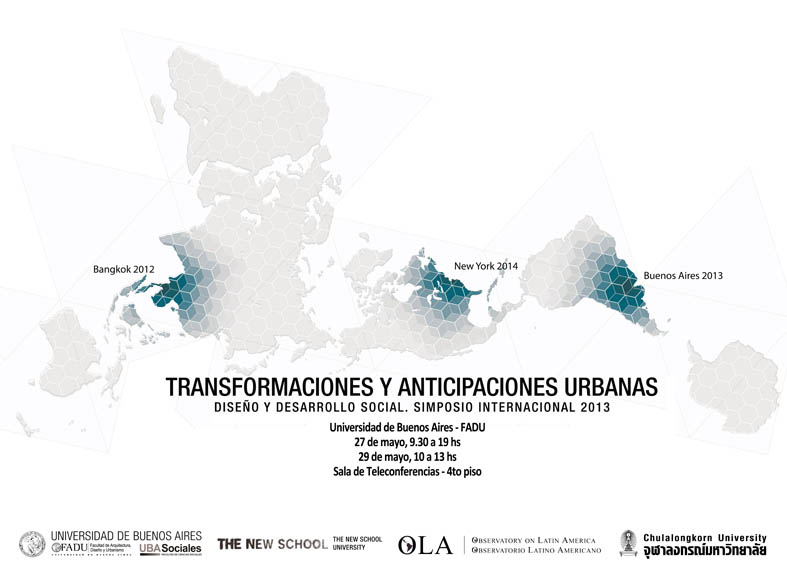 5. Overcoming words/limiting categories.
In order to overcome the reductionist implications of the use of the terminology “formal and informal”, it was proposed to interpret this dichotomy as a continuum composed of different forms of access to circuits of productivity, identifying new forms of production, and in particular investigating their impact on the processes of social inclusion.
6. Design projects, processes and products.
The question was raised “What is being designed? Physical or spatial structures, or processes?” It was stressed that design very frequently means designing processes, not just spaces or values.
7. Thinking “out of the box”.
Working outside existing models or schemes of these disciplines (“outside the box”, or “get out of the tub!” as presented by Morrish) inspires many new questions. Included here would be, among others, the need to pay more attention to the evolution of urban processes through three dimensions: past, present and future.
8. Construction of new paradigms.
It was emphasized that the construction of holistic paradigms and the complementarity of the disciplines will take time. The question was also raised regarding the formulation of the criteria for success within collaborative work and its subsequent evaluation (Carolina Mera and Cecilia Hidalgo). When asked if we are changing our analytical models, the answer as “No, not yet!” (Morrish).

(1)The “Design and Social Development Program” has been formally established in the respective academic institutions: FADU and FSOC, UBA, and the Observatory on Latin American (OLA) of The New School.

(3)Data provided by informants from the neighborhood. According to the 2010 national census, the population of Barrio 21-24 is officially 31,066 inhabitants.

(7)This panel included members of the teams of the three universities, in addition to Enrique Del Percio, Cecilia Hidalgo, and Roberto Doberti.

+ Download the program of this event: cover and inside (.jpg)

+ See the abstracts of the presentations from the Public Session of the International Symposium (.pdf)

+ Read the article Transformations: Historical Precedents and Social-spatial Diagnosis of the Villa 21-24, in Spanish  (.pdf)

+ Read the article Anticipations: Anticipating in Barrio 21-24, in Spanish (.pdf)

+ Read a Synthesis of Meandro Workshop by Professor Santiago Bozzola, in Spanish (.pdf)

This program is supported by the JULIEN J. STUDLEY FOUNDATION
Loading view.
April 2022