Southern Explorations in Design and Social Development. Panel by Faculty from FADU-UBA and The New School 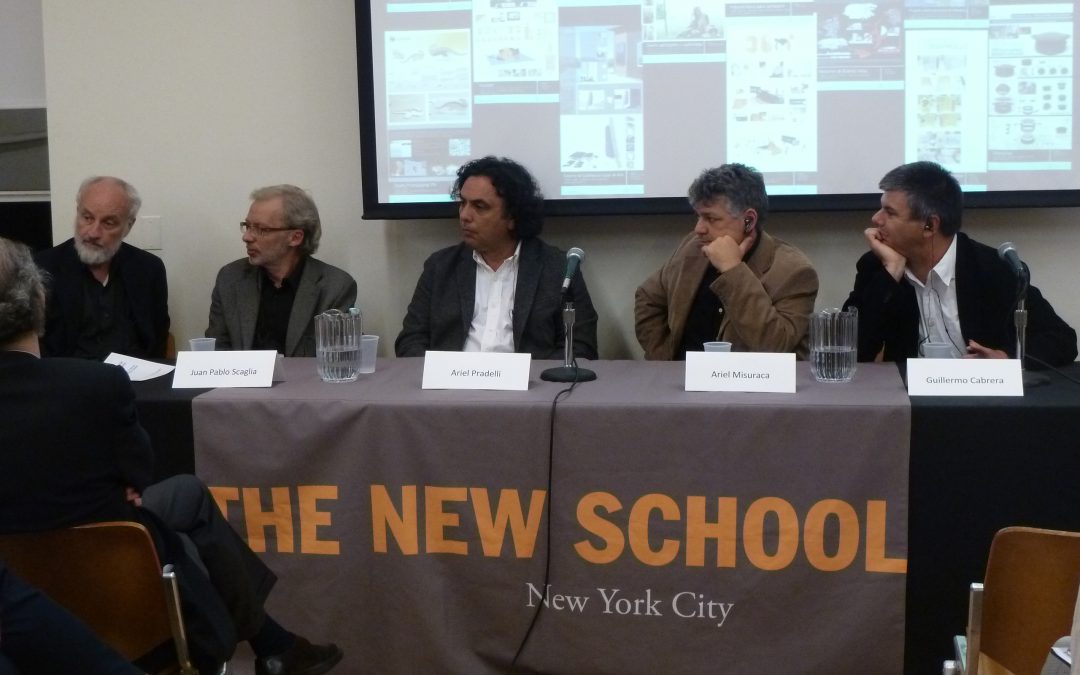 On April 10th, four panelists from the School of Architecture, Design, and Urban Planning at the University of Buenos Aires (FADU UBA) were invited by the Observatory of Latin America and the Consulate of Argentina to present their current challenges, tools, and the results of training their 23,000 students, to use design as a tool for social development.

Margarita Gutman, OLA’s Director of Programs and Professor both at the New School and FADU, introduced the panel by framing it as one of OLA’s current evolving programs, Design and Development. The program is a collaborative effort among research teams from three universities: Chulalongkorn University in Bangkok, Universidad de Buenos Aires and The New School. Its aim, Gutman explained, is to “identify the footprints of the future in the present” and as such, it builds not on disciplinary realms, but on their intersections.

Guillermo Cabrera, Provost at FADU, opened the panel with a general presentation of FADU’s structure. UBA is 191 years old, is public, and free to its students. “The School of Architecture was born in 1948, and restructured in 1983, along with democracy in the country”, pointed Cabrera. He added that work from its six Programs, 23,000 students, 2,800 teachers and 150 courses, produces strategies, not mere products. More so, he asserted 35% of this work is centered on social development, whereas 3 decades ago, it was only 5%.

Ariel Pradelli continued the presentation with work at the undergraduate level, which is a fundamental social development strategy in itself. Pradelli stressed the fact that Buenos Aires’s villas hold the majority of its population and yet are poorly serviced. Over the years, those vast peripheral and excluded areas have been used as housing laboratories, though most of the experiments are far from successful. Yet, as FADU students have found out (and this is something happening in Architecture Schools all over Latin America) it is there, in the underserved poor neighborhoods, that there is available land for development. Pradelli showed participatory work from students and the community, for the development of a new centrality of 700 Ha in one of these villas.

Ariel Misuraca followed, depicting research as one of the main transversal activities that “weave” together FADU’s six academic programs (Graphic Design, Industrial Design, Fashion Design, Architecture, Landscape and Urban Planning). The School has 123 research projects, clustered in 13 research programs, 23 research centers and three of the University’s six research institutes. Of all this work, almost 40% is focused on social development. Misuraca then explained that one of the main means of transferring all this knowledge is through contracts and extension projects with the government. 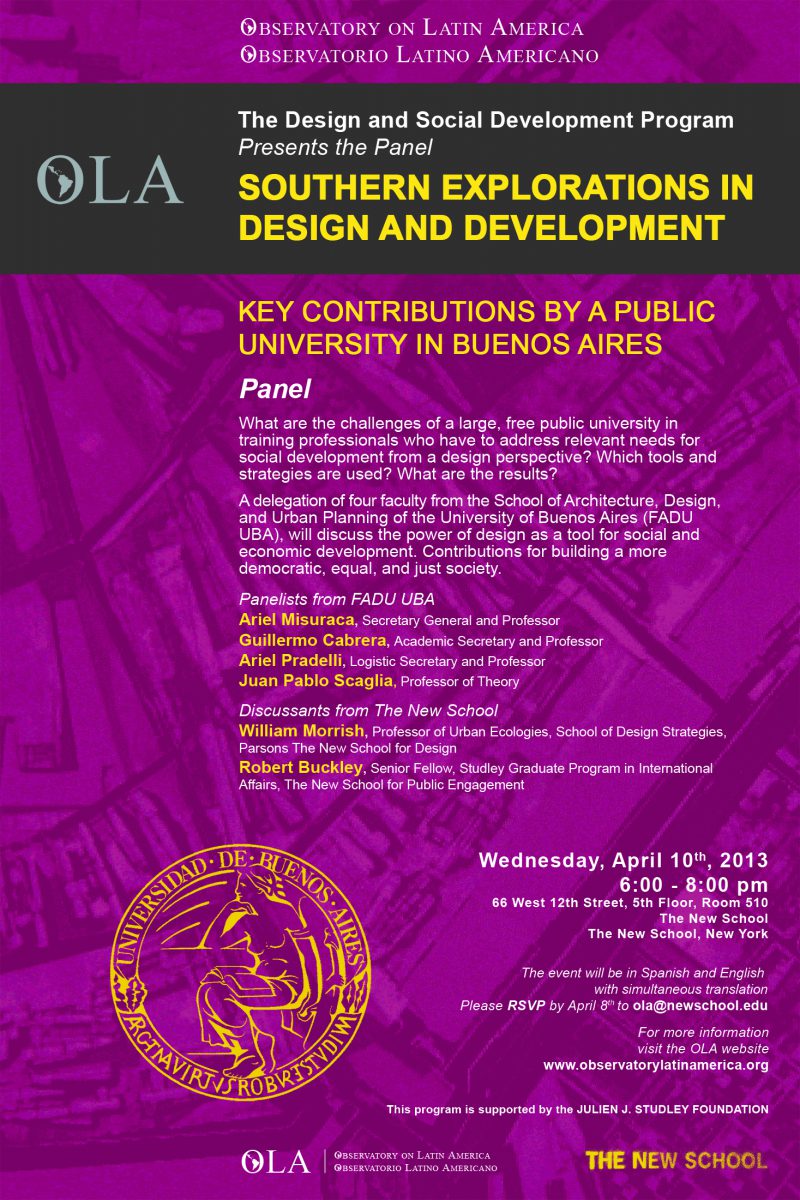 Juan Pablo Scaglia spoke about the School’s broad involvement with the government. Today, FADU has 190 contracts with the Government of Argentina. This broad relationship follows the declaration of UBA as a “privileged consultant agency of the State” by national decree. Using a contract with the Ministry of Social Development as an example, Scaglia explained how the face-to-face encounter with entrepreneurs allowed both students, teachers, community, and government, to better understand how design could offer pro-poor initiatives, not in the realm of protection, but in marketing (a stance very much in line with Argentina’s labor policy, as presented in this OLA event).

Reacting to the panel, Robert Buckley, Senior Fellow from the Studley Graduate Program in International Affairs, commended FADU’s accomplishments. Buckley assured “everything begins with architects having social concerns, however,” he continued, “these efforts are not enough”. In clear reference to the Matanza’s 700Ha project, he shared one story from a project in Ethiopia. A set of high-rise buildings were designed to resettle on-site slum dwellers, which, once constructed, turned out less successful than intended, because slum density was far higher than what official censuses claimed. Buckley recognized the power design has to upgrade living spaces, but stated that “design must learn finance” and “design should design fiscal policy” if its beautiful spaces are to be kept for the poor instead of captured by real estate’s savage capitalism.

William Morrish, Professor of Urban Ecologies at Parsons and an architect himself, was inspired by the vastness of FADU’s scale and the potential of its relationship with the government. Morrish was interested to learn: “what is the real impact of the transformation intended by these contracts between the university and the government?”; “How does that intended “weaving” really take place?” Because, he added, interior design has much to teach architecture about marketing, and fashion design about microenterprise, for example. But above that, Morrish seemed puzzled about how FADU is able to be ahead of the curve, of such a monumental curve: “What is the city that emerges from all government’s requests?”; “What is the new economy this relationship produces?”; “How does the future look through the lens of 23,000 students?”

The panelists received numerous questions from the audience, which triggered comments from all of them. By the end, Margarita Gutman closed the session and invited everyone to join the Exhibition “Challenges of Design and Social Development at FADU UBA” taking place at the Consulate of Argentina in New York, April 11 to April 25.

The event was in Spanish and English, with simultaneous translation
Please send your RSVP by April 8th to ola@newschool.edu